According to a story in Thailand’s Nation newspaper, quoting Thai chief technical officer Cherdphan Chotikhun, a contract has been signed for the long-decommissioned jets – though he did not identify the buyer. 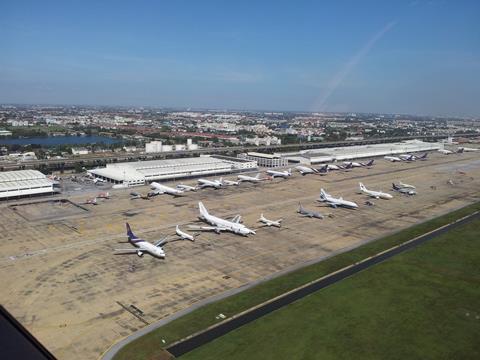 He adds that the transport ministry still needs to approve the sale, and that the aircraft fetched a price higher than their assessed value.

Thai did not reply to FlightGlobal’s request for comment.

Chotikhun says that the airline’s restructuring amid the coronavirus pandemic laid the groundwork for a successful sale.

“In the past, we were bound by regulations of state firms, which gave us almost no chance to sell the decommissioned planes,” he is reported as saying.

“As a result, THAI had to shoulder the cost burden of the decommissioned planes for years.”

Originally Thai operated 10 A340s, but one example was purchased by the Royal Thai Air Force for use by the country’s royal family. The remaining A340s have been stored at Bangkok’s Don Mueang International Airport.

Cirium fleets data indicates that the carrier has a total of 53 widebodies in storage, while its in-service fleet amounts to 40 aircraft.