When Gulfstream sent out invitations to a public event in Savannah, Georgia, on 14 October 2014, everyone expected to see the unveiling of a new aircraft. Rumours and internet mentions of Gulfstream’s secretive P42 project had been swirling for several years, suggesting a replacement for the G450/550 was already deep in development.

On the appointed day, Gulfstream fulfilled those expectations by dramatically “rolling-in” the prototype of the G500 into a newly constructed, black-draped final assembly hangar filled with thousands of employees and invited guests. The surprise of the highly anticipated event was the revelation that the company was also developing a second aircraft – the G600.

The G500/600 would follow a proven Gulfstream formula. The GV entered the market in the late 1990s as a stretched and longer-range version of the GIV, which had first appeared a decade earlier. Early in the 2000s, Gulfstream replaced the GIV/GV with another pairing in the G450/G550, although both were derivatives retaining the 30-year-old fuselage cross-section and wing design of the original GIV.

As the aircraft designations suggest, the G500 and G600 represent the beginning of a new aircraft family, rather than yet another derivative of the classic GIV. Not for nothing has Gulfstream omitted a G400 from its future product line-up. Rather than directly replace the G450/550 with improved models, the G500 and G600 bracket the performance and cabin size of the G550, while the G600 is positioned between the G550 and the ground-breaking G650, which entered service in 2012.

The sizing metrics neatly align with the G600’s positioning in the Gulfstream product line-up. As a clean-sheet design, the G500 and G600 share the same fuselage cross section of 2.41m (7ft 11in), which splits the difference between the G550 and G650. The G600’s cabin is 17.8cm wider than the G550 and 17.8cm narrower than the G650. The additional width of the G650 provides a nearly 12% advantage over the G600 in cabin volume, despite only a 45cm difference in cabin length.

Like most business jet manufacturers, Gulfstream often launches a new aircraft design with a conservative range estimate, then adds mileage to the type’s endurance as flight testing validates more optimistic assumptions. It is not yet clear if the G600 has room to improve. As listed on the sales brochures, the G550 flies 8% farther than the G600, but at a roughly 5% slower long-range cruise speed. The G550 needs only 6% more fuel capacity than the G600, but each is nearly identical in take-off weight despite the latter’s longer and wider fuselage.

To be sure, the G500 and G600 share more in common with the speed and technology of the newer and significantly more advanced G650 than the G550.

Launched internally in 2005, the G650 was perhaps Gulfstream’s most ambitious clean-sheet development project. With three cabin zones including a crew compartment, the G650 can traverse distances up to 7,000nm (13,000km) at Mach 0.85. Its slightly tweaked sister, the G650ER, can fly up to 7,500nm at the same speed.

With the G650 Gulfstream changed how it assembled the aircraft’s metallic structure, replacing thousands of rivets with bonded stringers. The G650 also pioneered how Gulfstream applies composite materials in the primary aircraft structure, with GKN/Fokker’s unique induction welding process used to create a thermoplastic composite empennage. 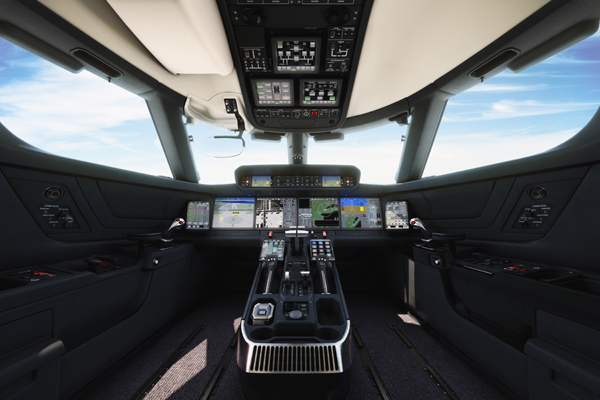 Internal development of the G500/G600 began five years later, as Gulfstream was still shepherding the ambitious G650 through an extended flight-test campaign. The G650 offered an attractive starting point for Gulfstream’s engineers designing the systems, performance and flight controls of the new family of aircraft, while setting the stage for injections of new technology in the cockpit, systems network and – most dramatically – the propulsion system.

The relationship between Gulfstream and Rolls-Royce dates to the business jet manufacturer’s origins as a division of Grumman in the late 1950s. R-R Darts powered the Gulfstream 1, Speys drove the Gulfstream II and III, Tays pulled the GIV/V-series and BR725s finally propelled the G650s. Despite this long relationship, Gulfstream opened the G500/600 powerplant to competitive bids in a secret selection process staged around 2010.

R-R appeared to have the advantage in the early days of the competition. Its latest offering in the business jet market, the RB282, had already won a position on Dassault’s SMS programme in 2008. But the global financial crisis forced the French manufacturer to shelve SMS for a few years, and when it reappeared as the Falcon 5X, it was powered by Snecma Silvercrest engines. By then, Gulfstream had also decided to break from a nearly 60-year exclusive relationship with R-R on large cabin engines. The RB282-based bid lost to the Pratt & Whitney Canada PW800.

Montreal-based P&WC was known mostly for its legendary turboprop engines, but it was also an established supplier of turbofans for small- and medium-sized business jets. The company’s ownership by Pratt & Whitney, however, gave it a new opportunity. By 2008, the PW1000G geared turbofan was attracting interest from makers of narrowbody airliners and regional jets. It would eventually be selected on five aircraft families, including a competitive position on the Airbus A320neo.

By scaling down the thrust rating, P&WC could repackage the engine core of the PW1000G – which includes the eight-stage high-pressure compressor, Talon X combustor and two-stage high-pressure turbofan – with a new low-pressure section lacking the reduction gear. This new engine, the PW800, would also use conventional metallic fan blades rather than the hybrid aluminium material used in the PW1000G family. In 2008, Cessna selected the PW800 to power the midsize Citation Columbus business jet, but the project was cancelled in 2010 amid the same market slump that shelved the Dassault SMS.

With one of the few development projects still going in 2010, Gulfstream was in an attractive position to receive bids from suppliers, and P&WC’s offering proved persuasive. Accordingly, Gulfstream selected the PW814GA for the G500 and the PW815GA for the G600. The engines use identical turbomachinery and accessory hardware. A software change alone on the PW815GA commands the full authority digital engine control (FADEC) to generate almost 15,700lb (70kN) of thrust for the G600, or about 540lb more thrust than available continuously on the G500’s engine model.

In most other supplier decisions, the incumbents selected for the G650 fared better on the G500 and G600. The G650 pioneered a fly-by-wire architecture developed in partnership with Parker Aerospace, BAE Systems, Moog and Thales. Similar versions of the same architecture have proliferated around the class of commercial aircraft smaller than Airbus and Boeing designs. It can now also be found on the Bombardier CSeries, Embraer's Legacy 500 and its military KC-390. A second generation of the same fly-by-wire system found on the G650 was developed for the G500 and G600. 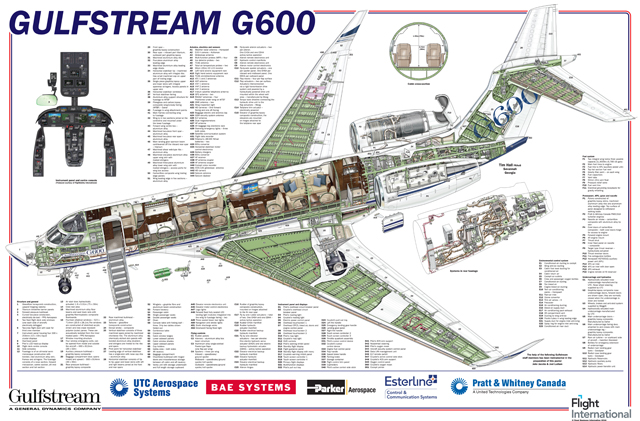 Honeywell is another supplier boasting a long history of partnership with Gulfstream. Together, the duo developed the first integrated avionics systems for a business jet in the original GIV. By 2003, the partners had teamed up to adapt Honeywell’s PrimusEpic flightdeck system into Gulfstream’s PlaneView cockpit for the G550. Several years later, the G650 would introduce the PlaneView II, retaining the four multi-function display layout and adding cursor control devices (CCD) and updated software.

For the G500/G600’s Symmetry cockpit, Gulfstream and Honeywell continued to push the state-of-the-art forward, re-imagining the pilot-vehicle interface. The flight crew now interacts with 10 displays controlled by the CCD or simply the touch of a finger.

In an age of boundless data capacity, the challenge is to frame all that incoming information in a way that makes the pilots’ jobs easier instead of more complicated. The Gulfstream/Honeywell partnership attempts to achieve that elusive goal with a flight management system (FMS) programmed to offer data in five categories corresponding to the phase of flight: start-up, taxi, take-off, en route and arrival. Much as a restaurant offers different menus for breakfast and dinner, the G600 FMS displays the data most relevant to the pilots at that moment. For instance, the start-up phase menu provides information about fuel, weights, and a summary of altitude and speed data for cruise flight. In take-off mode, the FMS displays the relevant V-speeds, obstacle height and runway number and available length. If the pilots need different information, a swipe of the screen brings up a 12-page settings menu.

As Gulfstream has re-invented how pilots manage and interface with data, the G500 and G600 also revolutionise how the crew of a commercial aircraft interact with a fly-by-wire flight control system. Besides a small weight reduction, fly-by-wire technology gives the aircraft designer the ability to establish a set of envelope protections, reducing the odds of a pilot inadvertently losing control or exceeding load limits. But that benefit has come at the expense of de-coupling the mechanical linkage between the pilots’ controls, so the pilot monitoring is not directly aware of what the pilot flying is commanding. Sidestick controllers are also not back-driven and so provide no artificial feedback of the loads the aircraft is experiencing as the pilot inputs commands.

Gulfstream’s new cockpit for the G500/G600 suggests designers no longer need to make that trade-off. Using active sidestick controllers developed by BAE, an input by the pilot flying is replicated on the controller used by the pilot monitoring. At the same time, the pilots are also protected by traditional fly-by-wire control laws. 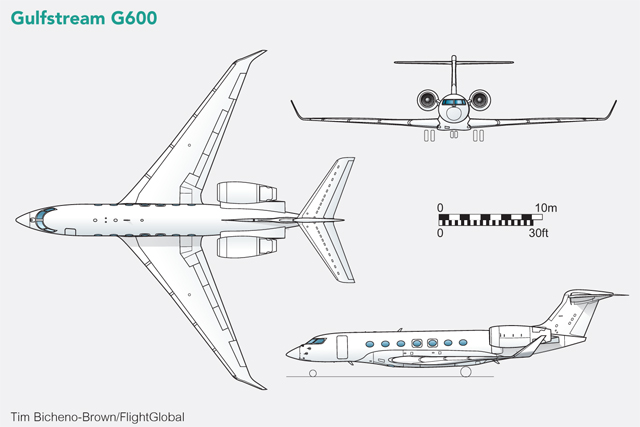 Another innovation in the G500/G600 is found at the level of aircraft wiring. A decade ago, GE Aviation Systems developed the common core system for the Boeing 787, which distributes the connections to non-flight-critical electronic systems into a high-speed network of remote data concentrators and interface units. This offers a number of advantages. First, electronic components need only connect to the nearest data concentrator, rather than require wiring to be run all the way back to an electrical equipment bay. The electronic connections themselves are also smaller, reducing weight.

Moreover, the architecture of this data concentration network allows for vastly more flexibility. If an aircraft upgrade requires installing a new electronic system, it is no longer necessary to run new wiring all the way through the aircraft. The upgraded component can simply be connected to the nearest data concentrator, providing quick access to the entire aircraft network with one connection.

In structural terms, the G500/G600 follows the architecture established by the G650, but the details have changed. The G650 uses some aluminium-lithium components, but the G500 and G600 are the first Gulfstream aircraft to use such lightweight material for the stringers inside the wings. The G650 also pioneered the use of thermoplastic composite in the empennage control surfaces, but Gulfstream took a different approach with the new aircraft family. The rudder, stabilisers and elevators of the G500/G600 are made using a thermoset composite which is cured on a tooling mould that collapses from within.