The roll-out of the 10,000th 737 at Boeing's Renton, Washington plant marks an impressive milestone, not just in terms of production volume but also from a product longevity perspective. And it is appropriate that the recipient of the 10,000th aircraft will be Southwest Airlines as the carrier heads the customer list for all-time deliveries. 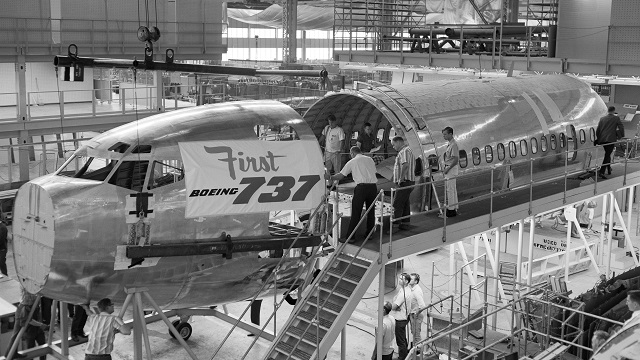 The first 737 – a Pratt & Whitney JT8D-powered version (above) – made its debut more than half a century ago. Since that first 737-100 was publicly unveiled on 17 January 1967, the little Boeing twinjet has been through three major design updates, each married to the adoption of a new-generation engine.

The 737's build numbers and production longevity are unprecedented in jet airliner production, although its big brother, the 747, is not far behind in the latter criteria – the first having flown in 1969.

Since the A320 arrived three decades ago this month, Airbus has been working hard to catch the 737 and become king of the single-aisle sector. The 737 had a 20-year head start and had reached around 1,500 deliveries when the first A320 was handed over in March 1988.

Flight Fleets Analyzer shows that during the first decade or so of A320 production, Boeing extended its lead to 2,500 aircraft. But since 2001-02 Airbus has been gradually clawing back its rival's advantage. The 737's lead is now around 1,900 units, with Airbus having delivered its 8,000th A320 in February and on course to pass its own "10k" milestone in around three years' time.

Over the first half-century of 737 production, output has ebbed and flowed with the boom times and downturns. Overall, annual deliveries have averaged around 200 units across the 51 years of production.

Early on, the 737 assembly line was located at Boeing Field south of Seattle before transferring to Renton alongside the Boeing 707 and 727 in 1970. During the first 20 years, annual production was generally within the 50-100-unit band. With the arrival of the initial CFM International CFM56-powered variants in 1984, annual production ramped up into the 100-200 band. 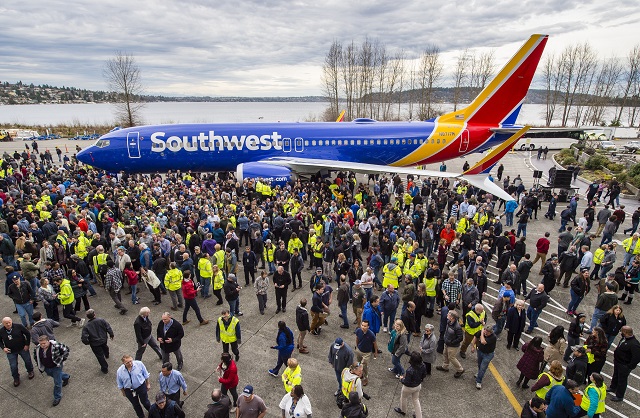 Following the introduction of the CFM56-7-powered 737NG in the late 1990s, Boeing's pursuit of a "pile it high" strategy pushed annual production up into the 280-300-plus band, peaking at a then-unprecedented 320 units in 1999. However, Flight Fleets Analyzer data highlights how Seattle slashed output in the wake of 9/11 – which was when Airbus began making serious inroads into the single-aisle market as it continued steady A320-family production.

The CFM Leap-1B-powered Max entered series production last year. Dual production of the 737NG and Max is set to continue for several years as Boeing transitions to the new family. To date, Boeing has delivered over 6,700 NGs (over two-thirds of total 737 production) and around 100 Max aircraft. 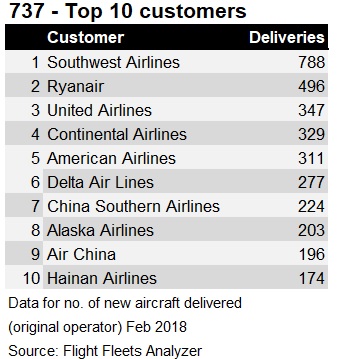 Southwest has been a customer for each major iteration of 737, taking its first new -200 in 1971. In terms of number delivered to original operator, the Dallas-based carrier leads the pack having received just short of 800 737s to date. Ryanair is the second-highest recipient, with 496 deliveries to date. However, United Airlines and its merger partner Continental Airlines are ranked third and fourth with 347 and 329 deliveries respectively, putting their combined total at 676 aircraft.

While airlines have been the predominant recipient of Boeing's twinjet, it has also found strong appeal in the military and corporate sectors. The first military 737s were T-43 navigator trainers for the US Air Force, with 19 aircraft delivered in 1973-74. Flight Fleets Analyzer shows that around 130 737s have been delivered in various military roles including airborne early warning and maritime patrol.

Success in the corporate sector has been even greater, with over 170 737s delivered as dedicated "BBJ" business jet variants. 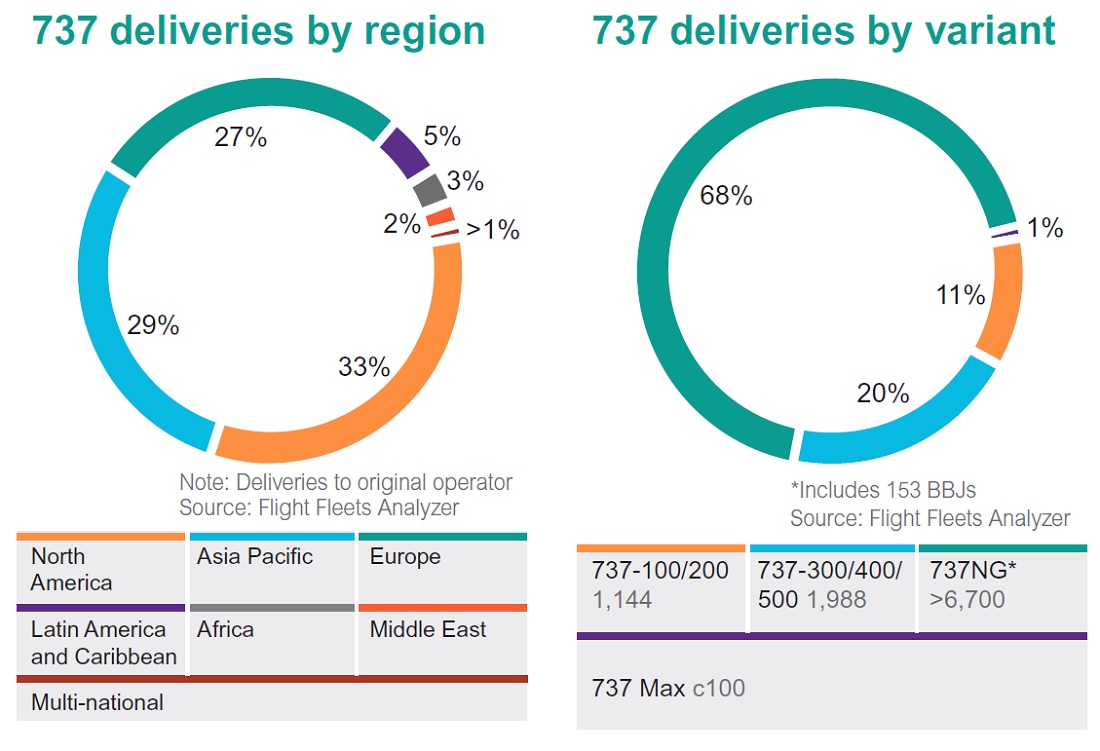 Flight Fleets Analyzer identifies that Boeing's home market of North America leads the 737's global distribution ranking, with a 33% share. Asia-Pacific represents the second-largest market, with a 29% share. In contrast, this region is the largest for the A320 family, with a 36% share.

With Boeing holding a firm backlog for over 4,600 737s, the manufacturer looks set fair to easily deliver 15,000 aircraft. But when will Boeing decide to call time on the ubiquitous twinjet and what will it successor look like? It certainly has a hard act to follow. 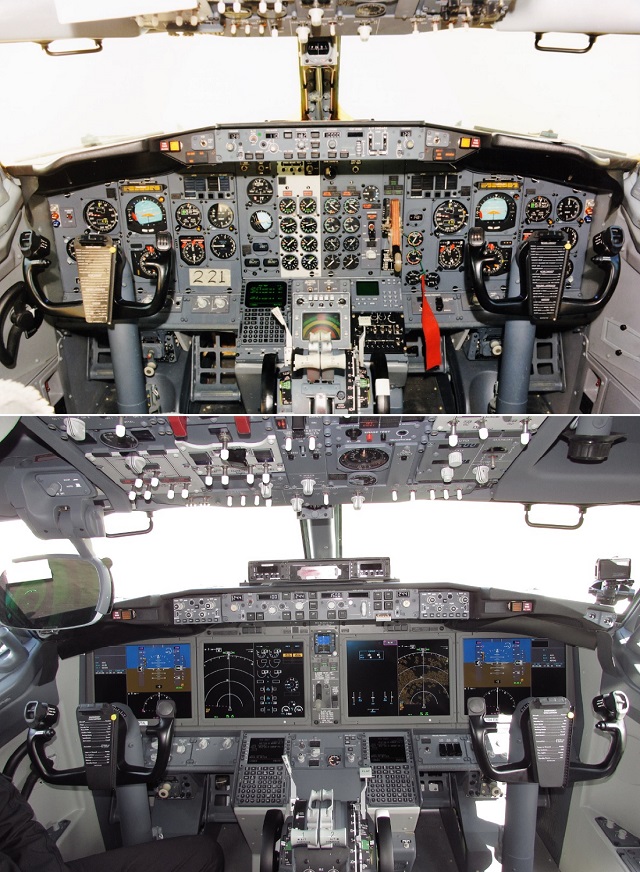