NASA Administrator Mike Griffin says extending the life of the space shuttle past its planned 2010 retirement to ferry crews and cargo to the international space station (ISS) will cost the agency $3 billion per year a pose a one in eight chance of losing a crew to a vehicle failure over the 10 flights needed to span the gap until the new Ares 1 man-rated booster goes operational in 2015.

Speaking at Space Transportation Association-sponsored breakfast in Washington DC this morning, Griffin said the while the proposal to use the shuttles from 2011-2015 at a total cost of $15 billion “deserves consideration”, as an engineer and program manager, he would have “better uses” for the money. Griffin says slightly more than $3 billion would accelerate the first Ares 1 missions by one year to 2014.

“It can be done. Whether it ought to be done is another question,” he said of the shuttle extension, noting that even if the orbiter were to remain flying during the gap, the US would continue to have to rely on Russia for critical services to the station including providing a rescue module to return the crew to Earth. 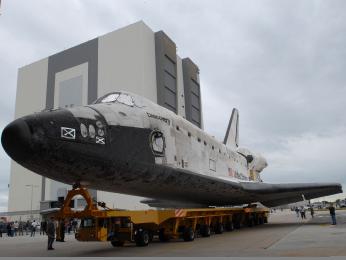 The larger issue for the US may not be one that can be determined by a formula – world opinion of a country that builds but can’t support an international space station. From that aspect, Griffin says preserving the US’s position as the predominant power in space by eliminating the gap may be worth the cost and risk, so long as the money does not come from NASA’s existing budget. “Postponing the gap is not (acceptable),” he says.

Griffin, a Bush appointee, has resigned his job effective 20 January, though some supporters remain hopeful that President-elect Obama will keep him onboard.