French investigators believe the crew of an Air France Boeing 777-200ER misinterpreted weather radar information while trying to avoid thunderstorms, losing awareness of the jet’s position before it strayed into close proximity with an African volcanic peak.

It was operating in darkness from Malabo, in Equatorial Guinea, to Douala in Cameroon on 2 May 2015. The 40min flight is operated mainly over water at an altitude of 9,000ft and the eastbound flightplan involved flying south of the 13,200ft peak of Mount Cameroon.

But French investigation authority BEA says the crew, after turning right after take-off from Malabo’s runway 22, deviated “significantly” to the north of the planned route in order to avoid storms.

Both the captain’s and the first officer’s navigation displays were showing weather radar data. The first officer, who was flying, saw a large red echo in front of the aircraft and a second red echo to the right which appeared to be tracking alongside the aircraft.

BEA says that, although the radar filters echoes reflected from the ground, they can appear similar to storm echoes on the display.

The first officer did not understand the nature of the second echo and briefly switched his display to ‘terrain’ mode to check, before reverting to ‘weather’ mode about 6s later.

But BEA says that the ‘terrain’ mode needs a longer period, about 8s, to fully construct the picture.

Terrain map showing the 777’s course around the volcano, the red area indicating the ground-proximity alarm

At the end of the check, the first officer believed the echo in front of the aircraft corresponded to a ground reflection of Mount Cameroon, and that the red echo to the right was a false image.

BEA says the captain, who was handling busy air traffic control communications, suggested that the first officer turn to the right in preparation for the Douala arrival, believing the aircraft was positioned south-west of the mountain, when it was actually north-west, putting the peak to the right of the 777’s course.

The first officer selected a south-east heading of 120°, which turned the twinjet towards the north-eastern flanks of the mountain.

About 30s after entering the turn the aircraft’s radio height reduced to 5,000ft and triggered a ground-proximity warning. Both pilots’ navigation displays automatically switched to ‘terrain’ mode.

The first officer increased the selected heading to 134° and the 777 banked to 25°, its radio height declining further to 4,150ft and activating a ‘pull up’ order from the warning system.

Three pilots were in the cockpit. BEA says the first officer and a cabin crew member – who was also in the cockpit, on a jump-seat – were able to “distinguish trees” on the right side of the aircraft.

The first officer disengaged the autopilot, advanced the thrust levers to maximum and pitched the aircraft nose-up, although the jet remained in the turn and the third pilot, a relief first officer, remarked that the wings should be levelled. 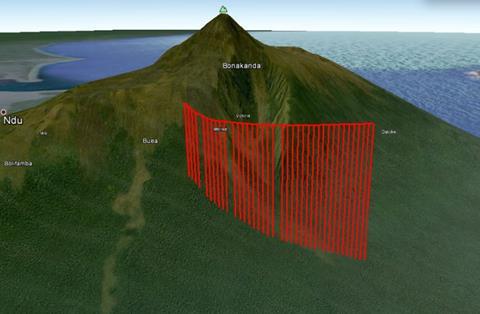 Reconstruction of the flightpath during the ground-proximity warning

After the ground-proximity alarm stopped, the climb was briefly halted before the turn was resumed with a selected heading of 150° and a selected altitude of 12,000ft.

Concerned over the possibility of traffic conflict, the captain instructed the first officer to stop the climb as the 777 approached 11,000ft but the aircraft continued to climb – its radio height reached a minimum of 2,100ft as the jet passed 11,500ft.

It continued to climb to 13,000ft, although this was still below the summit elevation of Mount Cameroon.

“Avoidance of thunderstorm masses led the crew to depart significantly from the route planned,” says BEA. “Although the proximity of Mount Cameroon was mentioned during the [crew] briefing, the risk of a dangerous encounter with this terrain had not been identified.”

The aircraft (F-GSPG) subsequently landed safely at Douala. None of the 23 passengers or 14 crew members on the lightly-loaded flight was injured.

BEA says the inquiry was conducted without the benefit of the cockpit-voice recorder, which was not preserved after the incident, and relied on the flight-data recorder and crew testimonies.