Investigators are attempting to understand the reason behind unresponsive ailerons on De Havilland Canada Dash 8-400 turboprops, an anomaly discovered during a separate probe into an aileron cable break on a Flybe aircraft.

The cable break, involving the left-hand aileron, occurred on Flybe’s G-FLBE during a service from Newquay to London Heathrow last November.

But analysis of the incident, says the UK Air Accidents Investigation Branch, identified an “unrelated” issue in which the right-hand aileron was revealed to have stopped responding to the control wheel shortly after the aircraft levelled at 20,000ft.

This lack of response lasted about 5min, with the aileron almost fixed at 5° upwards, returning suddenly to normal as the aircraft started descending towards Exeter – a diversion prompted by the handling issue resulting from the broken cable on the other aileron. 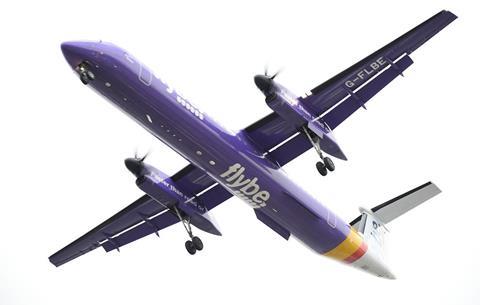 While inquiries ultimately traced the cable break to a combination of internal and external wear, the unresponsiveness of the right-hand aileron remained unexplained.

Flybe had initiated work to understand the cause of the anomaly but the airline collapsed and ceased operations before it could reach conclusions.

“Consequently, the cause was not identified,” says the Air Accidents Investigation Branch.

Analysis of flight-data recorder information from G-FLBE revealed that the right aileron had stopped responding to the control wheel position during 14 of the previous 23 flights.

The duration of these interruptions varied from 2min to 35min. For the three flights immediately prior to that involving the cable break, the intervals were 25min, 35min and 26min.

While the occurrences typically took place in cruise, or as the aircraft approached top of climb, one incident happened during descent from 10,000ft to 6,000ft.

“Movement of the aileron always returned to normal prior to the aircraft starting the final approach,” the inquiry says.

Flybe expanded its analysis to other Dash 8-400s in its fleet to determine whether any was similarly affected.

Thirty-two flights from 16 aircraft were initially examined and, during half of these, the right aileron was unresponsive for periods during the flight.

Flybe subsequently broadened these checks to 51 aircraft, covering seven days’ flying in February this year, looking for instances in which the right aileron had not responded to control-wheel movement for more than 60s.

The airline found that 36 of the 51 aircraft had unresponsive ailerons, and 12 of these affected aircraft had an occurrence rate of 25% or more.

For the aircraft which had suffered the cable break, G-FLBE, a total of 21 events had occurred in 33 flights – the highest ratio uncovered. But Flybe’s collapse, at the beginning of March 2020, halted the airline’s efforts to examine this aircraft and isolate the cause.

The aircraft type had formerly been produced by Bombardier, as the Q400, but the line was taken over by Longview Aviation Capital in mid-2019 with De Havilland Aircraft as the manufacturer.

Modelling of the flight data from one of the aircraft’s flights – before its left aileron cable broke – showed that the left aileron had continued to operate normally when the right aileron was unresponsive.

The inquiry says the problem remained after G-FLBE had its cables replaced and correctly tensioned, suggesting the right aileron’s lack of response was “likely” to have been caused by a restriction.

Operators of Dash 8-400s are being advised to check for unresponsive ailerons through flight-data monitoring programmes. But although the manufacturer has initiated such action, the cause and possible remedies have yet to be identified.

“It is important that accident investigators and operators fully understand why the aileron becomes unresponsive, its effect on aircraft performance and what rectification action is required,” says the inquiry, which has recommended that De Havilland Aircraft be required to determine the reasons for the occurrences.