There is a premium revolution underway at the US network carriers. Business class seats are becoming more spacious and private, and premium economy cabins - long the missing onboard segment - are becoming standard with widebody fleets due for outfitting in the next two years.

But where American Airlines, Delta Air Lines and United Airlines break is on how many of each premium seat to offer - critical calculations that are part of their larger revenue and margin-boosting segmentation initiatives.

"The focus on premium passengers is aligned with a focus on higher margins for legacy carriers," Evercore analyst Duane Pfennigwerth said on investments in February.

Business class products have been de rigeur since the 1990s, with American ushering in the latest generation of seats in 2013. The Fort Worth, Texas-based carrier followed that with the first premium economy cabin at a US carrier in 2016.

While each carrier has at one point taken the premium-product reins, United recently moved the ball forward with its announcement of expanded premium cabins on a range of aircraft. Investments include a new subfleet of 21 Boeing 767-300ERs with expanded business class cabins to operating new Boeing 787-10s with 65 premium seats – 44 in business and 21 in premium economy – on prominent domestic and international routes.

With their various layouts, what guides American, Delta and United's decision making in search of that premium-seat sweet spots?

"We feel quite confident about the different configurations we have to serve a diverse global network," American senior vice-president of marketing, loyalty and sales Kurt Stache tells FlightGlobal on its widebody premium seating configurations.

While the Fort Worth, Texas-based carrier is quick to tout the fact that it is the only US airline still offering a first-class cabin – an eight-seat affair on its Boeing 777-300ERs – it also has some of the smallest business class cabins versus its peers. Both its 787-8s or -9s have fewer business class seats than comparably sized aircraft at either Delta or United.

"Yes, United is adding more premium seats, but we certainly have the flexibility to move aircraft around to meet demand," says Stache on the 787 configurations. He emphasises that, where demand warrants, American flies aircraft with larger premium cabins, like its highest premium-seat count aircraft on the 777-300ER to London. 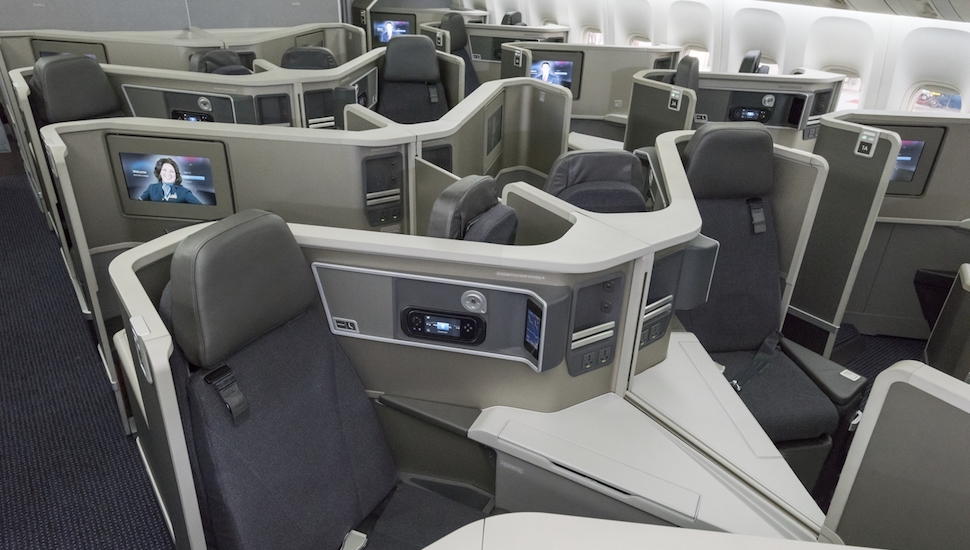 The largest share of 777-300ER departures at American, nearly a quarter, are from London Heathrow, Cirium schedules data for June shows.

In addition, the airline has a metal neutral joint venture with British Airways that allows the carriers to optimise premium seats across the Atlantic, including with BA's fleet of premium Boeing 747-400s with 130 first, business and premium economy seats.

Premium economy is a lucrative offering for American. The cabin commands nearly twice the fare of economy seats, says Stache, who adds that the airline can easily add another row or two of the product if demand warrants whereas business class seats are a more intensive investment.

"With the exception of the 767s and the A330-300s, we're done," he says on the premium economy roll out. "Demand has been good, the price point has been where we thought it would be."

Atlanta-based Delta slots itself somewhere between American and United when it comes to premium configurations. Its A350-900s, which it ordered instead of 787-9s in a 2014 campaign, have fewer business class seats than the comparable 787s at United but a large premium economy cabin.

"Having all five cabins available, I think we feel very comfortable in the size of each one of those," said Glen Hauenstein, president of Atlanta-based Delta, responding to a question on its premium cabin density during a quarterly earnings call on 10 April.

The "five cabins" he refers to are business class, premium economy, extra-legroom economy, economy and basic economy. However, the latter two are the same seat just different fare classes. 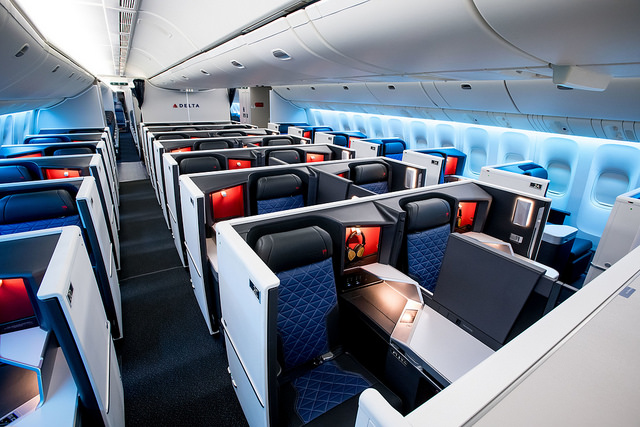 Delta business class suites on the 777

Delta focuses on a more exclusive business class product, being the only US carrier to offer suites with closable doors, and more premium economy seats. For example, it has 48 seats of the latter on its Boeing 777-200s while American and United both only have 24 seats.

Hauenstein touts this large premium economy cabin when asked why Delta shrank the size of its business class on the 777, saying: "We're introducing an entirely new cabin on the airplanes. We're trying to best match the consumer demand with the products and services we have."

Premium density, including both business and premium economy, more than doubled to 76 seats from just 37 seats when the carrier began reconfiguring its 777-200s last year.

Delta has said that premium economy seats command roughly 1.7x economy fares. It plans to finish installing the cabin on aircraft in 2021.

The carrier is also the only of the three to disclose premium-related passenger revenue, which amounted to $3.27 billion, or 35% of total passenger revenues, in the first quarter. Premium revenues grew 8% year-over-year.

"We're putting more premium seats on the 787 than either American or Delta, because we have real premium demand in those markets," Kirby told employees at United's San Francisco hub at the end of March. He was referring to the Chicago-based carrier's Newark, San Francisco and Washington Dulles hubs, which he calls the "three of the biggest premium demand markets in the world".

New York, Los Angeles, Miami, San Francisco and Chicago were the five largest international gateways in the USA during the year ending in September 2018, the latest available, US Department of Transportation data shows. The agency does not report international air fare data. 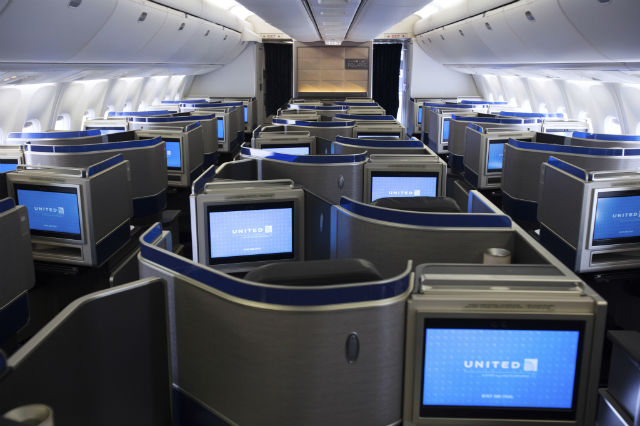 United's business class cabin on the 767

While United configures both its 787-8s and -9s with more business class seats than either those at American or the A350 at Delta, it has yet to disclose plans to reconfigure either aircraft with its premium economy product. It aims to complete installations of the new cabin on widebody aircraft by end-2020.

The 777-200 is the one type where all three airlines offer their full suite of products. United configures its aircraft with two-fewer premium seats – 74 versus 76 – than Delta, but up to 22 more business class seats than either competitor.

"Our international network has much higher margins than [Delta and American]," says Kirby, noting that the carrier sees a high percentage of passengers paying to sit in business class at its three coastal gateway hubs. "That's the secret sauce for United."