Project Sunrise could see 19-plus hour flights from New York and London to Sydney – if the aircraft, passengers and crew can take the strain

Is the next big idea in air transport going to be ultra-long-haul routes that test the endurance limits of aircraft, crew and passengers? To link London or New York with Sydney or Melbourne via nonstop flights – journeys that used to involve a string of refuelling stops and today require at least one touchdown – is technically possible thanks to modern fuel efficiency. But a basket of challenges still stand in the way of making such epic journeys either economically viable or marketable – even to passengers determined to traverse the globe as quickly as possible yet still willing to endure a 20h flight. 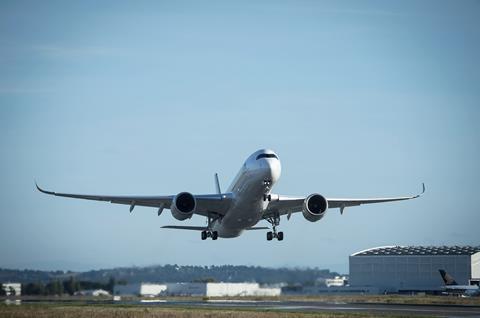 Qantas will at some point have to make a go or no-go decision on its so-called Project Sunrise plan to do just that – because it has placed tentative orders with Airbus an order for up to a dozen A350-1000s that it would use for its planned ultra-long-haul services. A 31 March deadline to confirm the orders has been extended so both parties can cope with the coronavirus crisis. How that delay will impact plans remains to be seen, but Qantas has envisioned beginning flights to the Australian east coast from New York and London in 2022-2023 under a project whose name reflects the Catalina flying boat “double sunrise” services of the 1940s between Perth and Ceylon – now Sri Lanka – during which the break of dawn could be viewed twice during the same long flight.

Qantas has some experience of operating at the limits. In March 2018 it initiated a Perth-London nonstop service on Boeing 787-9s. That flight, taking a little longer than 17h, is currently the world’s third-longest scheduled flight and could be the precursor to journeys taking between 19h and 20h, to the Australian west coast.

Some of the challenges of turning what is technically possible into a viable commercial operation were illustrated by Qantas’s three research flights – two New York-Sydney and one London-Sydney flights – all flown between October and December 2019 with Boeing 787-9s, on delivery flights from the factory. Reflecting the inherent trade-off between range and payload, the 787s carried no more than 50 passengers on board each flight, and no cargo.

Under more normal operations, the 787-9s would feature a cabin configuration of 236 seats. The business-class section has 42 Thompson seats, arranged 1-2-1 abreast, giving passengers direct aisle access. There are 28 premium economy-class seats with 38in pitch and 22.8in (58cm) width to provide more legroom and space for passengers. Economy class, meanwhile, has166 seats.

The first of the 787-9 research flights was flown by GE Aviation GEnx-powered VH-ZNI, from New York JFK; it arrived in Sydney after 19h 16min in the air, carrying four pilots along with, as passengers, the two who had delivered the aircraft from Boeing to JFK. At take-off it carried the maximum 101t fuel load and arrived with what the carrier described as a “comfortable” 70min remaining, thought to be about 6t. The other two flights took 19h 19min and 19h 31 mins.

Qantas also equipped the aircraft to gather data that it needs to win regulatory approval. That included monitoring pilots’ brain waves, melatonin levels and alertness. As chief executive Alan Joyce said in October, a current crew limit of 20h needs to be extended to 22h or even 24h, and Qantas needed to make regulators comfortable that such extended operations could be done in safety. Joyce at the time also made clear that Qantas was aware that to manage such long flights passengers would need a different cabin configuration than normal – including, for example, some space to exercise.

By the year-end, Qantas had chosen the A350-1000 over Boeing’s in-development 777X for Project Sunrise. But the Australian carrier is not alone in testing the water of ultra-long haul flights, and across the Tasman Sea, another carrier is also making headway – and is possibly more advanced than Qantas when it comes to passenger comfort. Indeed, in the near future, economy class passengers on Air New Zealand could lie down to rest in sleeping pods.

The carrier recently filed patent and trademark applications for the full-length pods, known as Economy SkyNest, as it considers installing them on its ultra-long-haul routes in the future. The product will feature six lie-flat sleeping pods, each about 2m (6ft) in length. Air New Zealand has not decided on the beds’ exact position in the cabin yet.

Much attention is shifting to interiors and how airlines, particularly Asia-Pacific carriers which operate the bulk of these ultra-long-haul flights, might straddle the need for comfort and the need to break even. Air New Zealand, while it has caught the travelling public’s attention with Economy SkyNest, has been coy about whether or not the product will feature on its upcoming ultra-long haul flights such as an Auckland-New York nonstop service, which it is looking to launch later this year with 787-9s. The flights will stretch to the region of about 17h, and the carrier says it will assess their performance before deciding whether or not to install sleep pods.

Qantas, meanwhile, has not said much about cabin interiors on its ultra-long-haul variant of Airbus’s A350-1000s. However, in a presentation accompanying the release of its full-year results for fiscal year 2019, the carrier states it has already come up with a cabin configuration, should Project Sunrise go ahead. While it did not provide further details, Qantas has been reported to be thinking of an entirely different cabin product for the Project Sunrise flights, should they go ahead. 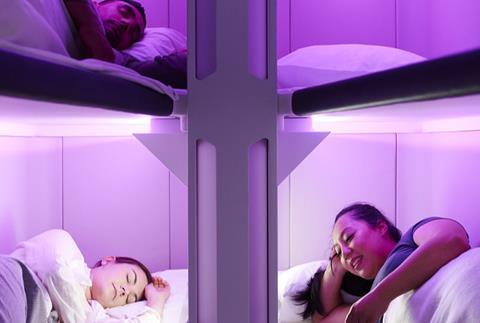 As Project Sunrise gained traction with the launch of its research flights, online chatter too, grew with ideas for the aircraft interior. Some include having creches, exercise corners, as well as rest areas.

When it announced the launch of the research flights, Qantas gave some indication of what it was seeking in a cabin interior. “Customer feedback on food choices, separate stretching and wellbeing zones and entertainment options will also be tested,” it says.

James Mellon, interiors and passenger experience analyst at Cirium aviation research, argues that Project Sunrise flights will be “considered a premium service”, given that they are point to point, as opposed to other indirect services between Australia and Europe, as well as the east coast of the USA. “Qantas will be able to command a premium price in all cabins,” Mellon says, which means that the configuration on the A350s would need to be premium-heavy.

He foresees Qantas having a significant number of seats in business and premium economy classes, with the remaining space for economy class. On the inclusion of a communal space for passengers that would be essential on such long flights, Mellon tells FlightGlobal that Qantas will “[need] to attract passengers towards spending time in that space”.

“I’m not expecting anything radical from Qantas, but the inclusion of a communal area such as this is a likely feature. However, it will take up crucial cabin space that could be filled with seats,” he notes.

While Project Sunrise will set new records in terms of flight lengths – and possibly aircraft interiors – it will not be the first time aircraft have been adapted to suit lengthy distances.

The current record for longest nonstop flight is set by Singapore Airlines (SIA) for flights between Singapore and Newark. The carrier relaunched the route in 2018 with A350-900s, having previously operated them in the early 2000s. A subfleet of A350-900s has been configured with a premium-heavy cabin layout.

There are 67 seats in business class, arranged in a 1-2-1 configuration, and supplied by Japan’s Jamco. The premium economy cabin has 94 seats laid out 2-4-2. The subfleet also operates the Singapore-Los Angeles nonstop.

Ultimately, SIA suspended these nonstop flights in 2013, citing the lack of economic sustainability. However, it relaunched them five years later, with the A350s, which are said to consume 25% less fuel than their four-engined predecessors.

It is this introduction of more fuel-efficient aircraft technology that is the biggest difference in the ultra-long-haul operations of then and now, says independent aviation analyst Brendan Sobie.

“[Most] potential ultra-long-haul routes are still not viable as they don’t have sufficient high-end demand and enough passengers willing to pay a premium for the convenience of a nonstop option. Singapore-New York and Sydney-New York/London are exceptional in that they have the right passenger mix and demand.”

Sobie adds: “Then it becomes the airline’s job to make sure they have the product to successfully leverage this demand.”

Sobie also disagrees with the idea that such routes’ profitability is tied to “where you draw the line on comfort”.

“These are not normal routes where airlines have the option of packing in more passengers to maximise revenues. You simply can’t do that given the weight issues and operating challenges of these routes. You need to use the space differently anyway and therefore it’s about how to best monetise the fact you have more space per passenger than normal,” he says.

Ultimately, he says, it is about getting the “right passenger mix”, coupled with demand: “If you have a rare route with the right passenger mix and demand then you also have to get the product right in order to ensure you can command the revenue premium that is required to overcome the high costs of ultra-long-haul operations.”

Passenger endurance and aircraft range, of course, are not the only obstacles to sustainable ultra-long-haul operations. Crews, needless to say, are critical – and Qantas has been struggling to get its pilots on side. While Qantas is understood to see Project Sunrise as a necessary ingredient for protecting its competitive position, a dispute over ultra-long-haul pay and conditions has management struggling to reach agreement with the Australian and International Pilots Association (AIPA).

The carrier has said it will if necessary negotiate directly with individual pilots or even create a “new employment entity” to bypass AIPA by creating a lower-cost group of about 400 flyers from other airlines and overseas.