As Avianca and Gol continue to work towards the creation of a new airline holding company in the region, the latest data shows why the tie-up is attracting so much interest and scrutiny.

The combination of the two airlines – alongside Viva’s Colombia and Peru operations, and an interest in Chile’s Sky Airlines – in the Abra Group would create a business that would rival LATAM Airlines Group in terms of scale.

That would mark a significant shift in the balance of power in a region where LATAM has been by far the largest airline group, exceeding the capacity data for other operators by some distance. 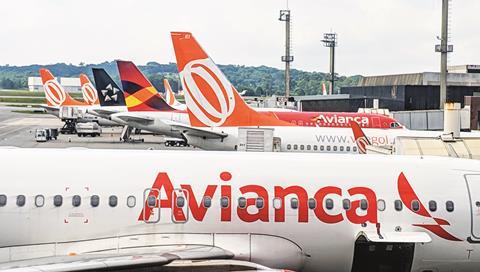 Indeed, when it comes to flight numbers, seats offered and available seat kilometres (ASKs), Cirium schedules data shows LATAM’s group output is at least double that of every other group or airline in the region for October 2022 – with the exception of one airline on one data point. That is for flights offered by Azul, which at around 27,000, are more than half 40,000 offered by LATAM. Gol is the third-busiest in terms of flights, at nearly 19,000, followed by Aeromexico at 17,000.

When the proposed Abra Group carriers are joined together, however, the balance changes significantly.

Cirium data for October shows the proposed Abra Group carriers are today offering around 7.6 million seats, compared with the 7.3 million by LATAM.

In terms of fleet size, the proposed Abra Group would be slightly ahead of LATAM Airlines Group, Cirium data suggests, with both operating more than 300 aircraft. The latter, however, has a much larger roster of twin-aisle jets.

Abra would have around 22 widebody jets, including 13 Boeing 787-8s, six Airbus A330-200 freighters and three passenger versions of the same aircraft.

LATAM Airlines Group has a much longer list of widebody aircraft in its fleet.

The rest of LATAM’s fleet is made up of A320-family jets.

As things stand, Abra would have a much larger orderbook than LATAM, featuring more than 230 aircraft, Cirium data suggests, split between A320neo and 737 Max types.

Data shows some 68 aircraft in LATAM’s orderbook – nearly all of them A320neo-family jets.

Ultimately, the data shows that should the European-style holding company structure take off in the region, a new power dynamic will quickly emerge.

And that is before partnerships with carriers outside the region are considered. On that point, the recent clearance by US authorities of LATAM’s joint venture with Delta Air Lines is a significant milestone.

For the carriers left outside the groupings, however, there is not necessarily anything to fear.

“Consolidation in most cases tends to be a positive thing for all airlines, not just for the consolidating airlines,” said Copa Airlines chief executive Pedro Heilbron, soon after the proposal to set up Abra Group was announced.