Air France-KLM Group airlines are adding a sustainable aviation fuel (SAF) levy to ticket sales as they seek to increase its use – voluntarily in the case of KLM and mandated by the government when it comes to the business’s French operations.

The decision may presage a trend within the region and beyond, with the European Union working on proposals for at least 2% of aviation fuel on flights within and from the bloc to be sustainable by 2025, and the entire global industry under increasing scrutiny regarding its environmental footprint.

And the Franco-Dutch group is arguably a bellwether for action on sustainability, given the French government’s recent willingness to legislate on the issue and KLM’s historically proactive approach to the topic. 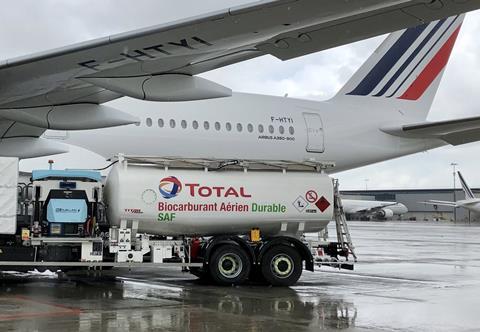 In May 2021, Air France-KLM, Total, Groupe ADP and Airbus joined forces for the first long-haul flight fueled by SAF produced in France

Indeed, the levies announced on 11 January follow that French government’s decision to mandate SAF use at 1% on France-originating flights from 1 January 2022, rising to 2% in 2025 and 5% 2030. In the Netherlands, KLM’s move to ensure 0.5% of its fuel is sustainable on flights from Amsterdam is a voluntary one, with the carrier saying it is “committed to bringing about an energy transition”.

As a result, Air France, KLM, and Transavia will include an SAF surcharge in ticket prices for all flights that depart from, or transit in, France and the Netherlands, the group says. The surcharge varies from €1 ($1.13) to €12 per ticket, depending on the distance flown and the seat class.

Proceeds from the levy will be used to fund the increased use of SAF in the fuel mix, the group states, while noting passengers will also have the option to boost the amount of SAF they fund by voluntarily paying a higher charge. Such an option may be particularly attractive to corporate travel buyers with their own sustainability targets to meet.

“Today, SAF production worldwide covers only around 0.1% of the total fuel usage of the aviation industry,” says Fahmi Mahjoub, general manager for Air France-KLM in the UK and Ireland. “We need to speed up the production. And that’s why we are now gradually incorporating SAF in our flights departing from France and the Netherlands as of January 2022.”

KLM separately says it is “committed to bringing about an energy transition”, citing its strong performance in the use of SAF in relative terms and its ambition to achieve a worldwide SAF proportion of 10% in 2030 as a part of the Clean Skies for Tomorrow coalition.

“We realise that the 0.5% standard admixture on passenger tickets is a very small step, but an important one in the right direction and we hope other airlines will follow soon.” KLM states. “We will have to work with all parties around us and come up with rock-solid solutions and innovations to further open the market for SAF.”

Air France-KLM’s group decarbonisation strategy is to accelerate SAF incorporation as production increases, with a target of 5% of total fuel use in 2030 and up to 63% in 2050.

That is largely in line with global industry association IATA’s net-zero 2050 roadmap, announced at its AGM last year, where the ’base-case scenario’ sees SAF use at 2% by 2025, rising through various milestones to reach 65% by 2050.

The industry has recognised many hurdles in meeting that challenge, including SAF’s current high cost, the need to quickly introduce industrial-scale production – which also requires the energy majors to step up – and infrastructure constraints when it comes to actually delivering the fuel to aircraft.

But Willie Walsh, IATA director general, has previously insisted that aviation has a “history of realising what was thought to be impossible – and doing so quickly”.