This week’s Airlines 2021 event in London – which took place before news emerged regarding a concerning variant of Covid-19 identified in South Africa – was a timely gathering of key players in the UK aviation sector, as they called for the country’s government to remove barriers to air travel that put it out of step with mainland Europe.

Data released by Eurocontrol later in the week showed why airlines are so frustrated, with both British Airways and EasyJet significantly lagging the recovery in flight numbers seen among their European peers.

Speaking in London, EasyJet chief commercial officer Sophie Dekkers described the UK government’s current Covid-19 testing policies as a “real shame” that weigh on demand. She compared the UK to Europe – where vaccinated travellers can travel without testing – noting the “much stronger” recovery in the latter.

Wizz Air UK managing director Marion Geoffroy added of day-two Covid-19 testing for arrivals: “The whole point in vaccination was to avoid this.”

Virgin Atlantic chief executive Shai Weiss also called on the government to reconsider its testing requirement, describing it as “an inhibitor of travel”.

Aside from concerns about testing, Pieter Elbers, the chief executive of Dutch airline KLM – which feeds its Schiphol hub from a number of UK regional airports – joked that his assistant “almost asked for a pay rise” having completed his lengthy UK passenger locator form.

UK aviation minister Robert Courts promised that the government would review its travel restrictions in January.

Another notable theme of Airlines 2021 was how sustainability has become an unavoidable topic in all discussions regarding the future of the industry.

IAG’s group head of sustainability Jonathon Counsell cited the “general acceptance that we will solve climate change with public-private partnerships” as a crucial shift in attitudes at the recent COP26 gathering.

Some speakers said they were encouraged by how much the debate on SAF has moved on in recent months, with Elbers welcoming the fact that “momentum is picking up” among governments – including the UK’s.

On that journey, Weiss was keen to stress that oil majors in particular need to do more.

Finally, it wouldn’t have been a gathering of UK aviation stakeholders without the topic of Heathrow airport charges behind raised. Making the opening address to Airlines 2021, the chief executive of BA and Iberia parent IAG, Luis Gallego, exposed the schism between airlines and the airport on the issue, saying the group would even reconsider its use of the hub if charges were to rise too steeply. 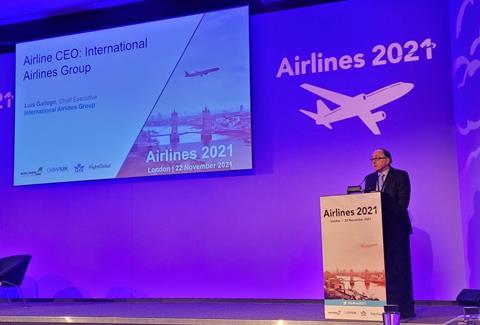 Gallego warned Heathrow regarding planned hikes in its charges