Two years on from Alitalia's filing for administration, the fate of the Italian flag carrier still hangs in the balance.

The drawn-out privatisation process that has been running since May 2017 has offered more clarity on who is not interested in investing than on who is.

By October 2017, the Italian government had, it said, received seven expressions of interest. Ryanair – after showing early interest in the stricken Italian carrier – had already ruled itself out, but both EasyJet and Lufthansa were participating in the process. Air France-KLM and Delta Air Lines would later emerge as interested parties. Wizz Air was also named as another tentative candidate.

By late 2018, Ferrovie dello Stato Italiane had become a linchpin of the process and by February 2019 the state-owned railway company had opened talks with Cerberus Capital Management, Delta and EasyJet, with a view to creating a consortium that would run the SkyTeam carrier.

In parallel, the participation of Air France-KLM and Lufthansa appeared to wane. In February, there were reports that the Franco-Dutch airline group was pulling out of the process. Lufthansa was similarly said to have pulled back, possibly after the Italian government balked at the level of cuts at, and involvement in, a restructured Alitalia that the Star Alliance group was demanding.

Neither airline group formally renounced their interest in the flag carrier, and they hinted that they would continue to monitor the situation.

Talks between Ferrovie and its potential consortium partners continued but were hit in March by the announcement that EasyJet was formally leaving the process.

The prospects for the Italian airline appear to have narrowed just as the stakes are rising. The deadline for firm bids formally ended on 30 April, and media reports suggest that Ferrovie has requested an extension, which is currently being considered by the Italian government.

Reuters has reported that the railway group and Delta are ready to contribute to a bid worth around €1 billion ($1.1 billion), but this would still leave a shortfall of around €400 million. The Italian government, it has been mooted, could take a share in the carrier by swapping debt for shares.

While efforts to build a rescue package for the Italian carrier continue, another issue that remains unresolved is the €900 million loan provided by the Italian government to the carrier shortly after it entered administration.

The European Commission opened an investigation into the loan in April 2018 to decide whether it constituted illegal state aid. Its ultimate decision could have major repercussions for the airline's very survival.

Fleet, seats and passenger data suggests that Alitalia has remained in a state of semi-stasis over the past two years, and by virtue of this has lost some ground to competitors.

Cirium schedules data shows that the airline's seat capacity has grown slightly over the period. In May 2017, total seat capacity stood at 28.8 million; it is now 29.6 million.

Since 2017, Alitalia has shed routes from Milan to Buenos Aires. Routes from Milan and Rome to Abu Dhabi, the home of Alitalia's former shareholder, Etihad, have also been scrapped.

For the most part, however, Alitalia's long-haul network is largely unchanged. In the transatlantic market, the carrier has continued to offer services to Boston, Chicago, Los Angeles, New York and Toronto from Rome, while from Milan Malpensa it has continued to serve New York. This month, the SkyTeam carrier started services to Washington.

Services to Seoul and Tokyo have continued unabated. Flights to Beijing have been suspended, but Delhi has been restored as an Alitalia destination after a nine-year gap.

In 2018, Alitalia resumed services to South Africa after a 16-year absence, with the start of services to Johannesburg.

While the long-haul network remains roughly intact, Alitalia has been forced to grapple with new competitors on some trunk routes. Luckily for the Italian carrier, these rivals have experienced their own problems.

Alitalia is now challenged at Rome by budget carrier Norwegian, which is offering flights to Fort Lauderdale, Los Angeles and New York.

From Milan Malpensa, Air Italy – bolstered by minority shareholder Qatar Airways – has ambitions to take a greater share of Italy's long-haul business. This summer the carrier is operating from Malpensa to Los Angeles, New York and San Francisco.

However, the competition Alitalia faces has remained relatively unchanged, with the Italian flag carrier mainly facing the likes of American Airlines, Delta and United Airlines. Cirium data shows that Alitalia is the second-largest airline operating between the USA and Italy, after American. 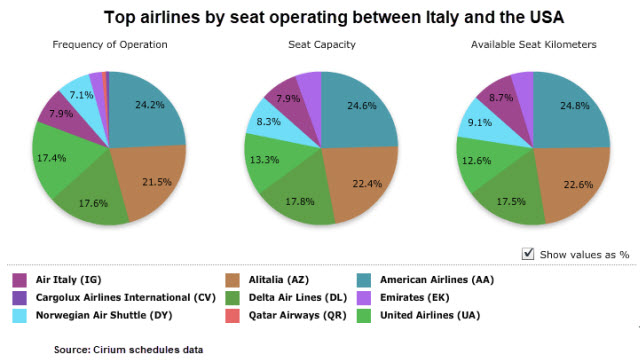 Cirium's Fleets Analyzer shows that the Alitalia fleet is declining in size, from 101 aircraft in 2017 to a projected 83 by the end of this year.

Alitalia's passenger numbers actually grew by 1% in 2018. This is an improvement on the previous year, when the SkyTeam carrier lost 5.8%, representing approximately 1.5 million passengers.

It remains the third-largest international operator in Italy, after Ryanair and EasyJet.

The airline is still Italy's largest domestic airline, having carried almost 12.2 million such passengers in 2018, but it was only just ahead of Ryanair, which carried 11.1 million. This is little different from the domestic market positions in 2017.

Perhaps the biggest blow from a commercial point of view over the two years since the airline went into administration has been Alitalia's forced exit from the joint ventures it was previously in with Air France, Delta Air Lines and KLM.

The airline exited its European joint venture with Air France-KLM in 2017 and has since 2018 been excluded – at least until the result of its restructuring becomes clear – from the partners' transatlantic tie-up since 2018, supplanted by Virgin Atlantic.

While the Italian carrier can still leverage on the benefits of its membership of the SkyTeam alliance, it is likely that the loss of revenues from the tie-up with Delta and Air France-KLM will be keenly felt, given that the transatlantic market is a critically important one.

The continued presence of Delta in talks to buy a stake in Alitalia might give the Italian airline's management some optimism that the relationship can be resurrected once the sale process is complete.

Assuming that Ferrovie is able to pull together a consortium that successfully takes over Alitalia, what are the prospects for it to become profitable? Peter Morris, chief economist at Ascend by Cirium, is gloomy about the Italian carrier's prospects of a successful restructure.

"After two decades of one form or another of the same kind of problems, it's inevitably difficult to be optimistic that this time it's going to be different," he says.

"The first problem is that the European market, on both the demand and supply side, has moved on dramatically over the last 20 years – in particular with the rise of the two big EU low-cost operators to become the biggest in Europe and with EasyJet and Ryanair taking a significant chunk out of what was once Alitalia's core international and domestic markets (and indeed expanding these significantly). It is difficult for Alitalia to claim to customers or politicians it has something special to offer in terms of service or product that the other airlines are not offering," Morris argues.

He adds that as "nothing substantial" has come from talks with Air France, KLM and Lufthansa to date, a marketing and business relationship with a big European alliance player appears "essential" to ensure the effective survival of a smaller national airline. Examples of this dynamic he sees in the survival of carriers such as Aer Lingus, Austrian Airlines, Brussels Airlines and Swiss.

Italy remains one of the biggest European national markets for both business and leisure travel, providing the potential for Alitalia to be "financially viable", says Morris. "The question is whether a revamped Alitalia business model is able to be financially viable on the kinds of routes, services and prices that this market will support."

Ultimately, Morris believes, one of the biggest challenges may be that making the cuts needed at Alitalia could also reduce the opportunity for the Italian airline to garner economies of scale required for successful growth. It "will be going in the opposite direction from the low-cost competitors who can cut their fares further and still make profits", he warns.