American Airlines bustling Dallas/Fort Worth base is about to get a whole lot busier.

The hometown carrier, which has operated a hub at the airport for nearly four decades, will operate a record number of flights – more than 900 on peak days, prompting the nickname “DFW 900” – from DFW this summer, part of a larger growth strategy focused on its most-profitable facilities.

Additional flights from Charlotte and Washington National, its other two most profitable hubs, are planned in the coming years.

“Our planned growth in DFW… marks our first opportunity for sizable growth at one of our most profitable hubs since the merger,” said Robert Isom, president of American, in January.

To put that in context, the growth at DFW represents two-thirds of American’s entire planned systemwide growth of 3% for 2019. That’s equivalent to adding its entire Boston schedule at one airport in the matter of just four months.

“[DFW 900] positions us to have more meaningful and profitable growth,” said Cedric Rockamore, vice-president of DFW hub operations at American, in a podcast on 3 April. The move benefits customers by offering more destinations, and employees and investors through increased profitable flying, he added.

Flights out of DFW produce average margins roughly twice the system average, and are expected to contribute significantly to the airline’s $1 billion incremental revenue target in 2019, American executives have said this year.

“It’s really easy growth,” says Helane Becker, an analyst at Cowen. American is building on their already massive DFW operation, where they have economies of scale, to create a hub operation second only in size to Delta Air Lines’ Atlanta hub.

The majority of the new DFW flights will be flown with regional aircraft, which tend to generate higher unit revenues than other additions, Cowen noted in a January report. The expansion, the report notes, is “a clear margin opportunity for American”.

That focus on additional regional flying may turn out to be a silver lining for American. The carrier is one of three US operators of the now-grounded Boeing 737 Max - it flew 24 737 Max 8s when the type was suspended in March. Some analysts expect the aircraft will remain grounded through the third quarter. American has removed the Max from its schedules until 5 June.

Many of American’s new DFW flights are frequency additions on existing routes, but the airline will add 23 new routes from the airport by the third quarter that it did not fly last year, schedules show. These include long-haul additions like Dublin and Munich, as well as numerous regional-aircraft routes to places like Augusta, Bakersfield and Del Rio. 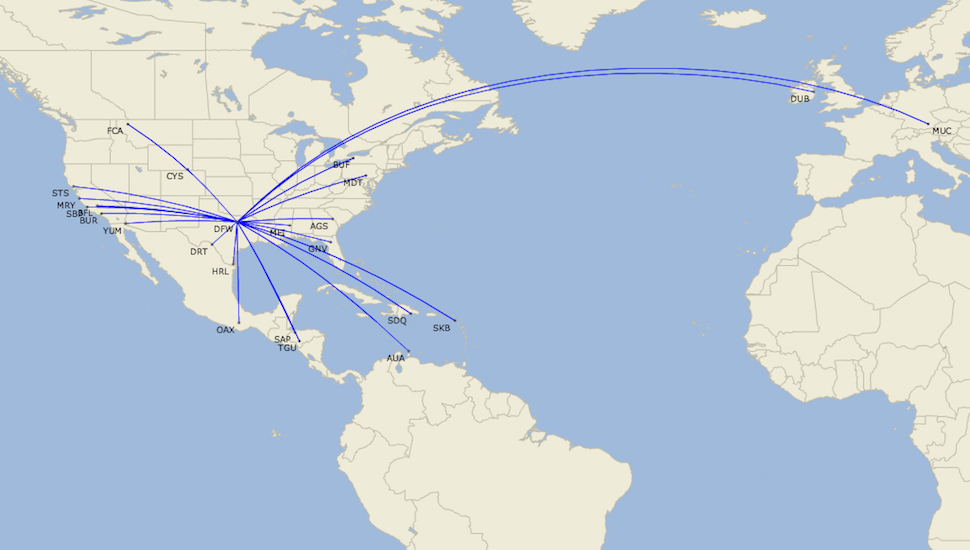 American plans to move 50-seat and smaller regional jet operations to the 15-gate terminal E satellite at DFW that opens on 3 May, said Envoy vice-president of DFW operations Jose Velez Rubio in the podcast. It plans to operate 108 daily flights from the satellite initially, increasing to 150 flights in the future.

The satellite gates, which American announced plans to use a year ago, are what make the DFW 900 initiative possible, adds Rockamore. The airline is also converting nine regional gates to six mainline gates in terminal B at the airport to support additional mainline flying.

Expectations are high for American’s DFW 900 growth plan. The carrier failed to meet its incremental revenue target of $1.35 billion in 2018, prompting Barclays analyst Brandon Oglenski to note in January that performance “pretty significantly” lagged network competitors for the year.

Executives have defended the $1 billion target for 2019, which also includes a significant contribution from American’s cabin segmentation programme, with chief executive Doug Parker emphasising his confidence in the plan in March. “2019 is going to be a great year for American,” he said.

The incremental revenue targets are part of a 2017 plan to generate $2.9 billion from commercial initiatives by 2021.

After DFW this year, American will focus capacity growth in Charlotte, where it will add four gates, next year, and at Washington National in 2021. The DC-area airport is upgrading 14 remote aircraft parking positions to an equal number of contact gates that will allow the airline to operator larger jets on nearly 30% of its flights.

“DFW, Charlotte and [Washington National] — those are all our most-profitable hubs, and we see ourselves growing into incredible strength,” said Derek Kerr, the airline’s chief financial officer, in January.

Proof will be in the DFW skies this summer, where American will put its margin-focused growth plans to the test.