China Eastern Airlines and Japan Airlines’ pursuit of a joint venture on China-Japan routes is indicative of strong traffic between the two countries.

Capacity on routes between China and Japan has been consistently robust over the last decade, CapStats data shows. It saw the strongest jump in 2015 with ASKs at 15.2 billion, up from 11.6 billion a year ago. The figure further went up to 18.3 billion in 2016, before dipping in 2017 amid heightened tensions between the two countries over disputed islands. 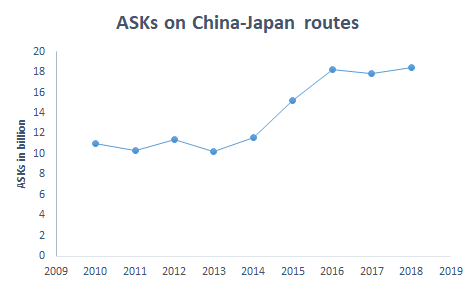 ASKs however rose again in 2018 to hit 18.5 billion. There is no sign this will slow down, with at least 13 Chinese carriers already jostling for rights to launch services into Japan over the coming months. The majority of these are to the popular tourist destinations of Osaka, Sapporo and Nagoya.

China Eastern and JAL want to implement joint venture arrangements by the end of March, should all the necessary regulatory approvals come through. 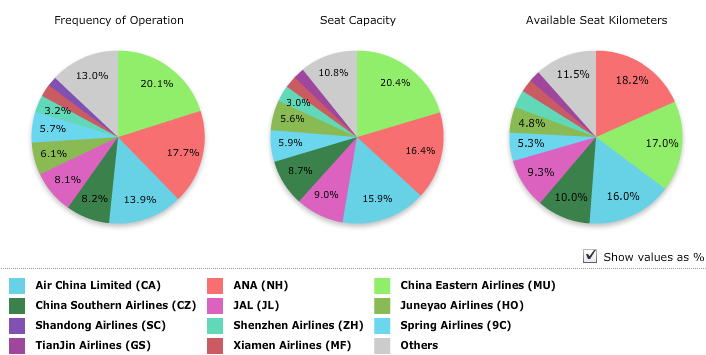 FlightGlobal schedules data shows that the largest player in the segment is China Eastern Airlines, accounting for 20.4% of all seats between China and Japan. It is followed by All Nippon Airways (16.4%), Air China (15.9%) and Japan Airlines (9%).

SkyTeam carrier China Eastern has consistently been the largest player in the China-Japan market, with ASKs having grown from 2 billion in 2010, to 3.3 billion last year. Teaming up with Oneworld’s JAL would give the duo a combined market share of about 30%. China Eastern’s subsidiary Shanghai Airlines also has a sizeable Japan network.

The two carriers, despite being from different alliances, have been codesharing since 2002 on Japan-China flights. The joint venture could see them share revenue on common routes, coordinate schedules and offer more connecting flights.

“We look to bring more benefits, more choices, and more value to our customers. We believe this partnership will generate more passenger traffic between the two countries and open up commercial opportunities,” JAL chairman Yoshiharu Ueki said. 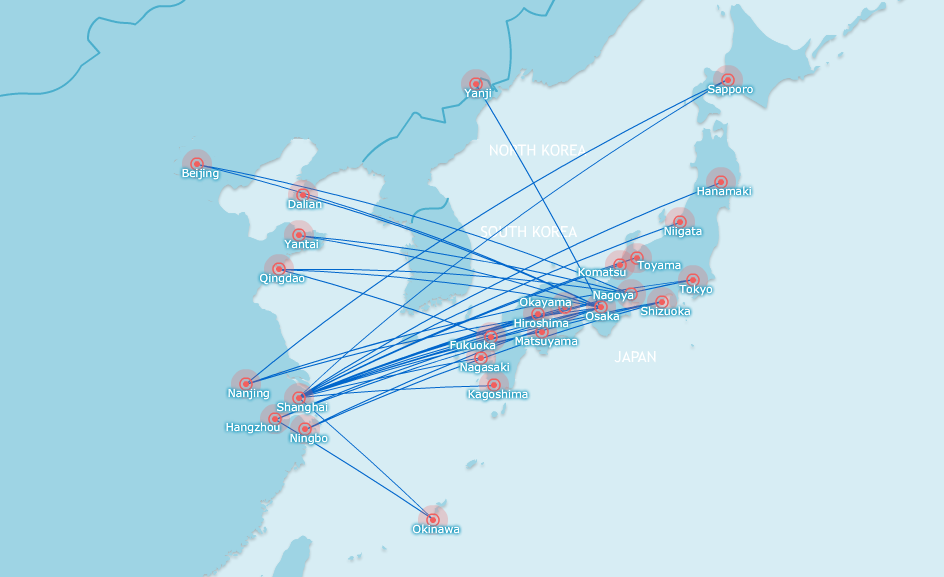 Both place a good portion of their China-Japan capacity on the Shanghai-Tokyo route – China Eastern at 37.4% and JAL at 42.5%. They also overlap on services from Shanghai to Osaka and Nagoya.

The tie-up between China Eastern and JAL could also potentially motivate Star Alliance carriers ANA and Air China to team up. These two are comparable in scale in the segment – over 30% of ANA's capacity to China is concentrated on Tokyo-Shanghai, similar to Air China's focus on the Beijing-Tokyo route.

Besides the big three Chinese airlines, private carriers Spring Airlines and Juneyao Airlines are also large players in the segment.

While most airlines increased capacity over the years, Spring has done the reverse. FlightGlobal Schedules shows that while it tripled its ASKs to Japan from 2014 to 2015, this has consistently declined from 1.5 billion in 2016 to 952 million last year. 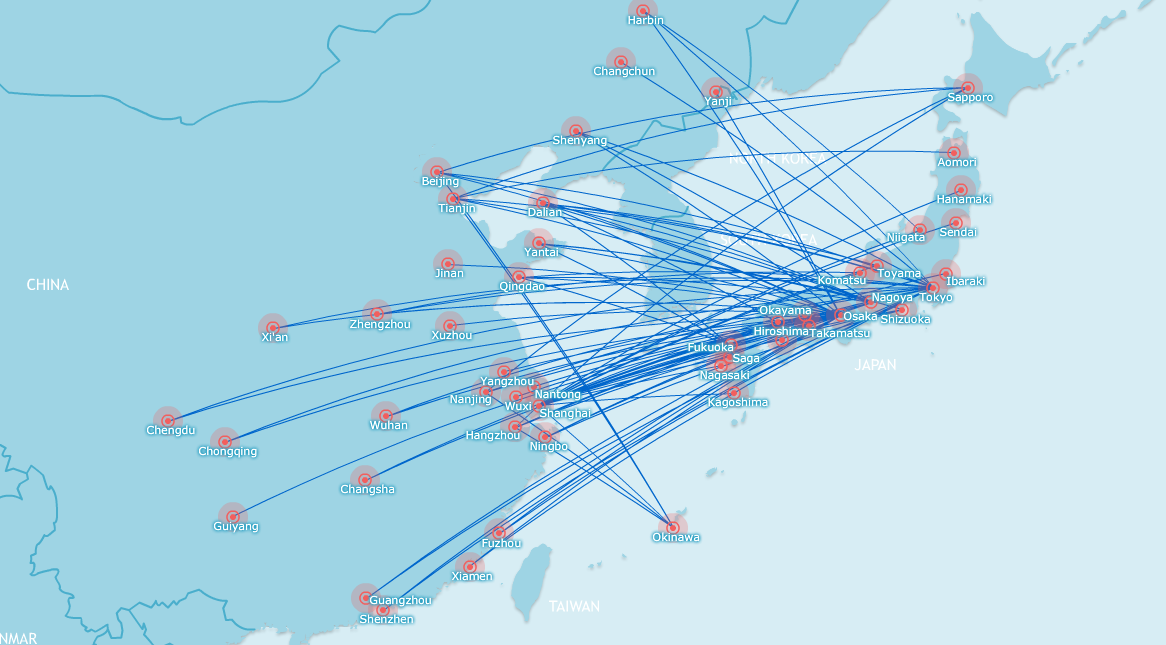 The low-cost airline has expressed frustration on the segment, saying peers followed hot on its heels and that the Japanese authorities’ swift approval of those applications has sent capacity between some China-Japan city pairs soaring. Spring believes it was a frontrunner in the China-Japan market, going strong into the segment when travel to the land of the rising sun was still deemed unpatriotic by some due to the two countries’ war history.

It did particularly well in Osaka, to which it launched services in 2014. Things went so well that within a year it linked Osaka to 18 Chinese points. About 24% of its China-Japan seats are placed on the Shanghai-Osaka route, FlightGlobal schedules show, while services from Shanghai to Sapporo and Nagoya as well as from Dalian to Osaka each account for 11.7% of its seats.

These Japanese cities look set to get even more crowded. Going by recent rights applications alone, at least eight airlines are vying to launch more flights to Osaka, mostly from second and third tier Chinese cities. Sapporo and Osaka are the other two coveted cities. CapStats shows that ASKs from China to Osaka have more than doubled between 2010 and 2018.

Japan’s foreign ministry has said that tourist visas for Chinese visitors accounted for nearly 60% of all visas issued in 2017, and that Chinese visitors make up the largest group of foreign tourists into the country. Coupled with the Japan government’s plan to boost tourism, the China-Japan sector looks set for further growth, although capacity must be managed well to avoid overcrowding and toxic competition.