Delta Air Lines introduced its first Airbus A220 today, ending what was an unexpectedly challenging road to becoming the North American launch operator of the type.

Nearly three years after ordering the A220-100, previously known as the Bombardier CS100, and nearly a year late - plus an extra week's delay for the US federal government shutdown - the Atlanta-based carrier placed the 109-seat aircraft in service between New York LaGuardia and both Boston and Dallas/Fort Worth on 7 February. 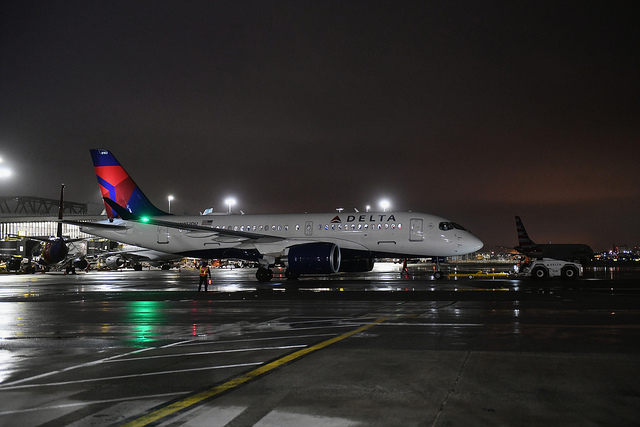 "While we've worked through a lot of challenges since that time… despite all the tariffs and trade and political challenges, we never wavered," Delta chief executive Ed Bastian told FlightGlobal at the delivery of the airline's first A220 in October. "We knew this plane needed to fly."

And fly the plane is. Beginning with just three aircraft in service today, Delta plans to have 28 A220s by year-end flying routes from coast-to-coast. Crews are based in New York today, with a second Salt Lake City base coming online in either April or May. 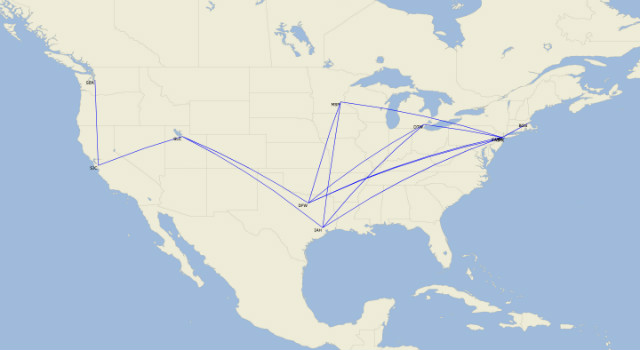 Delta A220 routes through year-end (as of 7 February)

“This is one of those chances where the plane makes a lot sense for them," says Helane Becker, an analyst at Cowen, in an interview.

The A220 will allow Delta to upgauge more 76-seat regional jet flying to mainline aircraft, a move it began with the introduction of the 110-seat Boeing 717-200 in 2013, and likely replace some of the 717s down the road.

Network benefits, however, are not the only opportunities with the A220. The airline's Delta TechOps division is the exclusive maintenance provider in the Americas for the Pratt & Whitney geared turbofan engines on both the A220 and Airbus A321neo, the PW1500G and PW1100G respectively, and its Delta Flight Products division has dived into the inflight entertainment business developing the in-seat passenger displays on the A220.

Delta expects a double-digit economic benefit with the A220. It forecasts a 20% fuel burn reduction, in addition to the bump in premium seat revenue, as the new aircraft displaces 76-seat Bombardier CRJ900s on routes.

But as Keay points out, the other revenue benefits that Delta is deriving from the aircraft are significant.

The P&W engine deal is expected to boost Delta TechOps revenues by up to a third to more than $1 billion annually in coming years, Bastian said in May 2018. The MRO division generated roughly $750 million in annual revenue at the time.

The inflight entertainment investment is more of a wild card. Delta chief operating officer Gil West told investors in December that the airline was able to engineer, certify and manufacture the system on the A220 at “a fraction of the cost point that we pay today” to outside vendors.

In addition, the system developed for the A220 is wireless and uses tablet displays, a reduction in weight that could generate significant operating cost savings.

Other US carriers, particularly American Airlines and United Airlines, have preferred to remove in-seat entertainment systems on narrowbody aircraft due to the cost and weight of those systems. They have moved to streaming options that require passengers to use a personal tablet or other device.

Delta plans to install the wireless seatback entertainment system on its new Airbus A321neos and Airbus A330-900s, as well as on Boeing 767-400ERs as they are retrofitted.

The carrier is not stopping there though. Delta wants to sell the new inflight entertainment system to Airbus, as well as to other airlines, says West.

Delta Flight Products, manufacturer of the new entertainment systems, "aims to be a major player in inflight entertainment and cabin retrofit work" writes Seth Miller on Paxex.aero. "It is well funded and could significantly disrupt the market."

The question is whether Airbus and other airlines will buy the system, which Miller points out could be costly to Delta if the carrier is unable to achieve production economies of scale.

Delta, for its part, has already expressed its confidence in the A220 where it matters – with its pocket book. The airline added 15 A220-300s to its orderbook, increasing its total firm commitments to 90. It also converted 35 -100 orders to the larger -300s at the time.

Delta's journey from ordering the then-CS100 in April 2016 to introducing the A220 today was bumpy. While initial concerns included run-of-the-mill new aircraft production delays and issues with the P&W GTF engines, a trade spat between Boeing and the Canadian airframer almost derailed the first flights well into the 2020s.

Boeing, claiming damages from Bombardier's discount to Delta for the CSeries, filed suit against the Canadian airframer with the US International Trade Commission (ITC) in April 2017. The Chicago-based company argued that Bombardier was essentially dumping the aircraft in the US market, and hurting sales of its own 737 Max 7.

While Delta disputed these claims, with executives saying it never seriously considered either the 737-700 or Max 7 as an alternative to the CS100, initial rulings in the case were against Bombardier. The US Department of Commerce proposed a nearly 220% tariff on the aircraft in September 2017, a number that was upped to nearly 300% the next month.

As a result of the tentative ruling, Bombardier reached a deal with Airbus to sell the majority of the CSeries programme to the European airframer. This included plans to build a new final assembly line in Mobile, Alabama, that could skirt the proposed tariffs.

However, in a surprise to many, the ITC found no damage to Boeing and threw out the proposed tariffs in its final ruling in January 2018.

This allowed Delta to move forward with taking delivery of its first A220 last October, officially an Airbus model after the sale by Bombardier closed that July.

The A220 "will be an integral part of our future domestic fleet and will deliver an experience our customers will look forward to every time they fly," says Delta vice-president of New York and sales east Chuck Imhof at the launch festivities at LaGuardia today.