The number of international-arrivals capable gates were boosted to eight as part of the concourses D and E connector project that opened in 2016. Then raised again to 14 gates for arrivals – though only 10 for departures – with the extension of concourse E last year.

"As we look to the future, we need more [international] capacity," said Paul Wiedefeld, then chief executive of the airport, at the 2013 ground breaking of the D/E connector project.

The investments have seen moderate success. Since they began in 2013, the number of international travellers passing through BWI has increased nearly 58% to 1.33 million in 2018, airport data shows. This is up from a low of 320,203 international passengers in 2009, US Department of Transportation data shows.

Part of that growth was driven by the decision of the airport's largest tenant, Southwest Airlines, to launch international flights from BWI in 2014. It operated nearly 47% of all international seats from the facility last year, Cirium schedules data shows.

But international growth at BWI may be on course for a correction. Wow Air, one of the airport's fastest growing operators, closed its doors in March, and Icelandair has pulled its seasonal summer service from schedules, moves that together Cirium schedules show have pushed forecast international seat growth down 8% year-over-year in 2019. In addition, Southwest's network priorities have shifted away from new international services from the facility.

BWI has long been a secondary international gateway to the Washington DC-area after Washington Dulles International airport. In 2018, it handled less than a fifth of the eight million international passengers that passed through the Eero Saarinen-designed gateway in DC's western suburbs.

They tout BWI's low costs, that at $9.27 per passenger boarded on a flight are the lowest of the DC region's three airports, and easy road and transit access including to Baltimore and central Washington DC.

Discount carriers, with limited international reach, dominate BWI. Allegiant Air, Frontier Airlines, Southwest and Spirit Airlines, whose networks only extend as far as the Caribbean and Latin America, will operate more than three-quarters of seats from BWI in 2019, schedules show. They make up just 3.3% of seats at Dulles and 17% at National.

Decaire describes Southwest's international network from BWI as "mature" when asked why the airline has not added a new destination outside the USA from the airport since 2015.

“It’s a not a statement on the strength of the market but it’s an issue of how many airplanes we have," he says. The airline has focused aircraft on building gateways at Fort Lauderdale and Houston Hobby in recent years, and on beginning service to Hawaii this year.

Southwest uses BWI – the second largest base in its network – as an international connecting point for travellers from the Northeast to the Caribbean, says Decaire. This strategy is likely to continue as it grows, with Baltimore likely figuring into any new international expansion, for example to Canada, he adds. 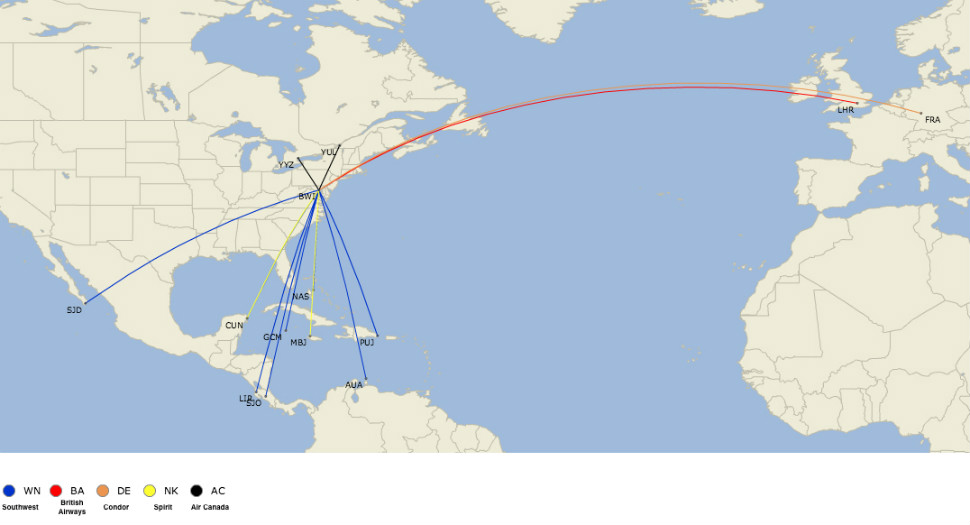 In addition, the dominant low-cost carriers at BWI lack foreign partners that could add service to the airport. Other airports have successfully leveraged the international partnerships of their primary carriers to land new long-haul flights, for example JetBlue Airways' partner Emirates began service to Fort Lauderdale from Dubai in 2016.

Norwegian, which has proven to be the most lasting independent long-haul low-cost carrier across the transatlantic, has yet to make BWI work. It served the airport seasonally from Guadaloupe and Martinique from 2015-2017 but suspended the service as uneconomical.

Thomas Ramdahl, the Oslo-based carrier's chief commercial officer, told FlightGlobal in 2018 that service to either BWI or Dulles would require more frequencies than it was then able to operate with its fleet of Boeing 787s, and was outside the range of its Boeing 737 Max narrowbodies.

"We will be looking at the Washington area… I think it will be a [Airbus] A321LR destination," he said at the time. Norwegian expects its first A321LR this year.

The BWI spokesperson acknowledges that international markets provide the "greatest potential growth" for the airport, but does not provide additional specifics on how it plans to land more international air service.

International passengers at BWI could decline for the first time since 2009 with the losses of Icelandair and Wow. However, the correction may only be to 2016 or 2017 levels - still well above where traffic was when Wiedefeld kicked off the D/E connector project in 2013. And Southwest, despite Decaire calling its international network at the airport "mature", continues to grow.

For the time being, Washington Dulles continues to land the DC-area's new headline international services. Alitalia began service from Rome on 2 May, EgyptAir will begin flights from Cairo in June and Cathay Pacific Airways added flights from Hong Kong last September.