It is perhaps easy to lump the demise of Germania in with the list of recent European airline failures – assuming it to be yet another casualty of a harsh market environment, and proof of the need for consolidation.

Berlin-based Germania pointed to tough conditions last month when it disclosed that it was seeking a financial rescue package. It blamed a rise in fuel prices in 2018, coupled with the weakening of the euro against the US dollar. It also highlighted delays in the phase-in of new aircraft as the major cause of its liquidity crisis.

But to blame everything on conditions is to omit the role that Germania's own strategy may have played in its demise.

There has been no shortage of commentary recently on challenges in the German market.

On 4 February, Ryanair chief executive Michael O'Leary labelled Germany a "torrid" market, saying there was "no sign" of stronger yields there.

"The volumes are there but the yield is not," argues Joussen.

FlightGlobal schedules data shows that despite high-profile airline failures such as the collapses of Air Berlin in 2017, XL Airways Germany in 2013 and LTU International in 2011, the German short-haul sector has grown strongly over the past decade.

In 2010, total seats offered on scheduled flights between Germany and Europe reached some 178 million. Apart from 2012, when seat totals were almost flat, and 2013 when they dipped slightly, scheduled seats grew by roughly 5-10 million per year. In 2017, that trend accelerated when 11 million seats were added, for a total of 216 million. 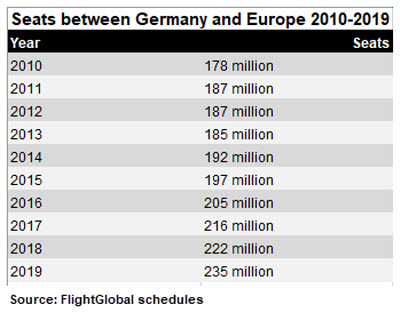 Germania's own story over the past decade has also been one of rapid growth, beginning with the establishment of wholly owned maintenance arm Germania Technik Brandenburg, in 2011.

In July 2016, the carrier ordered 25 Airbus A320neos, which, it would later transpire, were intended to completely replace Germania's Boeing 737 fleet.

Elsewhere, Germania established itself in some unlikely places, becoming a major player in Kosovo and offering connections to destinations in Iran and Iraq.

The two airlines had had an unusual relationship over the decades, marked by both fierce competition and co-operation. They shared a technical base at Berlin Schonefeld and in 2005, there had begun a period when both airlines were managed by then Air Berlin chief executive Joachim Hunold.

But as the then Etihad partner airline began to shrink, Germania moved into its vacated space.

In 2017, Germania opened a base in Majorca, a market in which Air Berlin was reducing capacity at the time. Schonefeld-based Germania also opened a new base at Tegel – Air Berlin's then headquarters.

Elsewhere, Germania increased its activity in Dusseldorf and added capacity from places such as Zurich to traditional Air Berlin markets such as the Canary Islands.

Carl Denton, managing director of Sven Carlson Aviation Consulting, believes that this attempt to "fill the gap" that was left by the collapse of Air Berlin may have backfired on Germania.

He says that replacing Air Berlin proved to be a "massive distraction", with "a lot of people chasing replacement capacity", leading to a collapse in yields in those markets.

Denton says market conditions such as the fuel price and currency issues do not tell the full story of Germania's demise because "that's the same for everyone".

In a similarity with the now-defunct Monarch, Denton says, Germania suffered from being at the "end of the food chain", with passengers and tour operators preferring to use the likes of Lufthansa and EasyJet.

The carrier's strategy, from 2017, of adding capacity into smaller German cities may have left Germania exposed to wider market dynamics, he posits.

Germania's operations at these secondary airports were typically "costly types of operations that were more thirsty on crew and overhead", says Denton.

Secondary airports, he notes, are also the first places to shrink in a "contracting market".

Finally, Denton says the compensation the Berlin-based carrier paid out for flight delays under EU rules may have played a part in its collapse.

In an analyst note released on 5 February, Bernstein senior research analyst Daniel Roeska noted Germania's "aggressive growth" story in Germany, Switzerland and Austria, with the Berlin-based carrier expanding from approximately 500,000 seats per year in 2008 to almost 6 million planned for 2019.

He recalls a strategy presentation that the airline's chief executive, Karsten Balke, gave in 2017. Balke stated that Germania was seeking to avoid competing with low-cost carriers and full-service operators, to instead focus on what Morris calls the "shrinking middle" of focusing on niche tourism markets while offering a high-quality product.

At the same time, Morris says, there is evidence that Germania was "spread very thin" – trying to offer too many frequencies on too many routes.

While Germania was growing, so too was Lufthansa Group, with both companies expanding as Air Berlin shrank. The German airline group has made it clear it intends for its subsidiary Eurowings to become a major player, not just in Germany but across Europe, while its war of attrition with low-cost carriers in its German core markets will have only made the market tougher for Germania.

The financial data that is available suggests that Germania's growth was not translating into profits.

In February 2017, the carrier's director of sales, routes and systems Claus Altenburg indicated that the leisure carrier was eyeing a profit that year after struggling to break even amid turmoil in Turkey and Egypt the previous year.

Financial data published in the Bundesanzeiger register shows that Germania incurred a net loss of €7.7 million ($8.7 million) in 2016 – the most recent information available – a rise from €6.8 million in 2015.

FlightGlobal schedules data indicates that the collapse of Germania will have little impact on overall seat numbers in its home country.

The data shows that the leisure airline accounts for less than 1% of the total seat capacity from Germany as of February, equating to just over 100,000 seats. Even in Berlin, it accounts for just 1.6% of seats. 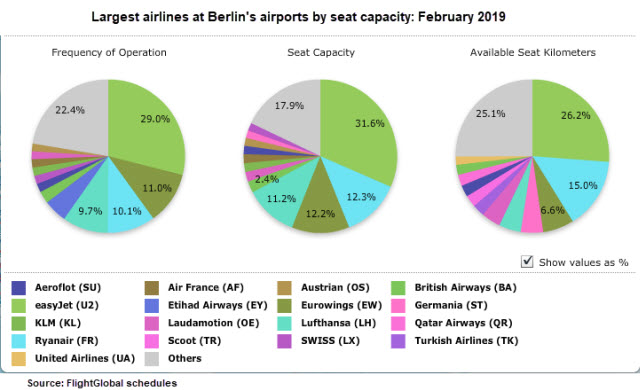 Jorgen Kearsley, general manager for aviation marketing at Hamburg airport, says the collapse of Germania will have a limited impact on the gateway. The airline was responsible for approximately 145,000 passengers per year and had one aircraft stationed at Hamburg, he says.

Perhaps two-thirds of passengers were delivered by tour operators, Kearsley says, adding: "I think these tour operators will find other carriers [to fill the void]."

But it may prove difficult to attract a new airline to take over some of Germania's routes, such as Tel Aviv, that represented quite "long legs" from Hamburg, he adds.

Kearsley says airports such as Bremen, Munster Osnabruck, Nuremberg and Rostock are more exposed by Germania's collapse. Erfurt, where Kearsley says the leisure carrier accounted for some 80% of traffic, will be particularly badly affected, he believes.

FlightGlobal schedules data shows that Germania accounted for 10% of the market at Bremen. The airline is meanwhile one of only two scheduled airlines serving Rostock in February.

"It will be for these smaller airports to replace Germania," Kearsley says, adding that the question now is whether the tour operators in northern Germany can find alternatives.

He theorises that consolidation could occur, with tour companies deciding to centralise their businesses at larger airports – such as Hamburg – at the possible expense of smaller German gateways.

Roeska says the "clear beneficiary" of Germania's bankruptcy will be SunExpress, a joint venture between Lufthansa Group and Turkish Airlines. TUI and Thomas Cook can also expect to benefit, and to a lesser extent EasyJet and Ryanair.

"We would expect the bankruptcy of Germania to prompt tour operators to quickly buy short-term capacity, especially for already-booked Easter vacations," he adds.

In a note published on the same day, Goodbody aviation analyst Mark Simpson says a number of slots at German airports will now be up for grabs, which he expects will be of "interest" to Ryanair and its Laudamotion unit, which is "heavily focused on German to Spain flows", with Palma slots being particularly valuable.

In a note issued on 5 February, Credit Suisse head of European transport equity research Neil Glynn suggests that the collapse of Germania may "ease pricing pressure on German short-haul routes".

Flight Fleets Analyzer shows that World Star Aviation, accounting for seven of the A319s in Germania's fleet, is the most exposed lessor.

Germania also uses a hangar at Berlin Brandenburg, and rents one in Bremen. The hangar in Brandenburg had been Air Berlin's, with half of it assigned to Germania.

The other half is used by Lufthansa Technik's business-jet maintenance joint venture with Bombardier, Lufthansa Bombardier Aviation Services, and the MRO provider may seek to take over the facility completely.