The demise of Jet Airways has opened up new international opportunities for India’s remaining airlines, with most airlines grabbing the opportunity with both hands.

Before its slow descent towards its 17 April suspension of operations, around two-thirds of Jet’s capacity was on international services, making it the second largest operator of seats from India after flag carrier Air India.

Since the airline suspended operations, New Delhi has been scrambling to reallocate a number of bilateral rights and airport slots to other Indian operators. Some in the Indian media have questioned how the Ministry of Civil Aviation has been allocating those rights and slots, but indications are that most carriers have benefited from the process.

In recent weeks, IndiGo, SpiceJet and Vistara have announced new routes from Mumbai, most of which are directly replacing seats previously operated by Jet. 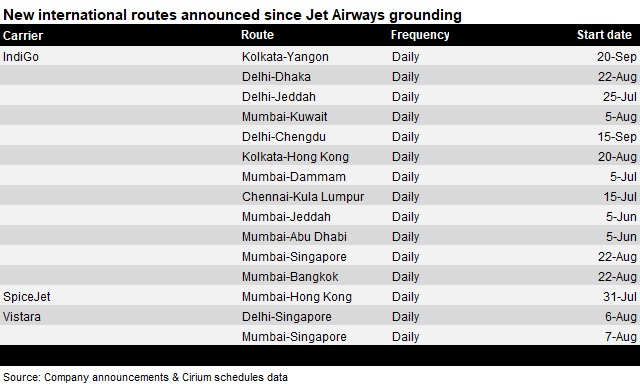 IndiGo has launched the most new routes, but not all of them are directly linked to Jet’s demise. Prior to the collapse of its rival, the carrier had foreshadowed that around half of the 30% increase in capacity it has planned for the 2019/20 fiscal year would be on international routes.

A number of those include new links to destinations already connected to its network, such as Kuala Lumpur and Bangkok, albeit from new cities in India. That most routes have launched with a daily frequency may illustrate both the constrained demand and the simple operating principles that the carrier has.

Vistara’s two routes to Singapore will be its first international operations when they start in early August. The carrier reached the all-important 20 aircraft fleet to gain international rights last year, and had been expected to launch Colombo as its first route.

Nonetheless, Singapore makes complete sense for Vistara, given it is the home port of 49% shareholder Singapore Airlines. Further expansion on long-haul routes will likely occur in 2020, when the carrier expects to receive its first Boeing 787-9.

At the other end of the scale, SpiceJet talked a big game in April with plans to launch flights from Mumbai to Colombo, Dhaka, Riyadh, Hong Kong and Kathmandu from late May. However, June schedules data shows that it has only launched one route – Mumbai-Hong Kong – perhaps signalling that it was not awarded the routes it was seeking.

More growth will come soon from Air India and its budget unit, Air India Express, which have been granted several route allocations and additional seats.

Officially, the international routes awarded to other carriers are only on a temporary basis. In theory, if Jet can secure a buyer through the bankruptcy resolution process, those could be returned to the airline. For now, though, the prospects of that seem unlikely, given the failure of the previous search for new investors.

On the domestic front, the capacity lost from Jet’s exit appears to have already been filled, at least according to IndiGo chief executive Ronojoy Dutta.

“Domestically we just don’t see a big change. Like we said, March was strong, April was strong, but by June the effect was almost zero,” he told analysts during the airline’s second quarter earnings call.

“The scramble now really is to replace most of [Jet’s capacity], so this is not added capacity, it is Jet capacity that went down and is being replaced partially by us, partially by Spice, Vistara and so forth. So you don’t see a net-net increase in capacity.”

Dutta’s assertions at the macro level are supported by Cirium schedules data for the third quarter showing that domestic ASMs are only set to rise by 3.9%, relative to the third quarter of 2018. By comparison, Q3 2017 against Q3 2018 showed ASM growth of 15.2%. 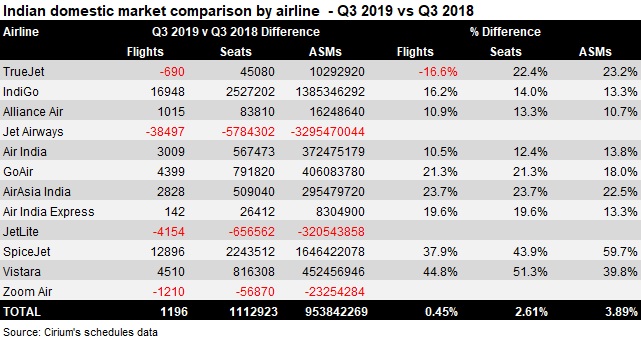 The third quarter is generally seen as the weakest one in India but recent talk of an economic slowdown in the country may also be causing some carriers to dial back growth plans.

Dutta says that IndiGo didn’t see any evidence of that during the second quarter. However, booking trends for tickets up to 15 days prior to departure – where carriers usually drive up prices – were showing some signs of softening in the third quarter.

Despite talking down the impact of Jet on the market, IndiGo is planning to operate nearly 17,000 additional flights across its network in the quarter, making it one of the largest contributors to plugging the 42,000 flights lost from Jet and its JetLite unit, based on their schedule over the same period in 2018.

Relative to its network size in the previous corresponding quarter, SpiceJet added the most capacity by ASMs, up 60% as it added almost 13,000 new flights to its schedule. That largely reflects the addition of former Jet Airways aircraft into its fleet, most of which are being used on domestic trunk routes, such as Mumbai-Delhi.

In the full-service sphere, Vistara is continuing its ramp-up, with its capacity up 40% as it added over 4,500 new flights compared to the same period the year before. Air India’s capacity will rise 14% with just over 3,000 new flights to be operated in the domestic market.

The other budget carriers are not standing still, with AirAsia India planning to up its ASMs by 23% as it adds just over 2,800 new flights to its schedule for the quarter. Go Air is also slated to operate 18% more capacity by adding around 4,400 flights to the market.

The domestic numbers show that Jet’s capacity has been replaced, but it is hard to tell if the relatively low capacity growth over the third quarter has bigger implications.

Given IndiGo is by far the largest carrier in the market, comments that there is some softening in the 0-15 day market could be a sign of wider softening. Alternatively, it may just reflect the traditionally weaker season. Either way, it appears hard to call if there is a structural issue or just a blip.

The domestic market aside, it is clear international will be a growing focus for India’s carriers – at least as far as the country’s bilaterals allow it. That may put pressure on New Delhi to seek more liberal arrangements with other countries to allow more than one or two carriers on a route. This in turn promises to open up a larger market for outbound Indian tourism.

For now, it is clear that the gap left by Jet’s exit from the market has been plugged, and a new chapter is taking place in India’s skies.