JetBlue Airways is lowering its expectations for capacity growth because Airbus has said it will deliver no more than six A321neo aircraft to the airline during 2019 instead of the 13 aircraft the carrier originally expected.

JetBlue chief executive Robin Hayes says during an earnings call on 23 July that the airline is “very disappointed with the continued delays to our A321neo program” owing to customisation complexity around the Airbus Cabin Flex concept.

The New York-based airline’s capacity grew by 5.9% year-on-year during the second quarter ending 30 June, but the airline expects capacity to increase 3% to 5% during the third quarter, which Hayes says is unusually low for the company. The total capacity for 2019 compared with 2018 is now projected to increase between 5.5% and 6.5%. This projection is lower than the capacity increase Hayes presented during investor day in October, when he projected a 5% to 7% increase for 2019.

The airline reported a $250 million operating profit for its second quarter, bouncing back from an operating loss of $152 million during the second quarter of 2018. That reversal is due in part to the airline phasing out its Embraer E190s as the carrier becomes an Airbus-only operator.

The airline does not expect this slow capacity growth to impact its earnings per share guidance because it has enough notice to incorporate a new delivery schedule into the airline’s 2020 planning, JetBlue chief financial officer Steve Priest says during the call.

JetBlue in June converted 13 Airbus A321neo orders to orders for the longer-range A321XLR, which debuted at the Paris air show. It also exercised options firming orders for 10 Airbus A220-300s for a total backlog of 70 aircraft of the type. Deliveries of the A321XLRs will begin in 2023 while the additional A220-300s will deliver from 2025. 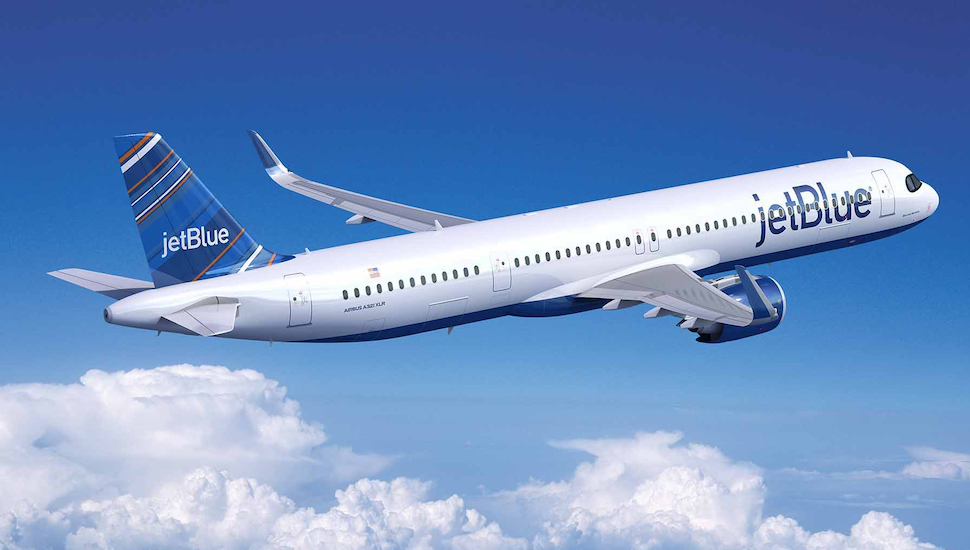 During the second quarter operating revenue grew by 9.2%, rising to $2.1 billion from $1.92 billion compared with the same quarter one year ago. Total operating expenses dropped 10.8% year-on-year from $2 billion to $1.85 billion. Revenue per available seat mile (RASM) climbed by 3% year-on-year from 12.74 cents to 13.14 cents. This was partially offset by increased operating expense per available seat mile (CASM) excluding fuel costs, which rose 1.8% from 8.32 cents to 8.46 cents.

Since December, the carrier has decreased its debt from $1.67 billion to $1.49 billion.

Looking ahead to the third quarter, the company predicts RASM increase to range from 0.5% to 3.5%, while CASM excluding fuel is expected to increase between 0.5% to 2.5%.

Cost savings is part of the airline’s strategy as it increases reliance on Airbus aircraft. As part of that plan, JetBlue awarded German engine specialist MTU Aero Engines a contract to maintain a subfleet of the International Aero Engines (IAE) V2500s powering the carrier’s Airbus A320s, around half of the airline’s existing fleet of that aircraft type. The 13-year agreement will begin in 2020 and will include fleet management, engine trend monitoring, and joint fuel-saving efforts with the airline.

JetBlue emphasises plans to increase frequency of flights from locations including Boston, where the carrier plans to start trans-Atlantic service in 2021.

In response to analyst questions on the call about competitiveness in that city, JetBlue chief operating officer Joanna Geraghty says “we see a clear preference for JetBlue” and that trans-continental service from that city is “performing very well”.

Analysts during the call raised concerns about the possibility of tariffs being imposed on aircraft as a result of sparring between Europe and the USA over subsidies paid to airframers Airbus and Boeing. In response to questions about a retaliatory tariffs that could follow an arbitration of the dispute by the World Trade Organization in September, Hayes says “we are confident that eventually that will get resolved”.

Tariffs on aircraft built in Europe or the USA “would be devastating for the entire airline industry whether you are a Boeing or Airbus operator”, Hayes says.

President Donald Trump declared in May that some vehicles and parts imported from Europe pose a national security threat and has raised the possibility of targeting European aircraft imports to the USA.

Responding to JetBlue’s earnings, aviation analyst Jamie Baker of JPMorgan says in a note to investors “we see little to perturb the market despite prevailing estimates that are unlikely to strengthen in the near-term”.