China Eastern Airlines and Juneyao Airlines look set to strengthen their positions in Shanghai, as they move closer through a cross-shareholding partnership.

In November, China Eastern announced that controlling shareholder CEA Holding will take a stake of around 15% in Juneyao through a share transfer and a non-public share issue.

In turn, privately owned Juneyao will subscribe to China Eastern's non-public issue of Shanghai- and Hong Kong-listed shares. Upon completion, Juneyao Group and related companies could take a stake of up to 5% in China Eastern.

State-owned China Eastern has said that the investment is "significant in further enhancing and deepening the strategic partnership" between the two airline groups and to establish Shanghai as an aviation hub. Both carriers have their main bases in Shanghai, as well as also having hubs in Nanjing.

The partnership would effectively give the duo a combined 50% share of the market out of Shanghai, FlightGlobal schedules data shows.

China Eastern holds 29.5% of all seats out of the Chinese financial centre, followed by its wholly owned subsidiary, Shanghai Airlines (12.2%), while Juneyao accounts for 8.6% of seats. The other major players are China Southern Airlines (8.5%), as well as Air China and Spring Airlines, each of which hold 7.3% of seats. 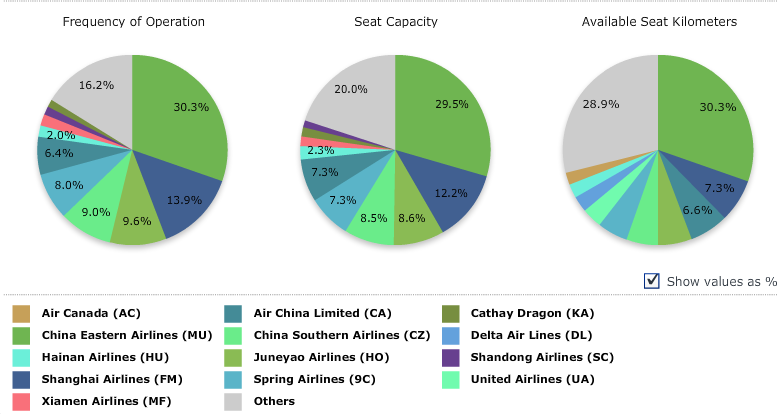 The top three routes out of Shanghai are to Beijing, Shenzhen and Guangzhou.

China Eastern and Juneyao have been close since 2013, codesharing on several domestic routes. Juneyao tells FlightGlobal that it puts its code on 76 China Eastern flights, while China Eastern has it code on 150 of its services. These are mainly Shanghai and Nanjing-based flights, covering major cities including Beijing, Guangzhou and Shenzhen.

From last October, the duo also started “collaborative booking” on their websites, where passengers can book China Eastern flights on the Juneyao site and vice versa. This, they say, is a first between two Chinese airlines.

Even when Juneyao became a Star Alliance connecting partner in 2016, it made clear that it would continue its partnership with SkyTeam member China Eastern.

Joanna Lu, head of advisory Asia at Flight Ascend Consultancy is of the view that the two carriers could take the opportunity to review their networks and make better use of slots at the coveted Shanghai hub. This is since there are overlaps in their services out of the city.

She believes the partnership will not "change the current status quo immediately" but is hopeful that it would "drive some reviews in network development, fleet purchasing and resource sharing".

FlightGlobal schedules data shows that the two carriers' networks overlap on more than 10 domestic routes including those to Xian, Chengdu and Chongqing, as well as to regional destinations such as Chiangmai, Bangkok, Jeju and Japan.

While becoming closer will benefit the airlines and further boost their strength in the Shanghai market, passengers would not welcome the possible drop in competition, analysts also note.

China Eastern has said that taking a stake in Juneyao is in line with the Chinese government's push for more co-operation between state-owned and private capital. Beijing wants to introduce mixed ownership between the government and private sector, aimed at driving efficiency in state-owned enterprises, separate government work from day-to-day management of businesses, and bring these firms more into line with corporate best practices.

Juneyao, meanwhile, sees partnering with China Eastern as a way of raising its competitiveness and boost its global brand as it seeks to accelerate international expansion.

This is critical since the largely domestic carrier wants to expand internationally with the deliveries of its Boeing 787s, but is hardly known outside China. It will use the aircraft type to launch its first intercontinental route to Helsinki in June. For now, its only international services are to Japan and a few points in Thailand and the Philippines, FlightGlobal schedules data shows.

A partnership with China Eastern, coupled with its Star Alliance connecting partner status, will hence surely aid its case.