At the beginning of 2018, Vienna International airport could count itself among a select group of European hubs that had remained largely unaffected by the low-cost carriers' onward march.

While it is true that EasyJet, Eurowings and Vueling all operated services to the Austrian capital, each had a relatively small presence at the gateway compared with the dominant carrier there: Austrian Airlines. EasyJet had chosen to register its mainland European business in Austria as a response to Brexit, but the UK carrier bases no aircraft at Vienna.

Those seeking cheaper alternatives would have needed to drive the short distance to Slovakian capital Bratislava, or perhaps further to Budapest, where Ryanair and Wizz Air held sway.

But within the space of 12 months, various unexpected events have made the Austrian capital's airport a key battleground for the biggest European low-cost carriers.

In January 2018, Wizz disclosed plans to add Austria to its network later that year, with the establishment of a base at – and 17 routes from – Vienna. Two months later, the airline outlined further increases in the number of based aircraft and routes.

Also in January 2018, it looked as though IAG would pick up Austrian regional carrier Niki – at the time Vienna's third-biggest carrier, after Austrian and its sibling Eurowings – from the sale of Air Berlin's former assets.

That deal collapsed in dramatic fashion later that month, after a legal technicality led to insolvency proceedings for the regional carrier being scrapped in Germany and reopened in Austria.

The airline's founder Niki Lauda ultimately emerged as the victor in that new sale process and retook possession of his former carrier, renaming it Laudamotion. If that were not surprising enough, Ryanair went on to secure a 25% stake, using it to finally break into the Vienna market. The Irish carrier has since taken 100% ownership of the now-rebranded Lauda.

Perhaps stung by its failure to acquire Niki, IAG announced it would be ratcheting up its offering at Vienna. Later in 2018, the airline group created a new Austrian-registered airline, Anisec Luftfahrt, under the parentage of IAG subsidiary Vueling. Anisec Luftfahrt became an Austrian branch of Level and started offering leisure focused short-haul services from the city.

The influx of new low-cost services in Vienna during the summer of 2018 led Wizz chief executive Jozsef Varadi to characterise the market as being "a bit of a bloodbath" in an interview with FlightGlobal earlier this year.

And, speaking during a panel debate at the Routes Europe conference in Hannover earlier this month, Vienna airport's vice-president of aviation marketing and business development Belina Neumann described the past year-and-a-half as a "really, really crazy period" for the gateway.

"Things happened very fast. One day you think Lufthansa are going to acquire Niki, the other day you think it's IAG group, then you go to bed and, boom, Niki Lauda is back in business. You think you must be dreaming," she said.

Neumann tells FlightGlobal that the immediate result of all this growth was that the number of "Lufthansa monopoly routes" decreased. Some trunk routes to destinations such as to Paris, London and Barcelona are now being operated by three, four or even five carriers.

The airport calculates that during this summer only two of Lauda's 19 routes from Vienna are monopoly routes. Wizz is offering 31 destinations this summer, of which 12 are free of competition.

Neumann also points to data provided by RDC showing that yields on major trunk routes have diminished as competition has increased.

Such a situation is unlikely to continue, she argues, warning that airlines are likely to discontinue services in light of the intense competition.

One thing that she describes as "absolutely new" is the way in which carriers have marketed and promoted new services.

An example she gives is Level offering €0.01 discount fares, taxes included, from Vienna. She says the carrier is understood to have sold 35,000 seats in two hours through that promotion.

Wizz, meanwhile, offered winners of a competition the opportunity to fly for free from Vienna to a mystery destination.

Such moves have contributed to an across the board surge in passenger numbers at the Viennese gateway, rising 11% to more than 27 million. Lauda added some 600,000 passengers, EasyJet more than 500,000 and Wizz more than 400,000. Austrian grew the most, adding a million passengers during this period, says Neumann.

But while low-cost carriers are growing at a fast rate, Austrian Airlines and the wider Lufthansa Group still remain by far the largest player in the market.

EasyJet and Vueling grew their traffic at the gateway by more than 60%, while Eurowings grew its numbers by 10%. 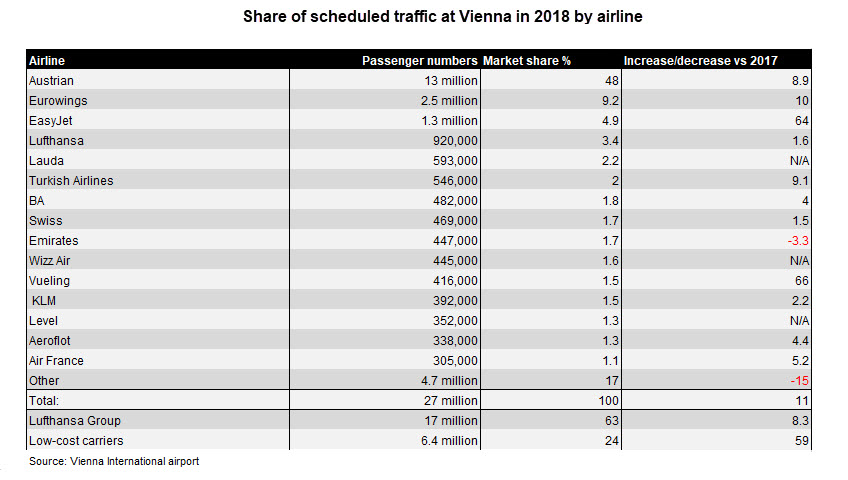 It is also interesting to note that, with the exception of Emirates – which saw passenger numbers fall 3.3% – all other major carriers operating at Vienna grew their traffic in 2018, suggesting that the budget carriers are stimulating new demand rather than just taking share from the incumbents.

Neumann says the airport expects LCCs to account for 25-30% of total passenger traffic this year.

Cirium schedules data shows that by far the biggest destination for carriers operating from Vienna is to Germany, representing 19% of the total. This is followed by Italy, Spain and the Canary islands, each with 6.7%, and the UK with 5%. 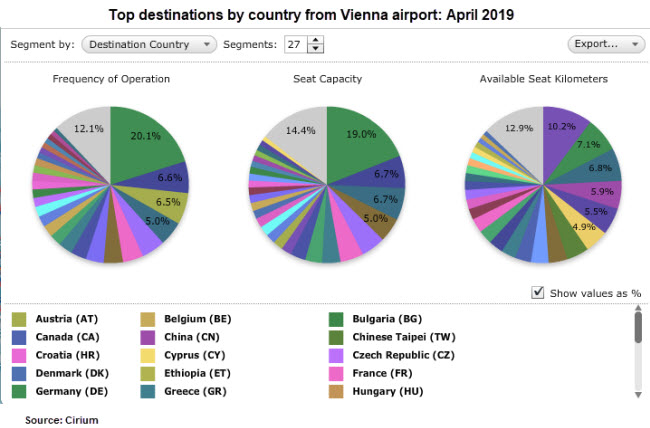 Beyond the low-cost growth, Neumann says Vienna experienced strong growth in the long-haul market. In 2018, Thai Airways transported 100,000 passengers to and from Vienna for the first time.

A new Tokyo service operated by ANA will be added this year, and China Southern arrives at the gateway in June.

Speaking on the same panel debate at Routes Europe as Neumann, Austrian Airlines' senior director of network management Alexandra Goldschmidt said that the Lufthansa Group carrier's initial reaction to the low-cost influx was to increase frequencies and aircraft gauges in its core markets.

This was something it had already put in motion following the exit of Air Berlin and Niki, Goldschmidt says, as Austrian foresaw untapped demand amid "too little capacity".

She says that today the airline is more present on routes to the German market, for example, as a result.

"[It is] very important to be present on the trunk routes – on the big routes – where there is high demand," she says. "You need to be out there with a really good schedule, which does not mean five times a week at different times, [it means] at least two or three times a day, maybe even more if there is huge demand."

Goldschmidt says Austrian works closely with its stablemate Eurowings to co-ordinate their schedules and feeder options as efficiently as possible. Another key advantage is that the two airlines have strong brand awareness in the Vienna market – something both are trying to increase.

"They [the public] can see the offer of the whole group versus a low-cost point-to-point carrier which might not be there on a sustainable basis," she adds.

For his part, Heiko Reitz, vice president of network management and airport relations at Eurowings, sees definite advantages to "joining forces" with Austrian and exchanging ideas, but the two carriers need to maintain their independence.

"There is an overlap definitely, but there is also separate business models that we pursue," he says.

One of EasyJet's first reactions to the new environment was to pull out of its new Milan Malpensa route from Vienna during the year.

Bence Szabo, head of network at EasyJet, told Routes delegates in Hannover that the UK budget carrier had initially viewed the "Austrian-only" route to Malpensa as looking like a "very healthy" opportunity.

"We launched it and then everything went off in Vienna and suddenly you had Wizz, Level and Eurowings, plus Laudamotion, on the route," he recalls. "We just went: 'Wow, what happened there? From a monopoly to five airlines?' So we pulled out."

Szabo hints that EasyJet was preoccupied elsewhere in Europe last year as it sought to digest the former Air Berlin assets acquired at Berlin Tegel and continued to participate in the privatisation of Alitalia until early in 2019.

All the indications suggest that the vicious competition at Vienna is likely to continue unabated for some time. EasyJet and Wizz are powerful competitors, while the other low-cost protagonists are backed by large parent groups with huge resources to devote to the struggle.

Neumann suggests that the chances of an airline pulling out of the market completely are remote. But who will come out on top?

"They are in different situations because Lauda with Ryanair as an owner has the advantage of the market power of Ryanair and booking machines at Ryanair – they just switch on and they sell," she says.

Lauda has "more or less" entered markets which its predecessor Nikl specialised in – leisure routes and city shuttles.

"For Level, I think it was a little bit more tricky with their background. It's an Austrian company, it has a brand which is actually known for long haul, the booking is happening via the Vueling brand, so that is a bit more tricky," Neumann adds.

Wizz has done a "great job" in differentiating itself from the competition by developing a "balanced" network that draws on the carrier's strength in eastern Europe, while also including western European destinations.

While Vienna's catchment is largely made up of Austrians, Neumann says Wizz is well known among Czechs, Slovakians and Hungarians, bestowing a clear advantage.

As regards EasyJet, she believes the carrier needs to "figure out now what they are going to do in Vienna. I think at the moment they are kind of observing what everyone is doing and trying to work out what would be the best position for them."

Ultimately the struggle will be about who can come out as number two at the airport after Austrian, she says.

While the high-profile moves by low-cost carriers at Vienna have grabbed the headlines, a crucial legal ruling earlier this year was just significant, if not more so, for the airport.

In March, Austria's federal administrative court threw out a legal challenge – based on environmental and noise-pollution grounds – against the building of a third runway at Vienna.

The ruling brought to an end years of litigation around the planned runway, which has proven controversial with environmental groups and local residents.

Neumann says that, following the ruling, Vienna is now hoping to have the new runway completed by 2030 at a cost of €1.5 billion ($1.7 billion).

She says the gateway now has to "do its homework" and produce detailed financial studies and other assessment reports in order to deliver the new runway.

While Vienna is not particularly slot-constrained at present, with some capacity available even during the peak morning periods, a new runway is necessary "if you commit to growth", she says.

As carriers decide to base ever more aircraft at Vienna, the need to develop more infrastructure is growing.

The airport plans to spend a further €2.5 billion on upgrades, excluding the third runway, up to 2028. Those include renovation of Terminal 2 and Pier East, and the development of "airport city" real-estate projects such as a recently-opened office block and health centre.

It's clear that Vienna intends to sustain its momentum in growing traffic and its airline customer base.