Capacity between Indonesia and Japan is set to decline over the second half of this year, reversing a decade of growth.

Cirium schedules data shows that the overall seat capacity between the two countries nearly doubled over a 10-year period, in line with a similar increase in frequency. Average seat capacity, however, has remained static – indicating that carriers are not upgauging aircraft. 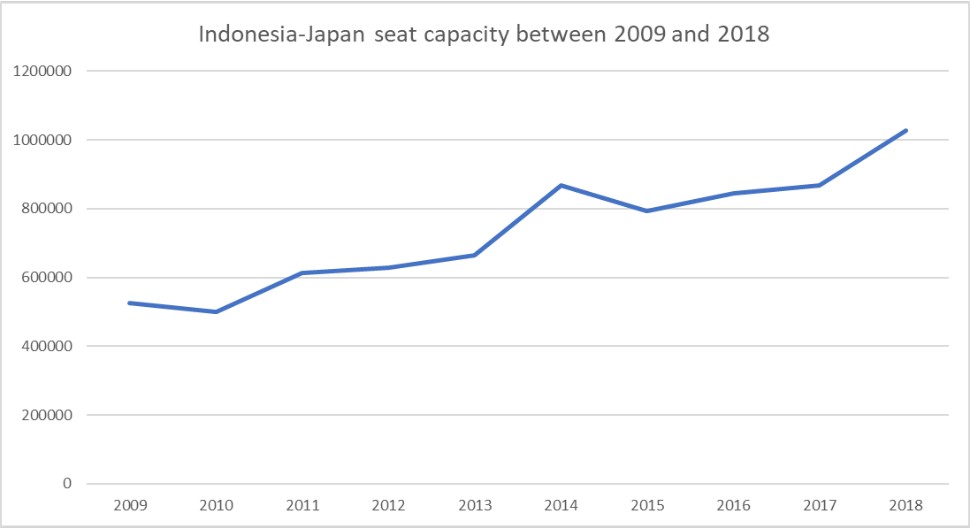 Low-cost operator Indonesia AirAsia X (IAAX) operated flights to Japan in 2017 and 2018, but losses forced it to cease scheduled flights and become a charter operator.

The decade of growth in the market has been driven by strong tourism and trade fundamentals between Indonesia and Japan until recently.

Data from Indonesia's trade ministry shows that while total trade value with Japan fell from $40.1 billion in 2014 to a low of $29 billion in 2016, the numbers quickly recovered in 2017 and 2018, thanks to an increase in non-oil and gas imports from Japan.

The number of Japanese tourists to Indonesia fell by 21% to 32,400 in 2018, statistics from Indonesia's tourism ministry show. But the number of Indonesian visitors heading up to Japan during the year increased by nearly 13% to 396,900, data from JTB Tourism Reseach & Consulting indicates.

This month, Garuda is the largest carrier in terms of frequency and seat capacity offered, operating four daily services from Jakarta and Denpasar. This is followed by ANA and JAL, respectively operating three daily and twice daily Tokyo-Jakarta services.

Capacity between Indonesia and Japan in June 2019

Back then, Garuda only flew from Denpasar to Nagoya, Osaka and Tokyo. Garuda began Jakarta-Tokyo flights in August 2010.

JALways used to operate Tokyo-Denpasar and Tokyo-Jakarta services before being subsumed into the parent company in December 2010. Since then, JAL has dropped Tokyo-Denpasar flights.

Sensing market opportunities in Japan, Garuda Indonesia entered its first Japanese codeshare with ANA in March 2014. That was followed by a similar deal with JAL that started in October 2018.

Interestingly, Garuda chose to maintain its relationship with ANA, with the Indonesian airline telling FlightGlobal that Japan has a strong demand growth potential to warrant it having codeshares with the two Japanese carriers.

However, the codeshare with JAL is far more extensive, and covers services to the USA – a market that Garuda has signalled it would like to fly to in future. 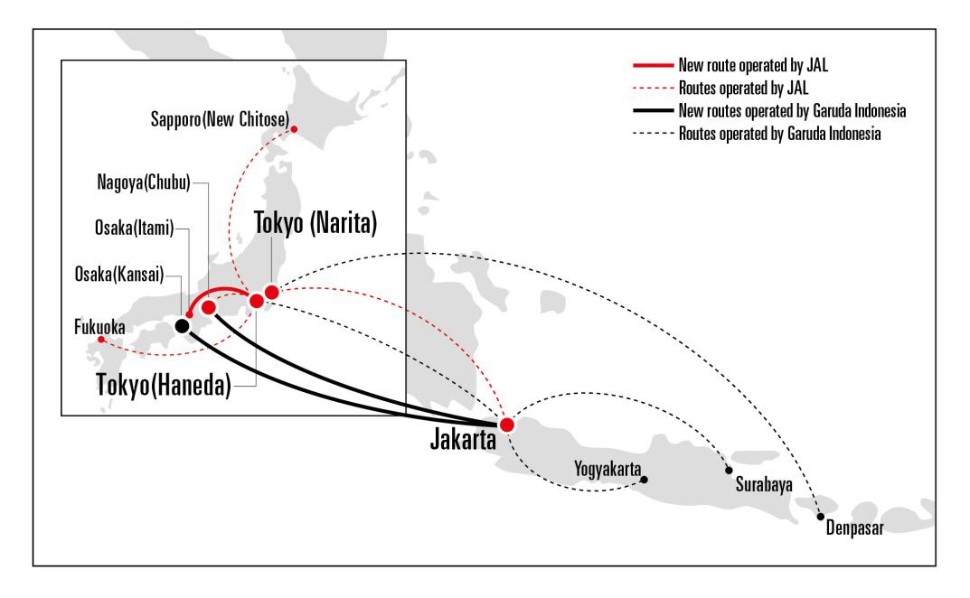 Earlier this year, Garuda and JAL agreed to an expanded codeshare partnership. The Japanese carrier also indicated that it wants to pursue a much deeper relationship with Garuda, with a "joint business structure" being the key goal.

Cirium schedules data suggests that capacity for the second half of 2019 will fall by 24%, which appears to be due to the departure of Indonesia AirAsia X from scheduled operations, as well as capacity reductions from ANA and JAL.

Garuda's capacity is set for a minor decrease, but ANA will cut capacity by nearly 17%, and JAL by 5%.

The greatest impact seems to be the loss of IAAX and the lack of other carriers back filling its capacity. In the case of Garuda, it is focused on returning to profitability, then network expansion, while ANA and JAL continue to focus their energies elsewhere. Other Indonesian operators such as Batik Air, Lion Air and Sriwijaya Air lack the aircraft to fly nonstop into Japan.

IAAX's departure from the market could also be an indication that the price-sensitive traveller sector has not been sufficient for the carrier to operate profitably. AirAsia X group chief executive Nadda Buranasiri in November 2018 cited the "challenging operational environment in Indonesia, primarily due to the series of natural disasters that occurred in proximity to Bali" for its decision to end scheduled operations.

But another factor may be that competitors in Singapore and Malaysia are funnelling passengers between the countries through their hubs. In part, that may reflect that those carriers have more extensive network coverage in both countries. Cirium schedules data shows that Kuala Lumpur is connected to 16 points in Indonesia and four in Japan, while Singapore has flights to 13 destinations in Indonesia and six in Japan.

Despite the possible seat number reductions, Indonesia is keen to secure additional traffic rights for Garuda.

The country's minister for energy and mineral resources, Ignasius Jonan sought support from the former Japanese prime minister Yasuo Fukuda, in his capacity as president of Japan-Indonesia Association, for increased rights and evening departure slots from Tokyo.

"We hope that Garuda will be able to secure evening slots from Tokyo, as the daytime flights often see a lower number of passengers," says Jonan.

Whether the more attractive timing can reverse the turning tide, however, remains to be seen.