United Airlines begins offering its new premium-economy cabin on some long-haul routes tomorrow, its latest step in offering a broader array of products to passengers.

The Chicago-based Star Alliance carrier will offer Premium Plus cabins and service, an offering slotted between economy and business classes, on 15 routes from its Newark, San Francisco and Washington Dulles hubs from 30 March. The product will be available on 21 routes by end-May.

Premium Plus is installed on 42 aircraft - though not all are in service - including Boeing 767-300ERs, Boeing 777-200s and -300ERs, and all Boeing 787-10s, United's website shows. However, passengers may have already flown in the seats, which have been sold as extra-legroom economy seats since first installed on aircraft last July.

The roll out also includes United's first scheduled 787-10 service to Europe from Newark. It introduced the aircraft on transcontinental domestic routes in January.

“We’re excited to get our passengers flying it," says Nocella of Premium Plus, which in addition to wider seats and extra legroom includes a distinct meal service and other amenities. 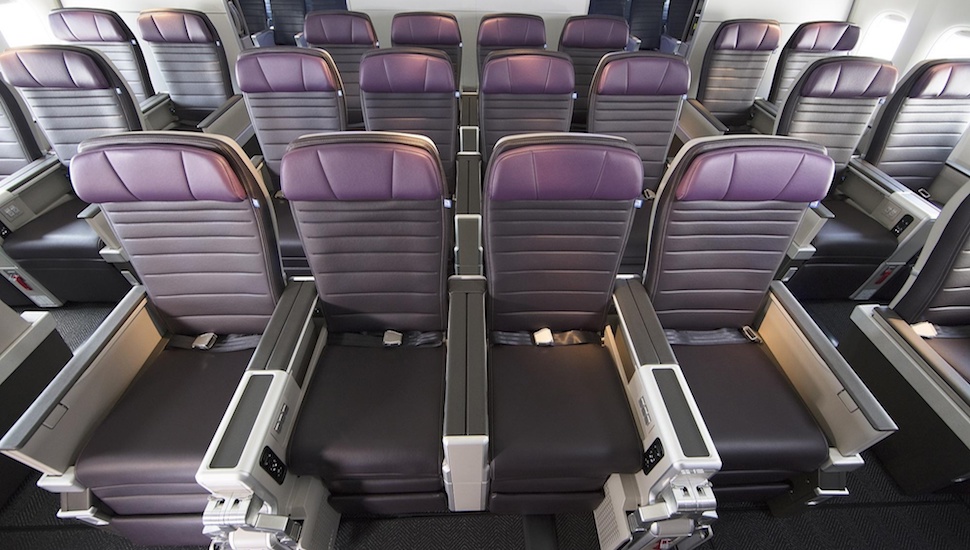 American Airlines introduced a premium-economy product in 2016 – though the offering was not sold as a distinct cabin until May 2017 – and Delta Air Lines at the end of 2017, though neither has fully rolled out the offering to all their widebody aircraft.

United aims to offer Premium Plus on the majority of its 186 widebody aircraft by end-2020.

Wall Street is supportive of the investment. Airlines risk "leaving money on the table" when they do not offer a product between economy and business classes, forcing some passengers to buy down to economy, says Savanthi Syth, airlines equity analyst at Raymond James.

Premium-economy cabins are common on most foreign carriers, including United's joint venture partners All Nippon Airways (ANA) and Lufthansa.

"Businesses, if they tighten their belt, would buy premium economy and in the upcycles people are going to buy up from economy," says Syth. "It’s a lot more resilient to the cycle.”

The debut of Premium Plus is the latest in United's segmentation initiatives. The programme also includes the Polaris business-class cabin and no-frills basic-economy fares that were both first introduced in February 2017.

Premium-economy seats are only a piece of a larger premium push by United. In February, it announced plans to introduce a dual-class 50-seat aircraft, a re-certified Bombardier CRJ700 called the CRJ550, add more domestic first-class seats to its Airbus A320-family fleet and introduce 21 767-300ERs with an expanded business-class cabin in key business markets.

“Our hubs [are] in the biggest business centres in the United States, but we had aircraft that were not configured to maximise the opportunity in New York or San Francisco or Chicago," says Nocella of the latest premium push.

For example, United's A319s were flying in what Nocella called a leisure-oriented configuration in business markets, prompting the decision to add four more first-class seats, for 12 total.

All of these moves, from Premium Plus to the premium-heavy 767s, are designed to benefit the carrier's bottom line while offering passengers more options, as Syth puts it, without leaving money on the table.

"We need to make sure the product and services we offer, and the aircraft we fly, match [demand]… so that we can close the margin gap," says Nocella.