United Airlines wants to be the commercial aviation leader on sustainability, pushing forward on everything from regular use of biofuels to various onboard initiatives.

United took these commitments a step further demonstrating its various sustainability initiatives on flight UA310 to Los Angeles from Chicago O'Hare today. It claims the flight, operated with a Boeing 737-900ER, is the "most eco-friendly commercial flight" ever using a biofuel blend, producing zero-cabin waste and carbon offsetting. 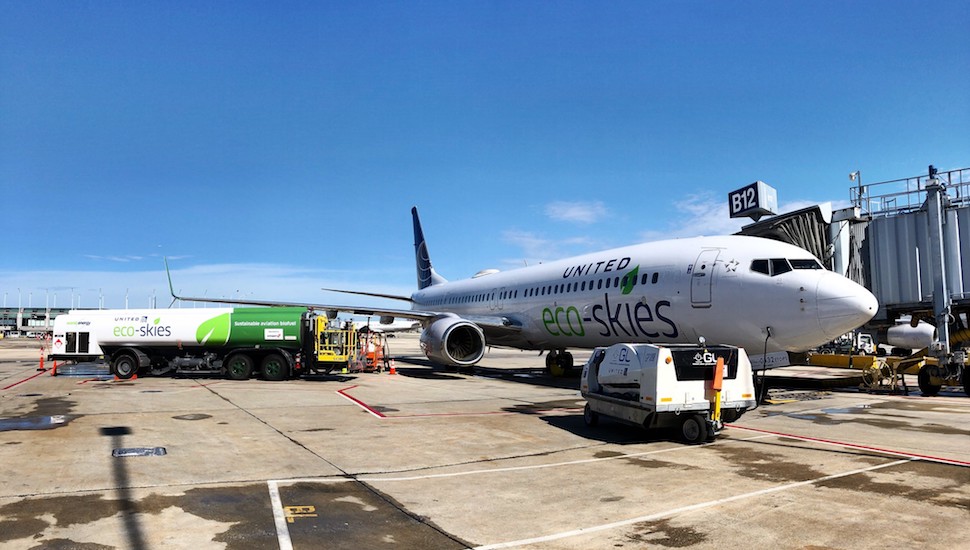 Scott Kirby, president of United, told reporters ahead of the event in Chicago that the initiatives are about creating a "sustainable future" for the airline. And, while everything from reducing single-use plastics to using compostable china onboard flights is important, the greatest environmental gains will come from reducing fuel usage.

"The area that's going to have the most significant impact on the environment is likely on the fuel side," he says.

United has used biofuel from World Energy, formerly AltAir, on flights from its Los Angeles hub since 2016 with the alternative fuels meeting about half-a-percent of its fuel needs at the airport last year, the carrier's senior manager of environmental strategy and sustainability Aaron Robinson says at the event.

The airline used about one million gallons of biofuel, all from World Energy, in 2018. While more than in past years, it represented just a fraction-of-a-percent of the 4.14 billion gallons of fuel burned during the year.

"It's true that today it's a relatively small percentage, but the way to make it big is to make investments today so that you can scale the business, get it to be cost efficient and get it to a size that it can be meaningful," says Kirby.

United invested $30 million in Fulcrum BioEnergy in 2015 in exchange for a commitment by the company to supply the airline with at least 90 million gallons of biofuel over 10 years beginning in 2017. The supply has yet to begin, says Robinson, citing fundraising challenges due to low-oil prices in the mid-2010s.

"For new technologies, when they're in their infancy like this is, support can be critical to jumpstarting and providing a catalyst to getting to sustainability in terms of the economics," adds Kirby.

Fulcrum plans to break ground on a second refinery in Gary, Indiana, later this year. The facility is expected to supply biofuel to United's Chicago O'Hare hub when it opens.

Bryan Sherbacow, the chief commercial officer of World Energy, tells FlightGlobal that United's willingness to sign contracts for biofuel sends "signals" to investors that the airline industry is behind alternative fuels.

World Energy is investing $350 million in an eight-fold expansion of its Paramount, California, refinery to produce up to 320 million gallons of biofuel annually, he says. Funding that project has not been an issue, he adds citing their contract with United as well as ones with Boeing, Gulfstream and KLM.

Every airline touts some form of sustainability efforts. Alaska Airlines claims the first biofuel blend-powered flight in the USA in 2011, JetBlue Airways has focused on carbon offsets, while Delta Air Lines continues to reduce single-use plastics on its flights with its latest move removing them from premium amenity kits.

"It's an increasingly important issue, but definitely more Europe driven than US driven," says Helane Becker, an analyst at Cowen, on sustainability initiatives.

Other analysts echo this, saying US investors have yet to show much interest in sustainable initiatives like United's biofuel push.

United's biofuels leadership appears to have been a bit of luck partnering with the right supplier at the right time. Like with its still pending Fulcrum deal, other airlines have partnered with biofuel providers, for example Alaska with the Northwest Advanced Renewables Alliance, but none have begun receiving steady supply of the fuels.

"You can't get [biofuel] in size," says Becker.

This has not stopped United from trying. Kirby says the airline wants to increase its supply of the alternative fuels and the percentage of its overall fuel consumption that comes from sustainable sources but, he adds, they cannot make a global climate difference alone.

"This will only work to make this a better planet if our competitors do this as well," he says.