AirAsia X’s recent order rejig for Airbus A330neos to include the A321XLR is a sensible move, one that could open up a wide range of opportunities for the low-cost carrier.

The A330neo order was something of a reduction from the 100 commitments it previously held. Having helped to launch the re-engined variant in 2014 with an order for 50, the carrier gradually raised that to 66. Then, at the 2018 Farnborough air show, an order for an additional 34 units was announced, only for the carrier to later walk back on that statement claiming it was a conditional order.

But less than three months after that order, there were signs that the carrier was rethinking its widebody-only fleet model. In September that year, AirAsia X revealed that it was looking at the A321neo and the LR variant to support future network development and frequency increases on shorter routes.

Subsequently, Airbus launched the A321XLR in June, which is capable of flying up to 4,700nm (8,700km) and carrying up to 270 passengers, and AirAsia X signed its order in August. It plans to take delivery of its first of the type in 2023.

“The A321XLR is a perfect partner for our A330neos, assisting to manage capacity during off-peak seasons when demand is lower and for operating thinner routes to some underserved secondary cities,” the airline said.

Markets AirAsia X could serve using A321XLR, based on the maximum range of 4,700nm

Curiously, the A321LR’s range covers most of the carrier’s existing routes. Cirium schedules data indicates that, even if the usable range of the A321XLR is reduced to around 4000nm in an all-economy configuration, almost all of the routes it operates today can be covered – even its Osaka-Honolulu route.

The narrowbodies also give AirAsia X an option for opening new hubs, either through its existing operations, or for launching new ventures. In the case of Malaysia AirAsia X, that could mean a new operation from Kota Kinabalu to complement its Kuala Lumpur home base, and AirAsia’s east Malaysian hub.

While the A321XLRs are a major change for AirAsia X, the large backlog of A330-900s shows that it is not backing away from operating widebodies, as it has since its inception in 2007.

Today, the core Malaysian operation and Thai AirAsia X operate 34 A330-300s between them, while the Thai unit is also operating two A330-900s leased from Avolon. Its Indonesian associate, Indonesia AirAsia X, also operates two A330-300s. But as it recently moved to focus on solely charter operations, its future looks uncertain.

With 78 committed orders for A330-900s in its books, not only will the group replace its A330-300s fleet and pick up the efficiency benefits, but major growth has been built into its future plans – potentially with the addition of new offshoots, perhaps in India or Japan.

Before that, though, there are major challenges that the two core units are facing. Malaysia AirAsia X has put a freeze on fleet growth as it tries to overcome its recent losses, while the previously profitable Thai AirAsia X turned in a loss during the second quarter as it added new aircraft and launched new routes.

Signs are that the A330-900s, at least in the short-term, will be focused on helping to stem losses across the AirAsia X Group, with growth to come later on.

“By swapping our existing A330ceo with the newer [and] more fuel efficient A330neo, which provides approximately 11% additional fuel savings and coupled with more competitive lease rates, we will be poised to further drive up our yields,” said AirAsia X Group chief executive Nadda Buranasiri when releasing the airline’s second quarter results, where it reported a fourfold increase in its net loss to MYR207 million ($49.4 million).

AirAsia X has also talked up the possibility of using the 251t variant of the A330-900 to return to the European market. However it is unclear when that will become available, and many question the viability of low-cost services on 12-14 hour sectors.

AirAsia X and AirAsia, while sharing common branding, are separate companies – but the move of the longhaul carrier into narrowbody operations should lead to questions about merging the two companies together.

After all, both carriers will end up operating a combined fleet of nearly 400 Airbus narrowbodies, and use the same shared services for bookings, customer support and a host of other functions. The two carrier groups also frequently transfer passengers between them at their shared hubs in Kuala Lumpur and Bangkok. 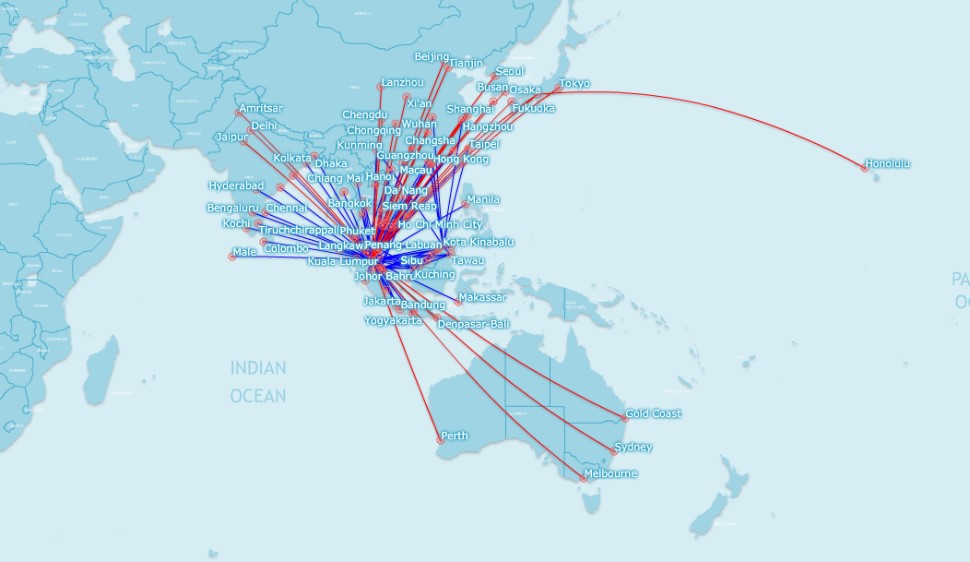 The groups also cooperate on network planning, with some routes moving between the two groups at different times, such as the Kuala Lumpur-Male route. AirAsia X’s flagged move onto some short-haul routes, including Kuala Lumpur-Singapore, that will see it directly overlap with AirAsia.

There is also a strong precedent for combining long- and short-haul operations in the region. In 2017 Singapore Airlines merged its two low-cost carriers under the Scoot brand, and in Australia Jetstar started its long-haul operation in 2006 from its existing short-haul unit. Cebu Pacific Air also has an integrated widebody and narrowbody operation.

One compelling proposition that could lead to a merger lies in AirAsia X’s share price. Its share price closed on 24 September at a new low of MYR0.17 ($0.04), nearly half of the MYR0.32 peak last seen on 29 January. Buying out the airline and taking it private at the current trading price would only cost AirAsia around MYR705 million ($168 million), slightly more than the price of three A320neos. Given the strong emphasis for the two airlines on working together, integration costs are likely to be few, and the expected synergies significant.

But if past comments by Tony Fernandes are any indication, it does not look likely any time soon.

“AirAsia’s position is very clear, the board has never discussed this and there is no merger at all,” said Fernandes in a May 2017 The Edge Malaysia report.

“The whole purpose of setting up AirAsia X as a separate company, is because we believe it should be separated, and 10 years on we still believe that.”

More immediately, however, it seems that AirAsia X needs to prioritise returning to profit before it turns its attention to the major growth opportunities its aircraft orders can open up.