Take a stroll to the Aviation Partners stand at booth 3047 and see a working model of exactly how much fuel is consumed globally per hour. The company estimates that its blended winglets save 250,000USgal (950,000 liters) a day and will reduce worldwide fuel consumption by 770,000USgal over the three days of NBAA 2005. The winglets have already saved corporate and commercial operators over 210 million USgal. 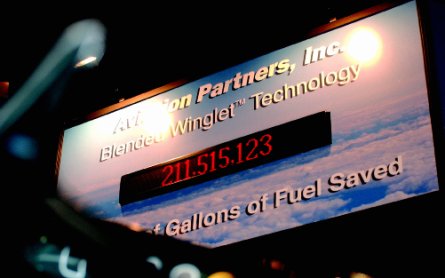 With 900 aircraft using the winglets and a further 550 shipsets to be installed by year-end, the world’s airways have become significantly more fuel-efficient. Blended winglets are saving next generation Boeing 737-800/700 operators more than 100,000USgal of fuel per year per aircraft.

“Fuel costs are an airline’s second highest expense, after labor, and prices for jet fuel are the highest they’ve been in three decades,” says Aviation Partners Boeing chairman Joe Clark. “Upgrading to blended winglets is the most effective approach an operator can take to reduce operating costs and ‘hedge’ on the cost of fuel. Our technology has saved over 210 million USgal of jet fuel to date; it will save an additional 110 million USgal plus next year and more than 150 million USgal in 2007. Assuming we deliver approximately 400 shipsets per year for the rest of the decade, our technology will save 1.2 billion USgal of jet fuel between 2001 and 2010.”

Hawker 800 and 800XP operators that upgrade to blended winglet-equipped 800SPs and 800XP2s at a cost of $395,000 and $425,000 respectively, enjoy fuel savings of up to 7%. Says senior vice-president of marketing Dick Friel, “That’s the equivalent of getting one free tank of fuel for every 15 fill-ups. The best news is that these fuel saving and performance enhancement benefits last for the entire economic life of the aircraft.”