Denver International airport plans to add 39 gates to its three concourses over the next five years, as it works to manage rapid passenger traffic growth and airline ambitions. 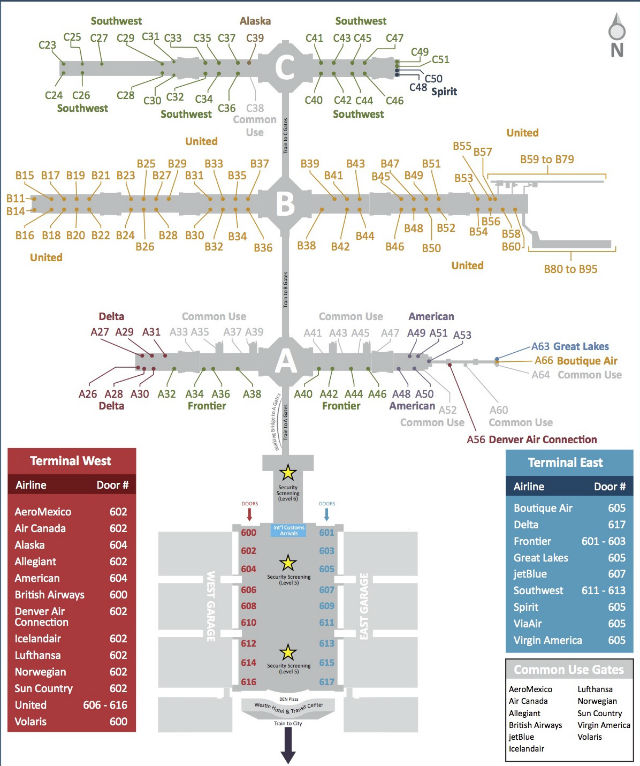 The new gates will increase the airport's total to 146 from 107 today.

Denver has seen traffic boom in recent years. Passenger numbers were up 7.1% year-to-date to 41.1 million in August, airport data shows. This comes after the airport set a new annual record of 58.3 million passengers in 2016, making it the sixth busiest in the USA.

United Airlines is the largest carrier at Denver with a 42.2% share of passenger traffic year-to-date in August, the data shows. Southwest Airlines is the second largest with a 29.4% share and Frontier Airlines third with an 11.7% share.

Discussions with airlines over use of the new gates are underway, a Denver airport spokesman says.

However, the additional gates in concourse B will likely be used by United and those in concourse C by primarily Southwest as the airport has worked in recent years to consolidate individual airline operations – except for international flights – in a single concourse.

"I have lots of plans putting even more airplanes through [Denver] in the future," United president Scott Kirby told employees in January. He added that he saw the "most growth opportunities" at the airport from among the airline's seven hubs.

United was evaluating what additional facilities it would need for further growth, he said at the time.

The airline has focused on increasing connecting traffic over Denver this year. Numerous routes were shifted to larger gauge aircraft in June and new service to Columbia, Missouri, began in August.

Since then, United Express partner SkyWest Airlines has won US government contracts to connect six more cities – Liberal in Kansas, Moab and Vernal in Utah, North Platte and Scottsbluff in Nebraska, and Pueblo in Colorado – to Denver.

United is scheduled to increase seats 5.3% at Denver this year over 2016, FlightGlobal schedules show. Flights will be roughly flat.

Frontier and Southwest are also growing in Denver, with the former planning to add 21 new routes from the airport through the spring of 2018. This year, Frontier seats are scheduled to decrease 1.3% year-over-year and Southwest seats up 4.7%, while flights are down 6.4% and up 4.2%, respectively, schedule data shows.

The Denver City Council must vote on the $1.5 billion in advisory and construction contracts for the airport's planned expansion, the first meeting on which is scheduled for 1 November.

The airport plans to issue bonds to finance the works in 2018, the spokesman says.

The concourse expansion plans come after the airport signed a $1.8 billion concession agreement to renovate the airport terminal in August. Frontier, Southwest and United, as well as other carriers, opposed the contract citing concerns with rising passenger costs.

Frontier and Southwest decline to comment on the concourse expansion. United was not immediately available to comment.