Whether the gradual transformation apparent in the ancient and conservative kingdom of Saudi Arabia is driven by altruism, or a grudging recognition that a semblance of change is the price of international acceptance, is still a contentious matter.

But for flag-carrier Saudia's chief executive Jaan Albrecht, who spoke to Airline Business at a Munich conference, the revamp of the national airline is no simple spit-and-polish exercise. This behemoth of an operator has been long-tethered to the traditions and values of its homeland, not necessarily to its benefit. Saudia has a culture ingrained by decades of government ownership and past subsidy, says Albrecht, for which profitability has not been a priority.

"This drastic change happening in the country also has to be shown as a drastic change in the way we do business in the company," he states. "To change everybody's – each and every employee’s – mind." 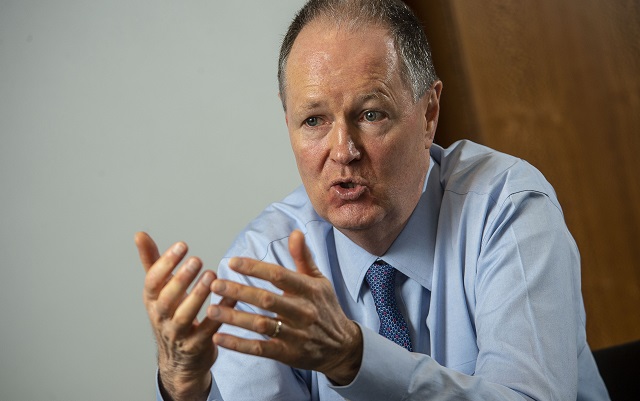 Saudia is a "sleeping giant" and the "perfect example of a legacy airline", he says, and needs to undergo a thorough modernisation involving virtually every aspect of its operation if it is to become a competitive, customer-centric carrier, in line with the government’s Vision 2030 programme – a strategy to reduce the kingdom’s dependency on oil and turn it into an investment powerhouse and trade hub connecting Europe, Asia and Africa.

Its overhaul comprises a blend of long-term strategic initiatives, with timeframes of four or five years, and measures which can be quickly implemented.

"I'd say the ‘quick wins’ have more or less been exhausted," says Albrecht. "Things about which we were just dragging our feet, things that happened in the rest of industry some years ago [with which] we have now caught up."

Combined, these smaller gains "mean a lot" to the airline’s bottom line, he says, but the crucial strategic changes will be the "tough nuts to crack". Three years into the transformation programme, despite substantial progress, Saudia is not yet profitable.

Cutting costs has meant a reduction in administrative headcount, by around 4% per year, but Albrecht says this has been mainly achieved by retirements and leaving vacancies unfilled. Fleet expansion, in contrast, has prompted Saudia to hire on the operational side and total staff levels are likely to stay flat to 2020.

The airline is building towards a 200-aircraft fleet within the next two years. Around 80 have been introduced since the start of 2016, among them Boeing 777-300ERs and 787-9s as well as 20 regional-variant Airbus A330-300s, for which Saudia was launch customer.

This demand for 21st century aviation technology is being driven by a strategic pillar inextricably tied to 1,400 years of faith and dedication centred on a unique Saudi facet: the cities of Mecca and Medina, the two holiest sites of Islam, to which Muslims worldwide stream for the Hajj or Umrah pilgrimage.

Saudi Arabia is the founding land of Islam, the world’s second-largest religion. This means the pilgrimage traffic “belongs” to the kingdom, claims Albrecht, and Saudia needs to use this advantage, as the national airline of the country with the two holy mosques, and capitalise on its non-stop links to Jeddah. 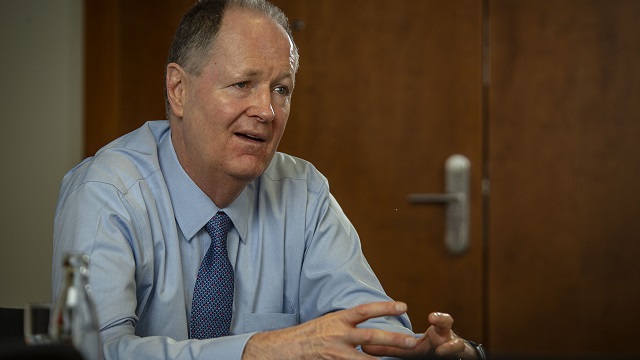 Over the last two years, he says, the carrier has increased its market share of this traffic by 12 points, and the government has worked to ease the visa process in support of its development.

“We need to make this pilgrim experience as enjoyable, as easy, for customers as we can,” he adds. “You see pilgrims who might be 80-90 years old, doing the dream of their lives to visit the holy sites, and a non-stop flight with [high-speed train] connectivity between Jeddah airport and Mecca makes this experience much easier, much smoother.

“This is a niche that Saudia definitely has which, I say, has not been fully exploited in the past. But we’ve now made it a key feature of our strategic initiatives.”

Malaysia Airlines has formally launched a dedicated spin-off pilgrimage carrier, Amal, which uses some of its Airbus A380s to shuttle customers from Malaysia, Indonesia and Thailand to Mecca and Medina.

While the Saudi investment company Kingdom Holding had once ordered a VIP-configured A380, Saudia has never used the type and – even before Airbus’s decision to axe the programme – Albrecht had ruled out becoming a customer for the double-deck aircraft.

"There is a huge growth potential but pilgrim traffic is highly concentrated during the Hajj season, only spread out through 70 days, and then with the A380 you’d have issues to fill that capacity through the rest of the year," he says. "The A380 is not under consideration."

But Saudia is interested in using its own fleet to replace wet-leased aircraft including high-density Boeing 747-400s. Albrecht says the carrier uses 18 long-haul jets, in addition to its own, for Hajj and Umrah but wants to move gradually away from wet-leased capacity.

"This is another potential reason for ordering additional aircraft," he says. Saudia would be unlikely to opt for a four-engined type, however, because the operating cost of twin-engined aircraft is "so attractive" in comparison.

Saudi Arabia is the size of Mexico, where Albrecht was raised. It has 27 airports and, as a consequence of the vast distances, air travel is a primary means of transport.

But Saudia’s Jeddah base – which features a dedicated Hajj processing terminal – has been hamstrung by weak infrastructure, which has limited development of connectivity.

After a soft commissioning last year, Jeddah is preparing to open fully a new terminal building by around July-August, which will enable it to reconstruct its schedules and introduce three daily traffic waves.

The current south terminal at Jeddah, located 2km from the north terminal, has eight gates which are served by buses, with no direct airbridge contact. This physically restricts Saudia to eight operations per hour, says Albrecht.

But the new terminal will offer 47 contact gates and the chance to develop a hub at Jeddah, allowing international services to connect with domestic or other international flights.

“We’ll start our wave system with up to 35 operations per hour during peak times, which is a totally different way to operate the airline,” says Albrecht. Saudia will be able to establish a sixth-freedom network, he says. The terminal is critical to enabling Saudia to implement a new schedule and extract value from its revenue-management system, and Albrecht expects to be much closer to profitability after the first 18 months of operation.

"If you look at most, if not all, airlines worldwide, you need a hub, need to protect the home market," he states. "So far Saudia has not been able to benefit from that. Jeddah, as a main home market with this very limited infrastructure, is not helping." 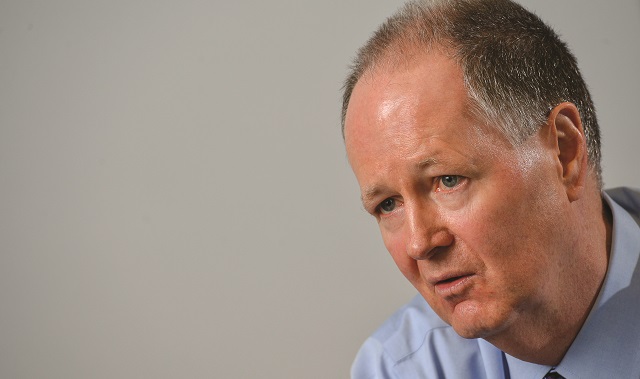 The carrier is running a 75% load factor – "good, but not good enough", says Albrecht. More origin and destination traffic, supported by Vision 2030 business travel and visa simplification, will make up part of the shortfall, but the airline wants to raise its connecting traffic from around 7% to 15-20% through the sixth-freedom capabilities of the new terminal.

"It’s a matter of training, talking to your staff. Sales people in Europe, Asia and the USA for decades were used to selling only Jeddah or Riyadh, the incoming traffic to the kingdom.

"We've trained them, given them the tools to sell the world via Jeddah and Riyadh – and the acceptance of people has been fantastic."

Saudia is not attempting to duplicate the model of neighbouring Gulf carriers Emirates, Etihad Airways and Qatar Airways – the so-called ‘Middle East Three’.

Albrecht stresses that sixth-freedom operations are “not the main topic” of the airline’s strategy, pointing out Saudia’s advantage in having a domestic network – unlike Dubai, Abu Dhabi and Qatar – which will be in demand as a result of huge Vision 2030 investments, such as that of Neom, an ambitious tourism and trade community in the north-west.

“It is not the intention to become the ‘fourth Gulf carrier’. Because, I say, we don’t need this positioning. We have this unique blessing of the two holy mosques’ pilgrim traffic that belongs to Saudia, and we know we are doing better and can still do much better,” he says.

Jeddah’s terminal will support Saudia’s efforts to re-animate its relationship with SkyTeam. Albrecht, who formerly headed Star Alliance, says he realised the carrier was “not really benefiting” from membership.

“An alliance is like a fitness club,” he says. “You pay your entry fee, monthly fee. You want to become fitter, so you have to go to the fitness club.

“I immediately recognised that Saudia was more-or-less in the category of paying the fees... but not really going to the fitness club.

“So the internal feeling was that SkyTeam wasn’t really giving us those expected benefits. But I’d say this was mainly self-inflicted.”

His background at Star enabled Albrecht to tackle Saudia’s alliance lethargy with the benefit of experience.

“We started to participate in the meetings, started to negotiate bilateral deals with our SkyTeam partners,” he says. The carrier also brought in an alliance vice-president.

“I’d say that, today, the perception and benefits we get from SkyTeam are definitely there,” says Albrecht. “Suddenly we see a lot of attention from several SkyTeam carriers which are putting their eyes to Jeddah because of this new possibility for connectivity.”

To enhance this closer relationship, Saudia is concentrating on an end-to-end improvement in product and service, through a programme it calls ‘Top Five’.

Saudia will complement the modernised fleet and terminal infrastructure with new lounges, IFE and catering. But Albrecht says the main element involves training staff and giving them “the tools to offer a world-class service” in both the premium and economy cabins. Saudia has so far implemented the programme on such routes as London, Paris and Madrid.

Saudia is also supplementing its high-end service with low-fare spin-off Flyadeal, which recently opted to expand with 50 Boeing 737 Max jets. Seventy percent of the kingdom’s population is under 30, says Albrecht, and low fares are “very much appealing” to this sector.

The two airlines are strictly separate, he states, and will be allowed to “live their own life”, even though they overlap on certain routes such as Jeddah-Riyadh. 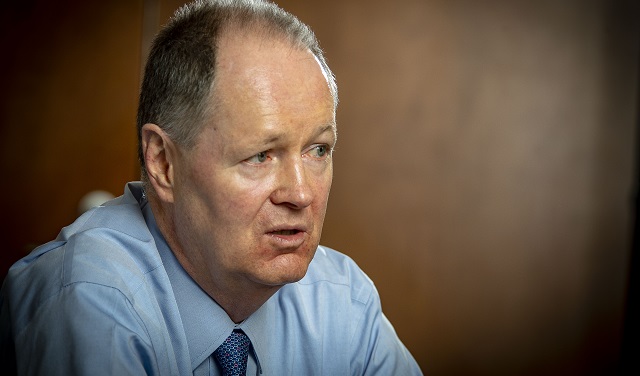 Both airlines are set to benefit from 'Saudisation' schemes, to reduce dependency on expatriates, with local cadets returning to the kingdom after training in global flight academies.

Saudi Arabia's reforms have included axing fare caps and fuel incentives. "We’re paying market prices as anybody else would do," says Albrecht.

He meanwhile insists the strategic plan does not specifically involve privatising the airline, but the government wants it to be attractive, profitable and suitable for such a decision.

Saudi Arabia has recently hosted a new air show and high-profile golf tournament, and its flag-carrier has sponsored a Formula-E motor racing event. If there is an undeniable sense of change inside the kingdom, Saudia wants to ensure it is fit and capable of conveying that message outside.