Singapore Airlines' attempt to take a stake in China Eastern Airlines in 2007 is well documented, but few people are aware that the Star Alliance carrier originally intended to enter that market through a much smaller, private player: Juneyao Airlines.

An MoU had even been signed for SIA to take a 25% stake in the carrier, which was in the midst of applying for an operating permit, Juneyao chairman Wang Junjin recalls. But China Eastern got wind of SIA's plans when Wang declared the matter to the Chinese regulatory authorities, and subsequently approached the Singapore flag carrier for a partnership.

"SIA came and apologised to us because we had already signed an agreement. They told us the situation and we said that it's okay, we can't force it," Wang said in Mandarin during an Airline Business interview at the Juneyao International Plaza in downtown Shanghai – a building owned by the group.

"Now as we look back, SIA must be feeling quite regretful that it didn't invest in Juneyao Airlines," he adds. 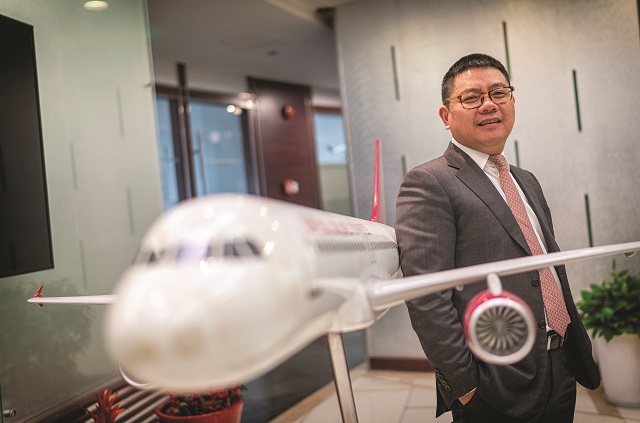 His sense of vindication is understandable. Today, mainline Juneyao operates a fleet of 71 jets, is consistently profitable, and is listed on the Shanghai Stock Exchange. It also has a low-cost arm based in Guangzhou called 9 Air, which flies 18 Boeing 737s. Besides Spring Airlines, it is the other sizeable private carrier in a lucrative Chinese market which is still largely dominated by state-owned airlines.

Having firmly established itself in the Chinese domestic market, the airline last year entered its next stage of growth, expanding internationally with its first widebodies – brand-new Boeing 787-9s.

Wang's aim has always been for Juneyao to become an international airline. This is precisely why he insisted on setting up a base in Shanghai, even when the Civil Aviation Administration of China had urged it to operate out of Hangzhou, since Spring Airlines was already a player in China's financial centre. Standing fast on being headquartered in Shanghai delayed Juneyao's launch for six months.

"This was very important. Our aim is to become an international company and Shanghai is a good harbour," says the bespectacled chief.

"So we're in China, in Shanghai. We have the time. It's only a matter of time before we become a big airline."

The airline will "soon" cross the 100-aircraft mark, with the Airbus A320 family as its core narrowbody fleet and the 787 its only widebody type. Exactly when is hard to say because aircraft inductions still need to be approved by the Chinese regulator. Wang stresses that the ultimate aim is not for Juneyao to grow tremendously in size, but rather to have a strong brand which will last through the generations.

Even though Juneyao started flying only in 2006, it was not a complete newbie. Wang and his two brothers – Junyao and Junhao – started the Juneyao Group in 1991. The same year, it ventured into charter services, operating domestic routes that catered to the business community, initially out of Wenzhou.

"We found it very meaningful. We were building bridges in the sky, providing convenience to the community."

The brothers were, however, quickly frustrated because each time they successfully built a route and turned it profitable, scheduled airlines would take it back for their own operations.

"We kept building and cultivating routes for others, absorbing all the risks and when it's done, they take it back. That's why I said: 'We should start our own airline.' I said this for 10 years and then we managed to set up Jixiang." 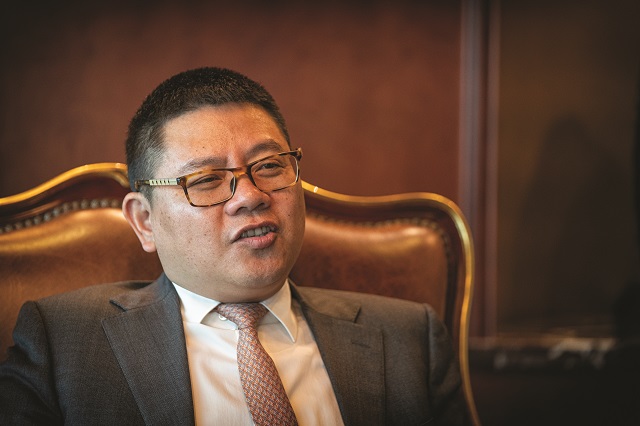 Jixiang, which means auspicious, is the airline's Chinese name and how it is known in the China market. Its official English name is Juneyao Airlines.

Eldest brother Junyao did not live to see the launch of the group's own scheduled airline, as he was taken by stomach cancer in 2004 at just 38 years old. Junjin took over as chairman of the growing conglomerate, with youngest brother Junhao as his deputy.

Today, the Juneyao Group has businesses in five main sectors – aviation, consumer, technology, education and financial services. The listing of the airline business in 2015 also raised 50-year-old Wang and his family to billionaire status. Forbes puts his net worth at $1.1 billion, ranking him 357th on its 2018 China Rich List.

For the airline, the primary focus is expanding internationally. Wang concedes that at present Juneyao still has a relatively low profile outside of China as a result of its limited international network, which spans only 11 points across Japan, South Korea, Thailand, Philippines and Singapore.

Juneyao will launch its first intercontinental service to Helsinki in June, and start services to Melbourne later this year. It is seeking rights to fly to London, Cairo and Vladivostok, all within the year.

While China Eastern has rights to most of the blue-chip international destinations from Shanghai, Wang believes that there are still untapped opportunities.

"From Shanghai, there are still many destinations not yet opened, including points along the Belt and Road Initiative. There are also points in Europe, North America and Africa. But for us, the routes we open must be profitable. This is the most important," he says, adding that the airline is "in no hurry" for more long-haul launches and will not "fly for the sake of flying".

International ambitions were behind its push to become Star Alliance's first connecting partner in 2017. It knows it will need all the help it can get to succeed internationally, and having allies around the globe is important. Bridging Star Alliance's gap in Shanghai is also a "win-win" which will boost traffic on its domestic network. Since joining the alliance, the airline has signed new codeshare agreements with six Star members.

It was Air China that mentored Juneyao through its Star integration process, no doubt motivated by the privately owned carrier’s extensive network in Shanghai, and how the two could possibly join hands to boost the flag carrier's presence at China Eastern's home base.

Juneyao, however, stood its ground from the start and said that it would continue codesharing with SkyTeam's China Eastern even after coming into Star Alliance's fold. The duo got even closer last year, announcing a cross-shareholding partnership where China Eastern will take a 15% stake in Juneyao, and Juneyao a 5% stake in China Eastern.

Wang says Juneyao could eventually take up to 15% of China Eastern, including through share purchases on the secondary market. In future, they could also have directors sit on each other's boards.

Together, the duo would effectively have a 50% share of the market out of Shanghai, Cirium schedules data shows. China Eastern holds 29.5% of all seats out of the city, followed by its wholly owned subsidiary Shanghai Airlines (12.2%), while Juneyao is the third-largest player, accounting for 8.6% of seats.

"What we want is to have many friends and few enemies," says the self-made businessman. He rationalises that the tie-up with China Eastern can help Juneyao raise efficiency by sharing resources in areas such as maintenance. As it plans new international routes, it would also consider China Eastern's frequencies and timings to provide passengers with more options. It does not hurt that the collaboration is also in line with the government's push for more co-operation between state-owned and private capital.

Airline Business asked if Air China had taken a dim view of Juneyao's cosy relationship with China Eastern. Wang says plainly that Air China's position as flag carrier means it will be difficult to deepen the partnership with Juneyao.

"Of course Air China doesn't wish for us to get closer to China Eastern, but they can't object either. We still codeshare a lot with Air China," he says, adding that the leaders of the big three carriers were all present at a recent event and there was no awkwardness.

"Air China should understand from my standpoint. If it was in my position, it would do the same."

He adds: "We don't exclude Air China and Star Alliance, and we also embrace China Eastern. What we want is many, many friends." 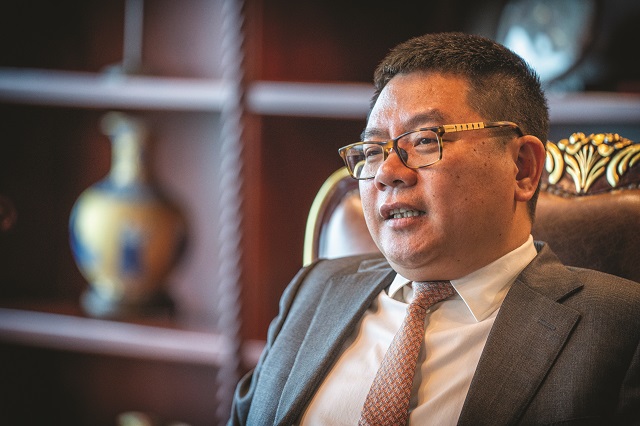 Wang is open to having more strategic investors come on board, although it does not have much shareholding to sell since Wang wants to retain at least 40% of the airline. It also has its own management systems and style in place, and is more selective about partners compared with the early days when it was just starting out.

A big part of Juneyao's strategy is to position itself as a "high-value carrier". This, it says, means focusing on high efficiency and quality to bring value to passengers. Key to this is having an uncomplicated young fleet, systems in place to ensure good workflow, and an optimised route network.

Wang says that Juneyao's aircraft utilisation is generally 10% higher than other carriers', and that it is top of its class when it comes to on-time performance. Although it is not a budget carrier, it taps some LCC concepts to manage costs. Wang is convinced that doing these well means it will create a differentiated airline that will survive even when the going gets tough.

"As long as our quality is good, efficiency is good. Safety, customer service, branding, on-time performance, all these things which passengers appreciate, we do well in. We will be a big player eventually."

To up its game, the airline has also invested significantly in its 787 fleet, a key element of its international expansion. It already has three of the type in service, with three more to arrive this year, and another four in 2020.

These widebodies are fitted with 29 full-flat seats from Thompson Aero Seating in a 1-2-1 configuration in business class. The economy section meanwhile has Recaro seats in a 3-3-3 layout.

Time and money have clearly been put into the 787 cabin, from the seat selection and its peach colour tone, to the meals offered. Business-class passengers get to pick their meals from a Chinese/English menu – something not always available on Chinese legacy carriers – while it also offers a selection of alcoholic beverages.

"We want to give a warm feeling to our passengers from when they enter the cabin, such that it's not just about flying on a plane. We looked into the details from the seat to the colour. With the hardware done, we will upgrade the software," says Wang. He is confident that with a strong product and an expanding international network, the profile of the Juneyao brand will rise accordingly.

Besides the mainline business, Juneyao also wants to continue to grow budget unit 9 Air. Wang is convinced that a dual-hub strategy, based strategically in the key cities of Shanghai and Guangzhou, represents tremendous potential. 9 Air already has a sizeable domestic network, and is also venturing overseas with services to Mandalay and Yangon.

9 Air will build on a second hub in Guiyang, while Juneyao continues to expand its secondary base in Nanjing.

The group has the financial muscle to fund expansions at its two units, having amassed cash from its very successful 2015 initial public offering, as well as the incoming proceeds from China Eastern's investment. Its share price hit the 44% jump limit on its debut on the Shanghai Stock Exchange.

"If you want to grow, your debt ratio and cash are very important. Juneyao has always been richer in funds, so we can walk further.

"We want to be a long-lasting carrier, to have 100 years of Juneyao Airlines," concludes a determined Wang.