The 2016 Flight Fleet Forecast predicts the delivery of 42,800 new passenger and freight commercial aircraft over the next 20 years, worth almost $3 trillion in 2016 delivery values. About 63% of those deliveries – some 26,860 units – are expected to be single-aisle passenger aircraft, representing 46% of the overall delivery value.

Unsurprisingly, given their present market dominance of this sector, Airbus and Boeing are predicted to account for almost 90% of single-aisle deliveries through the forecast. But as Bombardier recently achieved delivery of its first CSeries to launch operator Swiss, cracks in the OEM duo­poly in this market segment are beginning to appear. Bombardier, Irkut and Comac between them are expected to achieve about 3,100 aircraft sales through 2035. 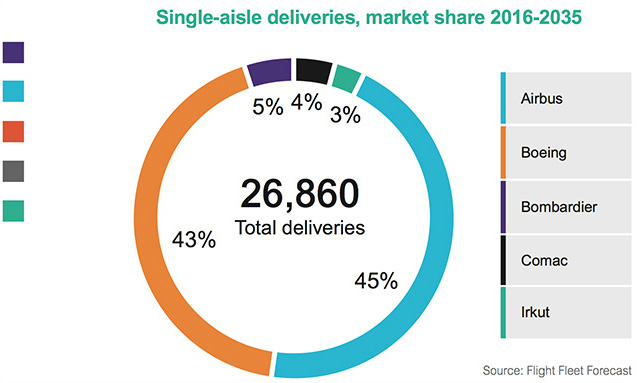 However, the significance of these new market entrants is expected to remain limited. While the CSeries is predicted to achieve deliveries across all eight of the geographical regions considered in the forecast, limited export sales of the emerging Irkut MC-21 and Comac C919 are foreseen.

More than 60% of MC-21 deliveries are expected to be to operators in Russia and the CIS, with C919 deliveries even more concentrated – Chinese operators taking close to 80%.

Both of these programmes may, on paper, offer economic and performance propositions to match the Airbus A320neo and the Boeing 737 Max. However, the challenge of creating global customer support and finance networks to overturn the incumbency enjoyed by Airbus and Boeing is expected to be too great for these OEMs to deliver the holistic product required by airlines globally.

The basic premise of the single-aisle forecast is that Airbus and Boeing retain market dominance in the face of this emerging competition, even if not quite in the form of the duopoly we see today. Their own view of this position is evident as they increase production from today’s 44 and 42 aircraft a month, respectively, to 60 and 57 by the end of 2019.

But the Fleet Forecast signals potential risk in both companies’ rate growth plans. Global passenger traffic is modelled to increase at a compound annual growth rate (CAGR) of 5% through 2035. Growth for the period 2016-2020 is predicted to be above the long-term trend at a CAGR of 5.7%. If this global traffic growth is achieved, the current traffic expansion cycle, which began in 2010, will have lasted 11 years and yielded a CAGR of 6.4%. 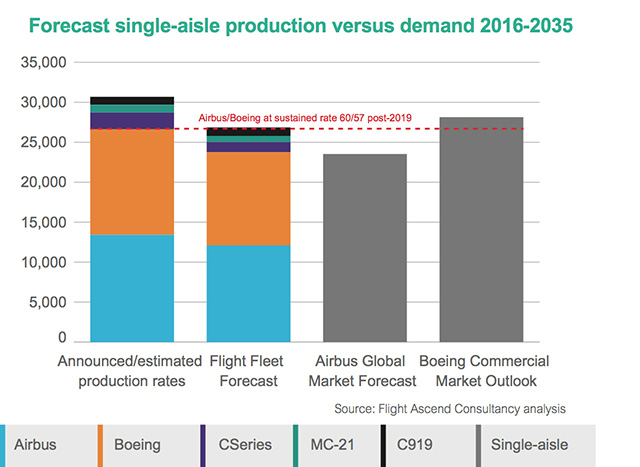 With potential signs of softening demand beginning to emerge in some of FlightGlobal’s cycle metrics in 2016, the risk that the cycle will not endure at the required level of growth for another five years appears high, as does the risk inherent in Airbus’s and Boeing’s rate-growth plans.

The Fleet Forecast projects that Airbus and Boeing will increase deliveries to 55 and 50 aircraft a month, respectively, by 2019. In other words, under our base-case scenario, 60 and 57 appear to be increases too far.

However, the manufacturers hold record single-aisle backlogs, and are highly incentivised to increase production. Thus, there appears to be a high probability that both will press ahead with these rate increases and deliver more aircraft than is justified by our demand and supply analysis. If this happens, our prediction of 2,230 single-aisle retirements over the next five years may be conservative. The consequence would be that potentially many mid-life and older aircraft are prematurely removed from service to offset surplus aircraft rolling off the Airbus and Boeing production lines.

The final thought in this regard should be left to the OEMs’ own forecasts. Airbus and Boeing published new outlooks at the Farnborough air show in July, predicting demand for 23,531 and 28,140 passenger single-aisle aircraft, respectively, through 2035. As Airbus and Boeing achieve and then sustain a production rate of 60 and 57 aircraft a month post-2019, single-aisle output from these two lines alone through 2035 would be around 26,620 aircraft. It seems these increases are not justified by their own observations of long-term demand trends.

A summary of the Flight Fleet Forecast is available here; to find out more about the forecast and how to order it, email info@flightglobal.com