If a picture is worth a thousand words, a photo of the IATA board of governors from June 2018 probably said it all about gender diversity at the top tiers of airlines. Flybe chief executive Christine Ourmieres-Widener, seated at the far right of the photo, stood out as the only woman among the pool of two dozen men in suits and ties.

As one of only two women on the IATA board – Air Europa chief executive Maria Jose Hidalgo Gutierrez was not in the photo – Ourmieres-Widener is one among a rare breed in the airline industry: the female chief executive.

Some appointments since then, including Air France's naming of Anne Rigail at its new chief executive in December, perhaps hint at change in the air. But the paltry number of women in the group that governs the airline industry's main association is a reminder, on International Women's Day, of the stark gender inequality at the upper echelons of airlines.

"I am very proud to be one of the only two women on the IATA board. But at the same time I shouldn't be proud of being one of only two women," Ourmieres-Widener tells FlightGlobal. "It should be more than that, it should represent the society. Airlines are providing services to the world." 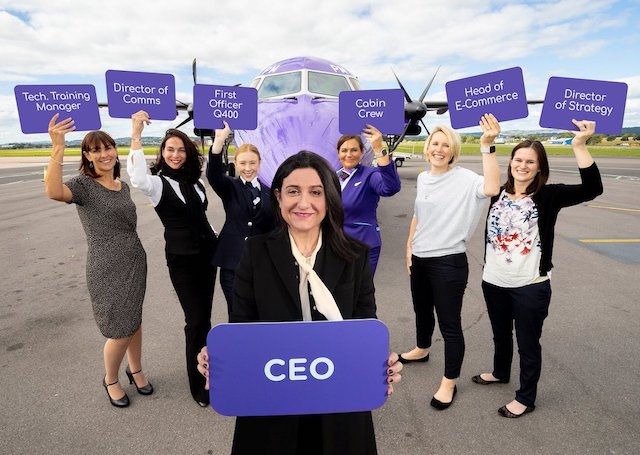 Ourmieres-Widener's resume makes her one of the more experienced chief executives in an industry that has struggled to retain women at the top. Before joining Flybe in 2017, she was chief executive of Irish regional carrier CityJet from 2010 to 2015.

In recent years, high-profile female airline chiefs like EasyJet's Carolyn McCall and Jetstar Group's Jayne Hrdlicka have left the sector to lead companies in other industries. A FlightGlobal survey in 2018 found that only two airlines out of the world's top 100 carriers by revenue were led by women.

While observers have suggested that the lack of female airline leaders is due to women being deeply under-represented at airlines in general, employment data has challenged this view. For example, data from the US Bureau of Labor Statistics show that almost 43% of employees in the air transportation sector are women. But that does not mean gender divides do not exist in roles in the airline industry. For one, pilots in the US commercial airline sector are still overwhelmingly male.

Ourmieres-Widener says gender stereotypes around women's interests and capabilities in the airline industry are pervasive, and are easily observable in interactions between men and women.

"Many men in the industry assume that if you are a woman, you don't really know about technical subjects," says Ourmieres-Widener, who has a master's degree in astronautics and began her career in the maintenance department of Air France. "They will try to find other things to talk about with you that are not technical in nature."

Double standards in how the behaviour of men and women are perceived also make it challenging for women to progress in the workplace, she points out. "I'm somebody who is very direct… Some men see that as a negative trait," she says. "If it is a woman [behaving that way], the reaction is different. People will say: 'She's not a team player, she's too individualistic.' If it's a guy, they will say: 'Wow, he's very competitive and full of energy and drive.'"

Since becoming chief executive at Flybe, Ourmieres-Widener has overseen efforts to promote gender diversity at the carrier. About half of the airline's senior managers are women, with more than half of those women being appointed in the last two years. The airline also launched FlyShe, an initiative promoting the aviation industry to women.

While some airlines have committed to hiring more female pilots and engineers, Ourmieres-Widener says that waiting around for a new generation of pilots and engineers is not enough. There is also a need to boost the number of women on airline management teams and boards, she adds.

"Improvements in diversity at different grades is what we want to see," she says. "If you start building momentum with pilots, engineers, executive committees and boards, you will get traction."

She encourages airlines to re-examine policies to allow more flexibility in the workplace, such as accommodating working mothers who might need to work from home on some days. "When you have good talent, working from the home or office doesn't make a difference," says Ourmieres-Widener. "We are trying to find solutions so that when we identify talent, we want to make sure we keep them."

As a female airline chief who has not shied away from highlighting the gender imbalance among the industry's senior executives, Ourmieres-Widener is all too aware that not everyone appreciates her message.

"Each time we talk about it, people say: 'Oh my God, she's talking about diversity again!' My husband always tells me: 'Don't listen to the haters, you do what you have to do,'" says Ourmieres-Widener with a laugh.

Despite the detractors, she believes it is part of her duty to speak out, even if that makes her one of the few persistent voices drawing attention to the gender divide in airline management teams.

"I have to use that to make a change," she says. "I think we can change more quickly than people think. It's part of what we have to do, for the female colleagues and friends who are ready for the job."