A NATO-observed trial took place over Pratica di Mare air base, near Rome, during which Finmeccanica’s Mode 5 reverse-IFF system was integrated on board Tranche 1 aircraft. It simulated interrogating Italian army vehicles for friendly signal emissions which, once verified, ensured the fighter held off from firing at allied forces.

IFF systems are typically used to verify the threat from other aircraft by sending out an interrogation signal and requesting the pilot respond. The reversed system interrogates ground forces, and is named as such because it uses the transponder usually employed to reply to interrogations to scan the ground for threats.

Finmeccanica says NATO is considering the system as a short- to mid-term solution for air-to-surface identification of friendly forces, so the demonstration was observed by the Alliance's Battlefield Combat Identification Capability Team.

Integration and test work was supported by Finmeccanica as part of the air force’s experimental flight test centre at Pratica di Mare.

“The integration solution developed by Finmeccanica has shown that it is possible to introduce such a significant capability in a simple, low-impact fashion using the aircraft’s existing transponder,” the company says. 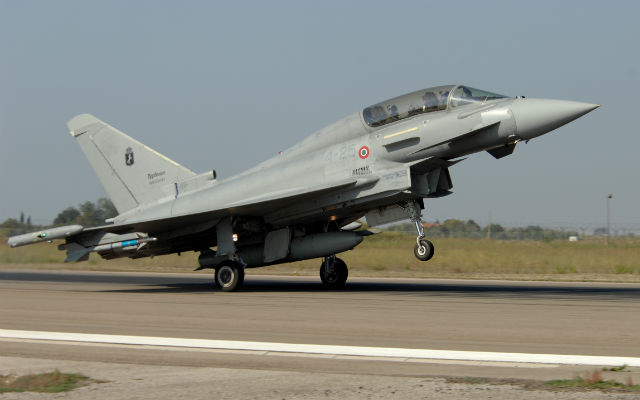 Finmeccanica’s Mode 5 IFF technology has been adopted by NATO as the standard for new military platforms and will be mandatory across the Alliance from 2020.

In February, it was also announced that Saab Gripen NGs destined for Sweden and Brazil will benefit from the IFF system, under a 96-unit order to be delivered over a five-year period from 2017.