Despite rumours of a possible retirement, reassurances in President Donald Trump’s proposed fiscal year 2018 budget and ongoing upgrades have given Boeing’s F-15 line a new lease on life.

Rather than stepping away from the F-15, Boeing is doubling down on the fighter with a slew of upgrades, including conformal fuel tanks, improved longerons and a next generation integrated defensive electronic countermeasures system. After the fighter line’s production appeared to be slowing down, Boeing’s foreign prospects for the F-15 now appear hopeful. Saudi Arabia is on track to procure 84 aircraft through 2019 and another undisclosed customer in the Middle East is looking to buy up to 72 F-15s through 2022, Steve Parker, vice-president of F-15 programmes at Boeing, told reporters in St Louis, Missouri this May.

Boeing is even mulling a new name for the revamped F-15 as a symbolic departure from the legacy Eagle pedigree, Parker says.

“We should have looked at renaming that aircraft a long time ago, that’s something we’re looking at from a Boeing perspective,” Parker says. “What we’ve created today, the outer mould line is the same, everything else has changed. It looks the same, we’ve got conformal tanks, but it is a different aircraft today. When we talk to current and prospective customers there’s that realisation.” 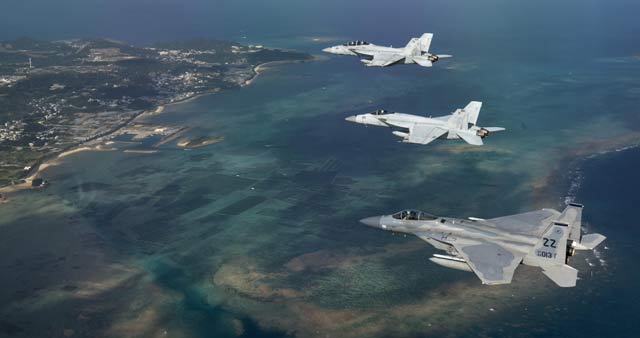 Boeing will add conformal fuel tanks to the US Air National Guard’s F-15Cs, which perform homeland security missions to the four corners of the country. The recent $29.3 million contract award from the NATO Support & Procurement Agency (NSPA) will cover the initial integration and test of conformal fuel tanks (CFTs) for the Air National Guard’s F-15s, a 4 May Boeing press release states. The contract also covers options to purchase additional CFTs for the entire US Air Force and Air National Guard fleets of F-15C/D aircraft. The CFTs will extend the aging Eagle’s combat radius and loiter time for the guard’s air-superiority and homeland-defence missions.

The CFTs are one of many upgrades providing insurance to the F-15 line. In March, the director of the Air National Guard entertained the possibility of retiring the F-15C/Ds and replacing them with Lockheed Martin F-16s. But Trump’s FY2018 budget request did not outline plans for F-15C divestment and included a new service life-extension programme (SLEP) for the aircraft’s longerons. The proposed $7 million SLEP allows the F-15C/D fleet to meet its planned service life within acceptable risk margins, according to budget documents.

Parker also counters that switching from the F-15 to F-16 would incur significant maintenance costs. Besides the additional CFTs, the Trump budget would support ongoing upgrades, including $57 million for an infrared search and track (IRST) and $16.7 million for upgrades to the platform's Raytheon APG-63(V)3 radar. The F-15 already has IRST capability today, but Boeing recently completed a competition for the USAF to select the next generation IRST, Parker says. Boeing finished a fly-off last month for the competition and will make a decision on the next IRST in the coming months, he adds.

A 12 May notice on the Federal Business Opportunities website also outlines a sole-source award to Boeing for an F-15 C/D wing replacement programme that would produce an F-15E variant prototype wing for the legacy aircraft. In an email to FlightGlobal, Boeing clarified that the company is using a newly engineered wing, rather than the former “E” wing on the F-15C/D aircraft. The new wing has a higher fatigue life and supports additional weapons stations, a Boeing spokesman says. Any additional weight on the aircraft would be negligible, according to Parker.

“Boeing has re-engineered the wing for the Advanced F-15 and that is being used for current aircraft in production and going out to customers,” the Boeing spokesman says. “Any additional customers would receive the newly engineered wing sets that were re-designed using state-of-the-art manufacturing techniques.” 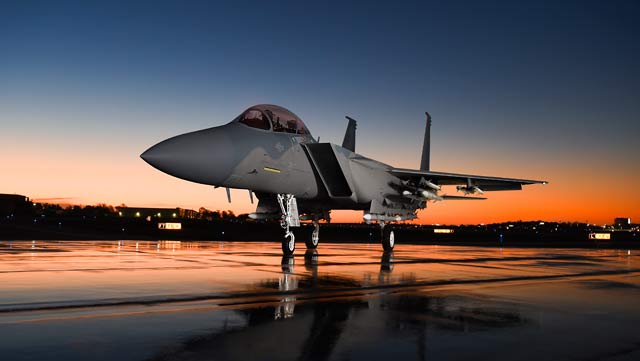 Parker maintains the F-15C will not face retirement until the air force’s penetrating counter air (PCA) platform, the service’s next standoff aircraft to address air superiority gaps, comes online. The president’s recent budget request boosted funding for the next generation air dominance effort, but USAF officials have said PCA would not reach initial operational capability until the mid- to late-2020s.

Parker doesn’t believe the advanced Eagle would serve as a candidate for the future fighter contest, noting that the US government is looking at a different type of platform. Still, he hints that technology developed on the F-15 allows Boeing to change the aircraft’s outer mould line very easily. When asked whether Boeing’s PCA pitch would include the same Advanced Eagle capabilities with a different outer mould line, Parker demurred.

“We have a lot of space and a lot of power available, so things like Talon HATE, we can do lots of things much more quickly than other fifth gen aircraft,” he says. “But I think PCA is going to be different from a wrapper perspective.”