Lockheed Martin has unveiled its proposal for the US Navy’s Broad Area Maritime Surveillance (BAMS) unmanned air system requirement. The Mariner is a growth version of the General Atomics Aeronautical Systems Predator B UAV, with a larger wing providing increased endurance.

Lockheed is competing against Boeing, with a derivative of the Gulfstream G550 business jet, and Northrop Grumman, with the Global Hawk, for the BAMS development contract to be awarded by the end of September.

The Mariner has the same fuselage, avionics, flight controls and 1,000shp (745kW) Honeywell TPE331-10T turboprop engine as the Predator B, but a bigger wing and tail to support an increased take-off weight including additional fuel. 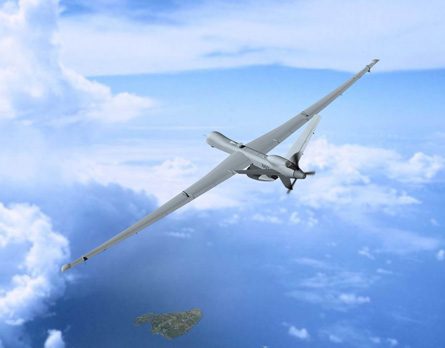 Wing span is increased to 26.8m (88ft), from the Predator B’s 19.5m, with the wingtip fairings housing radars for the detect, see and avoid system that will allow the UAV to operate in civil airspace.

Take-off gross weight is increased to 5,900kg (13,000lb), from 4,080kg for the Predator B, with an additional 910kg of fuel housed in the extended inboard leading edges of the wing.

The electro-optical/infrared (EO/IR) sensor under the nose is made retractable, to reduce drag, and the Mariner has a maximum speed of 230kt (425km/h), maximum altitude of 50,000ft and endurance of 48h.

Internal payload is 610kg, with 360kg of growth capacity, says Chuck Martello, senior business development manager. Up to 1,810kg can be carried externally on six hardpoints, although BAMS is not planned to carry weapons, he says.

The Mariner will carry a 360º-scan maritime multi-mode radar, supplied by EDO, as well as a FLIR Systems EO/IR sensor, electronic support measures, and wideband and a narrowband line-of-sight and satellite datalinks.

Martello says the UAV will have enhanced icing and lightning protection, as well as automatic take-off and landing capability.

The US Navy’s requirement for the BAMS system is to maintain a continuous orbit 3,700km (2,000nm) from the operating base, with five orbits required to support fleets deployed around the world.

Each orbit has to be maintained with three or fewer air vehicles aloft at the same time: one on station, one en route to take over and one returning to base. Martello expects this to require about five Mariners per system.

Initial operational capability of the BAMS is planned for 2014, with the UAV operating as an adjunct to the US Navy’s Boeing P-8A Poseidon multi-mission maritime aircraft.