A Regional Express Saab 340B has landed safely at Sydney airport after its right-hand propeller came off whilst operating a flight from Albury.

Pictures on social media show the aircraft, registered VH-NRX, on the ground at Sydney on 17 March, missing the whole propeller assembly on its right-hand General Electric CT7 turboprop engine. 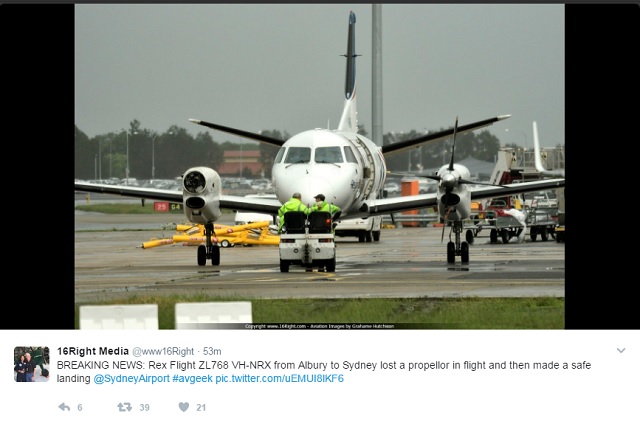 Reports indicate that the aircraft was around 10nm from Sydney when the propeller sheared off, forcing the crew to declare a 'pan' before landing at Sydney.

Rex confirms that "an event associated with the aircraft's right propeller assembly" occurred during the flight, and the crew "followed standard operating procedures and the aircraft landed normally and on-time at Sydney airport."

The operators also confims that there were 16 passengers on board and three crew members who were met by ground staff upon arrival but did not require further assistance.

Rex is continuing to investigate the incident, and has notified the Australian Transport Safety Bureau (ATSB) and the Civil Aviation Safety Authority of the occurrence.

The ATSB says in its own statement that it is "deploying a team of three investigators with expertise in materials failure engineering, recorded flight data analysis, and human factors."

It has also called on members of the public in the Sydney area to contact it or police if they find any suspected debris from the aircraft.

Flight Fleets Analyzer shows that the aircraft was built in 1992, and has been operated by Rex since 2004. It was purchased off-lease by the carrier in 2008.