Belgium-based technology company AWx has sold its patented flight simulation motion modifier – known as Lm2 – to the US Air Force to equip its Boeing KC-135 simulator training organisation at Scott AFB in Illinois. 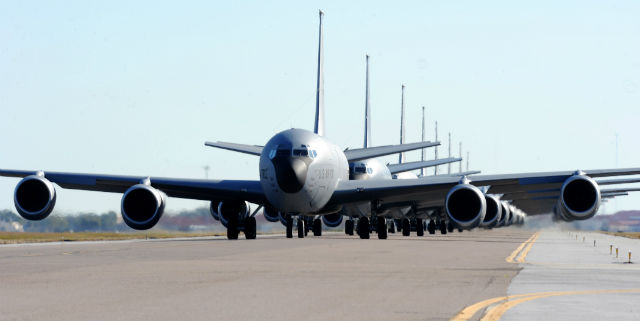 The order was placed in May under an agreement between AWx, the USAF and the Tampa, Florida-based US branch of Canadian simulation company CAE, but has only just been announced. It will result in 19 of the service's operational flight trainers (known as full flight simulators to non-military customers) being equipped with Lm2 lateral motion modifiers.

Lm2 can be fitted to any full-motion simulator, according to AWx managing director Filip Van Biervliet, and makes manual handling, especially for complex stick-and-rudder tasks like crosswind landings, feel so realistic that such landings can be accurately trained in the simulator.

A previous customer, Cathay Pacific Airways, purchased Lm2 for just such training across almost all its types, and AWx's recent launch customer in the USA was Atlas Air, which used it to upgrade the motion systems on its Boeing 747-400F simulators. Atlas's vice-president flight operations Capt Jeff Carlson commented following trials: "Manual flight proficiency is the ultimate human factor in the safe operation of all aircraft. Lm2 allows instructors to observe and train pilots with a much higher degree of efficiency as well as realism."

Lm2 is a patented software solution that modifies the conventional lateral accelerations applied by six-axis motion systems in full flight simulators – which frequently cause trainees to overreact, resulting in pilot-induced oscillations. AWx is a short form for Acceleration Worx; the company was originally known as Sabena Flight Academy Development.