The US Air Force has delegated to Boeing the task of selecting a supplier for a $198 million upgrade of the F-15C/D that will enable the twin-engined fighter to detect at long range the heat generated by an aircraft engine.

The proposed acquisition of 133 infrared search and track (IRST) sensors, including 100 for active duty squadrons, 25 for the Air National Guard and eight test assets, follows the delegation approach the USAF also used to upgrade the radars on the F-15E.

By delegating the selection of the sensor pod, the USAF avoids giving losing bidders a chance to protest Boeing’s decision to the US Government Accountability Office (GAO).

After selecting the IRST pod supplier, Boeing will be tasked with integrating the pod with the F-15’s other systems, including the Raytheon-supplied active electronically scanned array (AESA) radar, the USAF says in an acquisition notice dated 10 October.

An IRST sensor — essentially, a gimballed, infrared telescope — is a common feature on the latest Western European and Russian fighter models, and is gaining popularity on US-made fighters.

In contrast with a transmitting radar, an IRST does not actively emit energy as it scans for targets. That makes such sensors useful for maintaining situational awareness in cases where the radar must be turned off to avoid detection. 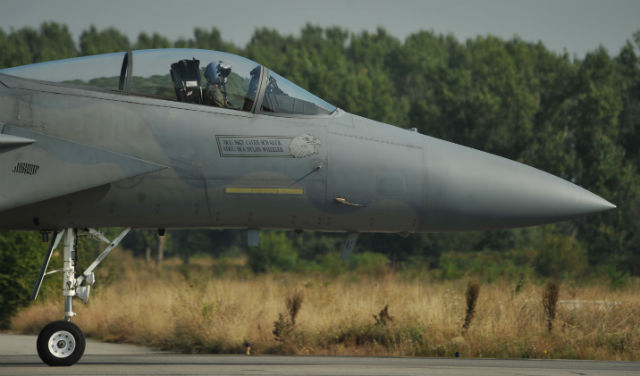 In budget documents released last February, the USAF justified the estimated cost of giving the F-15 a sensor to detect infrared radiation. Such a sensor scans “a large volume of airspace [and] fills gaps left by other sensors”, the document says. The IRST also “complements the radar to enhance survivability and lethality against air-to-air threats”.

Boeing is likely to have several options to evaluate. Saudi Arabia equipped its new fleet of Boeing F-15SA fighters with the Lockheed Martin AAS-42 IRST. Lockheed is now offering a version of that IRST to the USAF as the “Legion Pod”. Northrop Grumman has developed the “Open Pod” for integration on the F-15.

Meanwhile, Boeing Phantom Works developed an IRST sensor for the USAF's Talon HATE pod. Boeing delivered several Talon HATE pods to the USAF F-15 fleet, but the IRST was a sideline interest. The main point of Talon HATE is to allow the F-15 to communicate with the intra-flight data link on the Lockheed Martin F-22, which otherwise is unable to share data with non-stealthy aircraft.

The IRST sensor is one of several upgrades planned for the USAF’s F-15s, which are now expected to remain in service until 2040, or more than 60 years after the F-15A entered service. In addition to radar and communications upgrades, the USAF also is installing BAE Systems’ Eagle Passive Active Warning Survivability System (EPAWSS), which gives the F-15 the ability to tracing radar signals to a location that can then be targeted.

Last June, the USAF also started flight tests of a new advanced display core processor, an enabling technology in the cockpit that supports the flood of information generated by the upgraded radar, IRST and EPAWSS.