The Wuhan Coronavirus outbreak in China comes after years of strong traffic growth from Wuhan Tianhe International airport, which serves dozens of domestic and international destinations.

Media reports about the outbreak indicate that reported cases have risen to over 440 with nine fatalities being recorded. The virus, which is in the same family as the Severe Acute Respiratory Syndrome (SARS) virus that struck in 2003, is apparently capable of spreading through - as the Chinese government puts it - “respiratory transmission” contact between people. 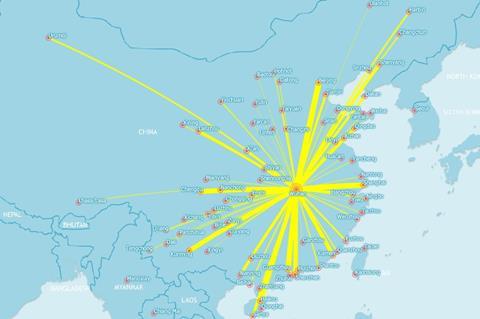 After facing demands from crew, Cathay Pacific will allow crew to wear face masks on China services. Singapore is conducting temperature checks on all passengers arriving from China, and a case has been reported as far away as Seattle. Some airlines are offering passengers with tickets to Wuhan the chance to change or cancel for free.

A key difference between 2003 and 2020 is, of course, the massive growth in China’s air connectivity, both domestically and internationally. Wuhan, the city of 19 million that is the epicentre of the outbreak, is emblematic of this growth.

The airport’s key markets are namely domestic such as Beijing (111 flights weekly), Chengdu (93), Guangzhou (84), and Haikou (83), and dozens of other major cities.

The city’s international long-haul network, however, is not as well developed. Still, there are direct services to San Francisco (13 flights monthly), Dubai (17), and New York City (14). In addition, the airport offers direct connections to European cities such as Istanbul, London, Moscow, Paris, and Rome.

A portion of the travellers on the major hub airlines are likely to transfer for long-haul international routes. 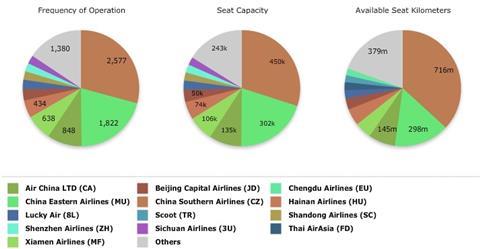 Outbound capacity from Wuhan by airline.

If the SARS crisis of 2003 is any guide, then airlines will be in for a rough ride.

The Cathay Pacific 2003 annual report opened with these lines: “In 2003 Cathay Pacific’s operations were severely disrupted by the SARS outbreak, which resulted in a steep decline in passenger demand and several months of heavy losses.”

Eventually the SARS epidemic was contained and air traffic returned to normal.  That said, it is far from certain how the Wuhan outbreak will play out. Airline chief executives will be watching events very closely.