On 4 November, the world’s shortest Airbus A380 flight took off – as Singapore Airlines (SIA) operated the superjumbo on its Singapore-Kuala Lumpur route.

While the A380 was to operate for only about a month, the occasion highlighted the return of the aircraft to SIA operations, as the airline cautiously restored capacity after the bruising impact of the coronavirus pandemic. 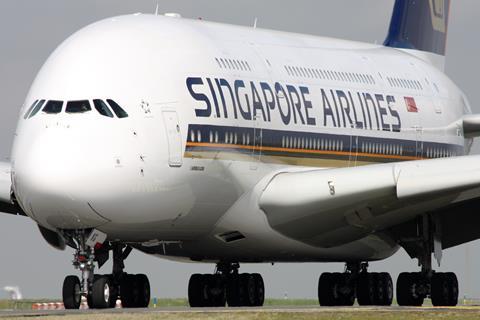 Singapore Airlines still seems to be optimistic about its A380 fleet

SIA’s A380 would later operate flights to London, amid a spike in demand for the city-state’s quarantine-free Vaccinated Travel Lane flights, followed by flights to Sydney, as Australia reopened its borders.

Around the same time SIA brought its A380s back from storage, Australian flag carrier Qantas announced its first A380 was returning to Sydney after spending nearly 600 days parked overseas.

The aircraft, which is named after one of Qantas’s founders, Hudson Fysh, landed in Sydney on 9 November. It is one of the two A380s to return to service in April 2022 on two key routes to Los Angeles and London.

Like SIA, Qantas says it has seen strong demand for international flights as travel restrictions ease. It disclosed that it was accelerating the return of the superjumbos, with six to resume flying by end-2022, and a remaining four jets by 2024.

The A380s, says the airline, will have their cabin products refreshed, indicating that the aircraft could operate for some more years to come.

Before the global pandemic, SIA, too, upgraded the cabin products on a number of A380s.

Yet, Qantas and SIA are likely to be the exceptions to the norm in their optimism about their A380 fleets, at least among Asia-Pacific operators.

The A380, once the flagship of an airline fleet, is facing diverging realities in the Asia-Pacific, as airlines begin their long-drawn-out path to recovery.

Amid the coronavirus pandemic, when capacity-cutting was the norm, these superjumbos sat idle for months on end. As the hopes for a quick recovery dimmed further, industry watchers questioned the fate of these aircraft and wondered if – and when – they would ever return to the skies.

For many other operators, the answer was clear: the aircraft offered way too much capacity. As Malaysia Airlines chief Izham Ismail told FlightGlobal: “The aircraft were good at the time the decision was made.”

At the time of writing, the airline was still in the middle of a tender process to sell its six superjumbos. Likewise, Thai Airways, which is undergoing a business rehabilitation process, is hoping to dispose of its fleet of A380s.

Korean Air, meanwhile, intends to retire its 10 A380s “within five years”, airline chief Walter Cho told FlightGlobal. Compatriot Asiana Airlines, which will soon merge with Korean, has six A380s in storage, and these aircraft are also likely to be retired early.

The sole Chinese operator of the A380, China Southern Airlines, has been coy about the future of its five examples. However, media reports last April indicate the airline – the only carrier to fly the A380 during the pandemic – was “reviewing” its A380s’ future, though the prospects are far from bright.

Even SIA, which has brought back a number of A380s into service, most recently scrapped two examples in Singapore.

As fleet rationalisation becomes the norm in the new year, expect the already-rare A380 to be an even rarer breed. A cautious approach to capacity management, coupled with concerns about new coronavirus variants killing travel demand, means the A380’s glory days are all but a thing of the past.