The latest data from IATA shows how far China is lagging the recovery being seen in other markets around the world, as government policy continues to limit international and domestic travel.

Describing the Chinese market’s performance in September as “dismal”, IATA director general Willie Walsh said on 7 November: “Even with economic and geopolitical uncertainties, the demand for air transport continues to recover ground.

“The outlier is still China with its pursuit of a zero-Covid strategy keeping borders largely closed and creating a demand rollercoaster ride for its domestic market, with September being down 46.4% on the previous year.”

On a similar theme, the director general of the Association of Asia Pacific Airlines (AAPA) Subhas Menon said on 10 November: “China hasn’t come to the party yet.” 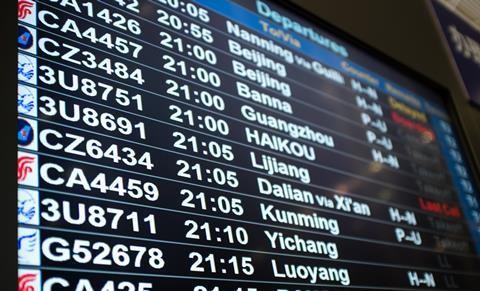 The other large domestic markets in Asia-Pacific are continuing their strong recoveries, IATA data shows, with Australia, India and Japan all recording significant year-on-year rises in traffic – measured in revenue passenger kilometres – in September.

The strongest performance was seen in the USA, where domestic traffic was some 0.4% above pre-Covid levels during the month, while Brazil’s September traffic was just 4% lower than that seen in 2019, IATA data suggests.

China’s domestic market had been down by much less in August, at 38% versus the same month in 2019, and previously exceeded pre-crisis levels earlier in the pandemic, reflecting the aforementioned “demand rollercoaster”. The fall during September came amid fresh Covid-related lockdowns in the country.

“Given the significance of the China domestic market, travel policies in the country continue to impact global figures,” IATA states, as it put global domestic demand at 81% of pre-crisis levels in September, versus 86% in August.

In international markets, traffic at Asia-Pacific’s airlines was down 59% in September, against a global average deficit of 30%, despite huge year-on-year RPK increases in region. Every other region bettered that average figure, IATA data shows, reflecting the drag the large Asia-Pacific market is having on global figures – partly thanks to the region’s later exit from Covid restrictions, but also due to the lack of travel in and out of China.

North American airlines were the best performers in international markets in September, with their traffic down just 11% on 2019, followed by Middle Eastern operators with a 17% deficit.

Across all markets – domestic and international – global traffic was at 73.8% of 2019 levels in September. Demand has been around that figure for three months now, reflecting a degree of ‘normalisation’. That follows months of demand expansion against 2019 levels earlier this year, prompted by the dropping of travel restrictions around the world.