News this week that American Airlines has joined United Airlines in signing up for Boom’s Overture jets has reignited the debate about whether supersonic flight has a role to play in the modern commercial air transport sector.

The theoretical competitive advantages of such aircraft are obvious.

That is partly because of the BAC Aerospatiale Concorde’s chequered but often revered history, which featured political wrangling and dubious operating economics, alongside vastly reduced journey times and a level of passenger awe that is arguably absent from commercial air travel today.

More pressingly, some question how airlines can commit to the Overture, given it is yet to see an engine manufacturer formally identified – and given that the project still has billions of dollars of expense ahead in terms of design, certification and production.

The design changes announced at the recent Farnborough air show, including the number of engines on each jet being doubled, further provides ammunition to those who doubt Boom’s ambitious timeline for service entry in early 2029. 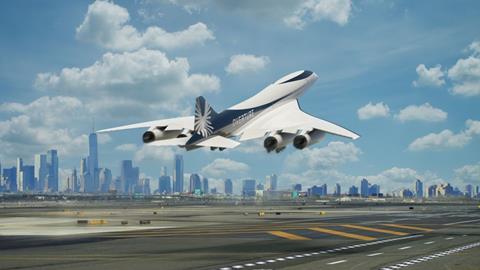 But it is on the issue of sustainability that most of the debate on the future of supersonic travel focuses.

United Airlines chief sustainability officer Lauren Riley recently told FlightGlobal that “our commitment is to make sure we do it with sustainability at the core”, with Overture designed to run on 100% sustainable aviation fuel (SAF).

That fuel burn will be crucial, because even if Overture is 100% powered by SAF, the airline industry is likely decades away from seeing SAF production reach that point where anyone could be frivolous with its use.

Under IATA’s base-case timeline for the industry reaching net-zero CO2 emissions, for example, SAF production hits only 65% of the total fuel requirement, by 2050.

And that is presuming that SAF delivers on its its promise of game-changing emissions reductions.

Ultimately, one thing is for sure: Boom and its early partners – which also include Virgin Group and Japan Airlines with “pre-orders”, and Northrop Grumman for a military version – are well aware of the challenges that must be overcome.