Glacial progress on the implementation of the Single European Sky initiative over the past two decades means the potential operational efficiencies from ATM reform remain something of a holy grail for the industry amid continued political deadlock. 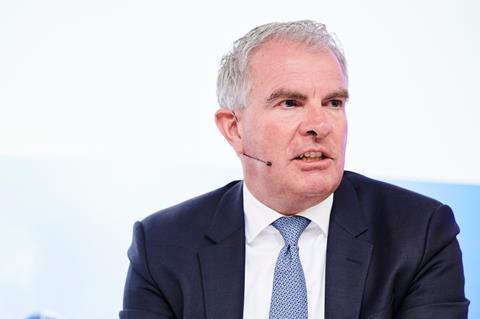 A4E chair Carsten Spohr: We can have connectivity and affordable air travel in Europe – and at the same time reduce the environmental impact

Speaking during an interview at the recent A4E Aviation Summit in Brussels, Spohr – who this year chairs the airline trade group for a second time – again highlighted the potential gains Single European Sky could yield, but acknowledged a change of tack in the industry’s messaging is needed.

“So far we used two arguments to put pressure on [for] single European skies. One argument is it costs us money. The other argument is it costs our passengers’, guests’ time. Apparently those two currencies, money and time, didn’t work, otherwise we wouldn’t be where we are.

“Now there is a new currency in town, CO2, and that currency probably has a stronger impact. So unfortunately, let’s not talk about time and money anymore when it comes to the upsides of the Single European Sky. Let’s just talk about the CO2 impact it has.”

He points to the efforts pilots make to optimise flights, but says this work is undermined by the additional fuel burn caused by having to enter holding patterns or carry out non-optimised approaches. Spohr notes Single European Sky could save 10% in emissions. “It [the lack of progress] can be frustrating, but it doesn’t help. That’s why we need to continuously talk about it.”

Pressure on airlines to counter the environmental impact of flying continues to intensify, particularly within Europe where governments and regulators are looking at taxation as a mechanism to tackle the issue.

“I think this industry needs to face the fact that we have over-proportional visibility,” Spohr says. “We all know the famous 2.8% of CO2 share globally from aviation; if you look at short-haul, it is a lot less. But nevertheless is it is over-proportionally visible and being discussed.

“If you were in shipping, an industry [with] record profits while we speak, and more or less the same CO2 impact as we have, nobody talks about it. And if you were to ask who could afford more to invest in new technology, is it shipping or aviation? Well just look at the profits and the balance sheets.

“Aviation creates emotional reactions, mostly positive – it helps us to attract customers and staff – but in this one it probably works against us,” he says.

However, he believes the value of aviation – and thus the ability to promote a sustainable industry – is now better understood by governments as a result of the impact of first the pandemic and now the war in Ukraine.

“I think there is a more balanced perception of those two [arguments]. It is not ‘either or’. We can have connectivity and affordable air travel in Europe – and beyond – and at the same time reduce the environmental impact,” Spohr says.

“I think the industry has made progress. Unfortunately, it took a global pandemic, and now also a war, to wake people up, that freedom to move around, freedom to be in contact with other cultures, economies, nations and people – it’s not a given.”

“Aviation has proven on the cargo side that this world wouldn’t exist the way we know it without aviation.”

On the passenger side, Spohr points to the role of aviation plays in connecting different communities as having an element of peacekeeping.