The tough conditions seen in the air freight market are continuing into the second half of the year, as demand is dented by the China-USA trade spat and a slowing global economy.

Airlines will be wary that the situation may get worse before it gets better.

IATA’s latest data – released in early September and covering July – suggests the downturn is continuing into the second six months of 2019.

“Trade generates prosperity. It is critical that the US and China work quickly to resolve their differences.”

Air cargo data provider WorldACD concurs with IATA’s analysis: “Upheaval in international relations has been the order of the day this year,” it states in a late-August report. “And even though the worst effects of the US-instigated trade war(s) may still have to reach air cargo, the general sentiment in the world is obviously not doing the industry a whole lot of good.”

WorldACD adds: “Now that consumer goods have also been targeted for tariff increases, air cargo figures as from August may well take an even deeper dive than shown so far.”

It describes the first seven months of this year as “dismal” for air cargo.

When FTKs stopped growing in November 2018, it was for the first time since March 2016, reflecting the stark change in fortunes experienced by the sector.

In July this year, global air freight demand measured in FTKs was some 3.2% down year-on-year, IATA figures show.

Economic indicators do not suggest a reprieve is likely in the near term.

IATA notes: “Global trade volumes are 1.4% lower than a year ago, and trade volumes between the US and China have fallen by 14% year-to-date compared to the same period in 2018.

“The global Purchasing Managers Index (PMI) does not indicate an uptick. Its tracking of new manufacturing export orders has pointed to falling orders since September 2018. And for the first time since February 2009, all major trading nations reported falling orders.”

Amid this lower demand, capacity growth continues – and has outstripped demand growth for the past nine months. Figures show AFTKs were some 2.6% higher year-on-year in July.

The worst-performing regions in terms of demand during July were Asia-Pacific and the Middle East. They accounted for 35.3% and 13.3% of global freight demand respectively in 2018.

The declines in North America (23.7% of the global market) and Europe (23.4%) during July were more moderate.

The smallest markets – Africa (1.7%) and Latin America (2.7%) – were the outliers in seeing demand upticks, albeit they account for a tiny proportion of the global industry.

IATA states that “the US-China trade war and weaker manufacturing conditions for exporters in the region have significantly impacted the market”, adding that Asia-Pacific’s market size makes it “the major contributor to the weak industry-wide outcome”.

During the recent financial results season, many Asia-Pacific operators bemoaned the impact of the weak cargo market.

Air China saw its overall operating profit rise 1.5% in the first half of 2019, but said that significant losses in the cargo segment dampened the impact of stronger passenger demand. Group revenue was up 1.7%, on the back of a 5.2% increase in passenger revenues, but cargo revenues declined by 44%. 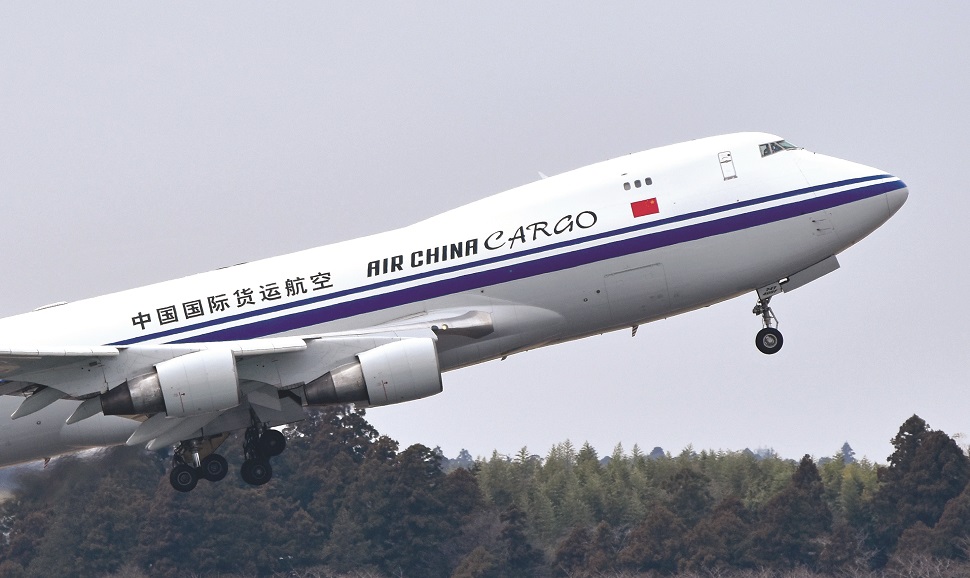 Cathay Pacific chairman John Slosar – who has since retired – meanwhile highlighted in early August sluggish cargo volumes and yield during the first half of the year, reflecting “weaker global trade brought about in part by US-China trade tensions”. ATKs climbed 3.6% but RTKs gained only 0.4%, pushing its cargo load factor down 4.9 points to 63.4%.

Japan Airlines’ cargo segment posted a 6.2% decline in operating revenue in the second quarter, which it blamed on macro-economic issues such as the US-China trade friction and its impact on the Japanese economy.

Compatriot ANA meanwhile reported that cargo was its worst-performing segment in the second quarter. Revenue contracted 18%. ANA likewise links this to the impact of US-China trade issues on the global economy, and falling volumes from China.

Elsewhere, Thai Airways International pointed to the US-China trade tensions as the primary reason why its RTKs fell by 16% in the second quarter.

Korean Air saw its cargo operating revenue decline by 9.6% in the first half. The carrier attributes this to the US-China trade row and macroeconomic conditions.

“Despite a sound economic backdrop supporting consumer spending, the US-China trade tensions continue to weigh on the region’s carriers,” IATA states, adding that “freight demand between Asia and North America has fallen by almost 5% in year-on-year terms”.

Among the dedicated cargo operators, Atlas Air Worldwide cited trade tensions as a drag on earnings during the quarter.

“Earnings in the second quarter were below our expectations” in part because of broader impacts on global air cargo markets, said William Flynn, Atlas Air chief executive, during an early August call.

ATSG was more positive, however, citing its focus on regional e-commerce markets, rather than global trade.

European airlines meanwhile reported a 2.0% year-on-year fall in freight demand in July, on a 4.2% rise in capacity.

The Franco-Dutch group said a “positive unit revenue impact” of €54 million ($60 million) in the passenger business was offset by a negative impact in the same amount within the cargo business.

Elsewhere, Lufthansa Group predicts a full-year EBIT margin of 3-5% for Lufthansa Cargo, but cautioned this is dependent on stabilisation of demand in the fourth quarter.

The sharpest drop among the regions during July was seen in the Middle East. Freight volumes were down 5.5%, on a 0.2% increase in capacity.

Latin American airlines were the only regional grouping to see freight demand outpace capacity during July. FTKs were some 3.0% higher, while AFTKs rose by 2.7%.

“The recovery of the Brazilian economy, to avoid a recession, was a positive development; however, concerns regarding the outlook for some key Latin American countries including Argentina remain,” IATA states.

African operators saw freight demand grow by 10.9% during July, but capacity growth was some 17%.

“Strong trade and investment linkages with Asia have underpinned a double-digit increase in air freight volumes between the two regions over the past year,” says IATA.