The year 2018 was another relatively sedate year for seat capacity growth in Vietnam, but potential new entrants still sense an opportunity in a steadily maturing market.

FlightGlobal schedules data shows that overall seats generated by Vietnam’s three major carriers – Vietnam Airlines, its low-cost unit Jetstar Pacific, and Vietjet Air – rose 4% in 2018 to 46 million. This was down from 6% growth in 2017, and the staggering growth rate of 34% seen in 2016.

Vietnam Airlines reduced its overall seats during the year by 1% to 22 million. Jetstar Pacific added 6% more seats to 6.6 million, while Vietjet Air was still in growth mode, adding 12% more seats to 1.8 million. 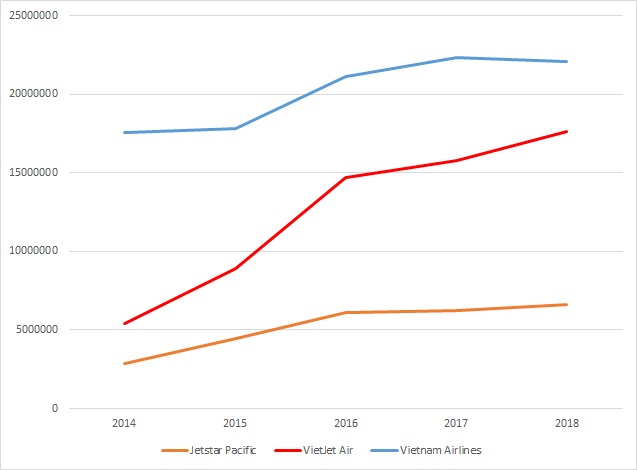 On international routes, however, the picture was somewhat different, with the three carriers providing 16% more international outbound seats, taking the total to 5.5 million. Still, international growth was considerably less than in 2017’s 41%, which was largely driven by Vietjet more than doubling its international capacity. 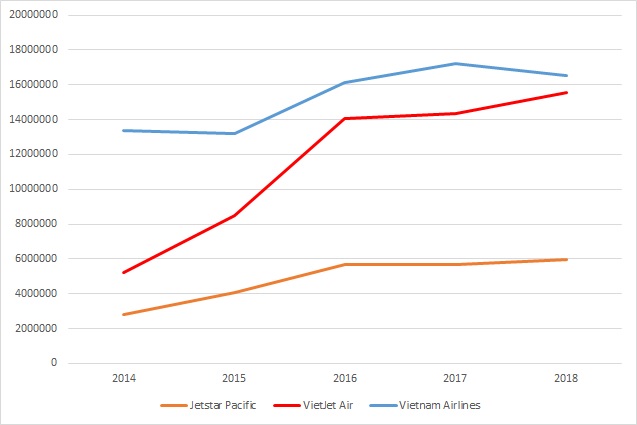 Both Vietnam Airlines and Vietjet state that they are profitable, but several challenges stand in the way of profitable growth this year.

Two new entrants could join the market. Bamboo Airways, a unit of real estate developer FLC, has already leased aircraft pending a start early this year. While its startup date has been a moving target since early 2018, it seems confident of eventually securing an air operators certificate. 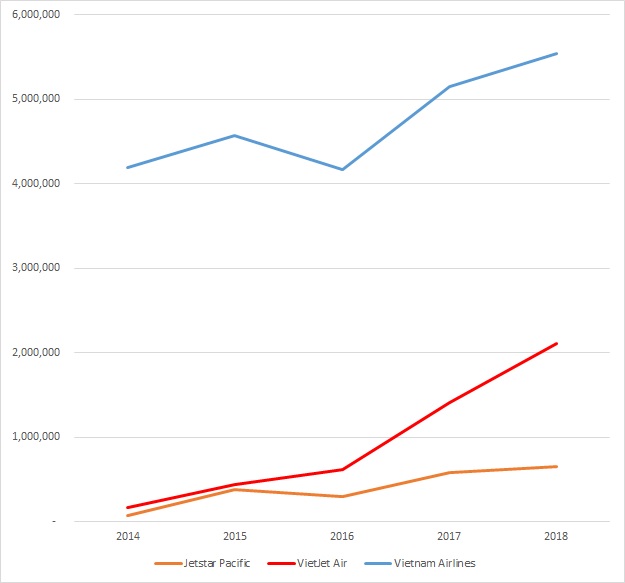 AirAsia is also hopeful. A joint statement from AirAsia and the Thien Minh Group reaffirmed their intention to launch a local carrier by signing a new memorandum of understanding. They gave no details of MOU's content, nor any mention of joint venture’s proposed launch date, fleet composition, and route network.

Both companies tout connections at the highest levels of the Vietnamese government, but somehow their coveted operating certificates remain elusive.

In addition, Vietnam continues to grapple with a shortage of slots at its primary airport, Ho Chi Minh City’s Tan Son Nhat, while the planned Long Thanh International airport isn’t likely to open until the late 2020s.

Vietjet, meanwhile, is under Civil Aviation Authority of Vietnam (CAAV) review following a series of bad landings that have raised questions about safety. In late December, a Vietjet Airbus A320 landed on a closed wrong runway at Nha Trang’s Cam Ranh International airport, prompting the CAAV to place it under “special monitoring” until mid-January.

On 29 November a two-week-old Vietjet A321neo suffered major damage to its forward undercarriage when landing at Buon Ma Thuot. The Goshawk-managed aircraft is still listed as in storage.

Added to those incidents, sources indicate that Vietjet continues to struggle with recruiting enough pilots to fulfill its growth plans.

One potential bright spot is the potential awarding of US Federal Aviation Administration category I status, which would allow local airlines to tap the large Vietnamese diaspora in the United States. FAA auditors have visited the country, but it is not clear when, or if, category I status will be forthcoming.

Vietnam Airlines, Vietjet, and Bamboo Airways have all made much of the potential for serving the USA market. Vietnam-USA traffic is now mainly served through Taipei Taoyuan, Seoul Incheon, and Hong Kong.

This year promises to be a notable one for deliveries to Vietnamese carriers. Flight Fleets Analyzer shows that as of 9 January, Vietnam Airlines, Vietjet, and Jetstar Pacific had an in-service fleet of 165 aircraft. By the end of the 2019 this is expected to grow to 194.

Most of this growth, around 20 aircraft, will go to VietJet, as it works through its orderbook of 217 jets – 100 737 Max 8-200s and 117 A321neos. It will also move away from being an exclusive Airbus operation, as it begins to take delivery of the Boeing 737 Maxes, of which it could take 15 examples during the year.