Figures collected by Cirium covering the 100 biggest airline groups by revenue in US dollar terms show collective revenues rose by around 8% to $782 billion in 2018. These airlines delivered a collective operating profit of just under $49 billion – around 14% lower than the same carriers in 2017. Net profits meanwhile fell more than one-fifth to $27.7 billion. 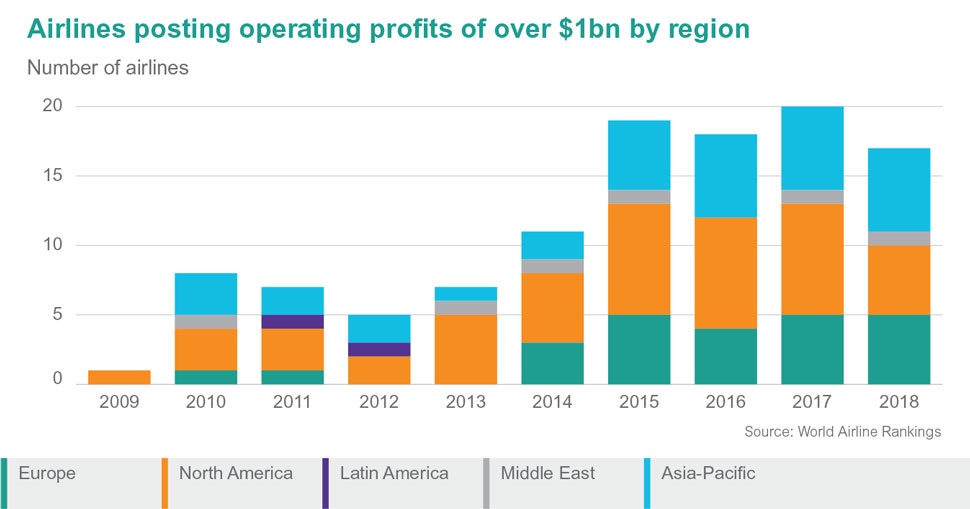 That leaves 83 airlines or groups out of the 100 biggest by revenue between them delivering a combined operating profit of $10 billion. Of the 77 biggest groups for which operating profits are so far available for 2018, just under one-quarter posted a loss.

The high numbers of airline groups posting high profit levels continues the trend evident during the strong profits cycle airlines have enjoyed since recovering from the financial crisis a decade ago.

Restructuring, consolidation, a largely benign environment and – in the latter years, at least – lower fuel costs have helped airlines enjoy an unprecedented run of profits – going beyond previous economic cycles.

Fuel costs, however, turned during 2018. Even though a sharp fall in the final quarter helped airlines enjoy stronger profits than they would have expected as the summer ended, there were clear signs in 2018 of profits coming under pressure.

That was evident even among the groups that still delivered the bulk of the industry profit last year. In 2017 there were 20 airline groups that delivered an operating profit in excess of $1 billion. But Alaska Airlines, Air Canada and JetBlue all fell short of that level in 2018.

And those 17 airline groups that did pass the $1 billion mark delivered combined operating profits of over $41 billion – around $2.5 billion more than they did in 2018.

The sharpest fall in profits came among North American carriers, largely reflecting the impact of higher oil prices. The relative lack of fuel hedging among carriers in the region means they more immediately feel the impact of major changes in the oil price.

But there is more balance between the leading operators, with five coming from North America and Europe, six from Asia-Pacific and one from the Middle East.

The big three carrier groups drive European profits – with a particularly strong year for IAG. While all three groups have developing interests in the low-cost segment, the bulk of the profits are still delivered through network operations – in particular British Airways, KLM and Lufthansa. The recovery of its market has aided further growth at Turkish Airlines, and while Ryanair profits took a hit last year, the carrier still recorded profits in excess of $1 billion for a fifth consecutive year.

Although its operating profits fell by one-quarter amid more challenging conditions, Emirates still produced a group profit almost $1.1 billion in 2018 – though at an airline level, this fell to just over $700 million.

A further sign of the tougher conditions taking hold of the industry in 2018 is the greater portion of leading carrier groups posting losses. While there were 17 carriers in the red – out of the 77 for which operating figures are available – there were only seven posting such losses in 2017.

Revenues rose by around 10% among leading low-cost operators in 2018, but profitability again suffered in this sector

Data covering 36 low-cost carriers that feature within the 100 biggest operators by revenue – either in their own right or as subsidiaries of larger groups – shows the segment's carriers accounting for around $112 billion in 2018. That compares with almost $102 billion the previous year.

That increase is roughly in line with the 10% climb in passenger numbers among leading low-cost carriers in 2018. The data, covering 37 operators, accounts for 1.13 billion passengers – around 30% of passengers carried by operators within the 100 biggest airlines by RPKs.

Collective operator profits, which are available for 33 of these carriers, totalled $8.2 billion last year. That compares with $11.8 billion in 2017. Profits at a net level, which cover 26 operators, were down even more sharply. Net profits almost halved from just under $10 billion to a little over $5 billion in 2018.

Southwest Airlines remains the biggest low-cost operator by all three financial measures, and while its profit levels slipped, it still delivered $3.2 billion in operating profits.

Ryanair remains the second-largest budget operator, but its operating profits slipped by 40% to a little under $1.2 billion in 2018. Despite increasing passenger numbers by 9% to over 142 million for the year ended March 2019 – including traffic from its Lauda subsidiary – yield pressure and higher costs ate into its profits. It is one of only two low-cost carriers to generate profits in excess of $1 billion, though.

JetBlue had in 2017 posted net profits of $1 billion, but its profits were hard hit in 2018 by rising fuel costs – and it continues to implement a company-wide cost-cutting programme that it unveiled almost three years ago.

EasyJet, the third largest low-cost operator, lifted its profits after a strong year. That included a 10% jump in passenger numbers during its financial year running to October, which in part reflects its launch of operations at the start of 2018 at Berlin Tegel after acquiring former Air Berlin assets.

It was generally a tougher year for Europe’s low-cost operators, however – one in which Icelandic carrier Wow Air ultimately collapsed. Norwegian continued to struggle to translate its rapid expansion into profit. Similarly, Eurowings' rapid moves to expand in the gap left by Air Berlin and Niki, amid rival competitive pressure in these markets from the likes of EasyJet and Ryanair's Lauda unit, have had an impact on the profitability of all three operators.

India is another market where low-cost carrier profitability has been hit. Again, this reflected a combination of intense competition and higher fuel costs, which, allied to currency pressure in India hit profitability. Even the country's largest and most successful operator, IndiGo, slipped to a pre-tax loss – its first such of the kind since 2011 – and its net profits were sharply cut.

This tough environment has not stopped IndiGo – nor indeed other Indian low-cost operators – from expansion, which is further accelerated by their efforts to exploit the grounding of Jet Airways earlier this year. IndiGo alone increased its traffic by one-quarter in the 2018 calendar year.