ANALYSIS: Puerto Rico advances effort to establish itself as hub

Puerto Rico wants to transform its international airports into centrally located hubs for air passengers and cargo flowing between Europe and Latin America.

It views such a transformation as a means to reverse the island’s air travel decline, boost its hurricane-hindered economy and support broader US interests.

But a regulatory application aimed at helping that vision become reality continues to face staunch opposition from some of the USA’s largest labour unions and one major US carrier – Delta Air Lines.

Opponents, among them the Air Line Pilots Association (ALPA), see Puerto Rico’s ambitions as threatening US jobs and businesses. They warn Puerto Rico might next support the right of foreign carriers to operate US-to-US routes, which is called cabotage.

“ALPA believes that the… application is the first step in a campaign to obtain cabotage relief for foreign carrier hub operations at San Juan, which would be detrimental to US aviation interests,” the union says in its latest letter to the DOT.

US cabotage laws prohibit “the carriage of revenue traffic by a foreign air carrier solely between two US points,” according to the DOT.

The tussle, playing out in regulatory filings, stems from the Puerto Rican government’s June application to the US Department of Transportation (DOT).

The US territory asked the regulator to grant foreign airlines permission to transfer, between them, cargo and passengers at Puerto Rico’s international airports, which include those serving Aguadilla, Ponce and San Juan.

That means, for instance, a passenger could fly a European airline from London to San Juan, then transfer onto a Latin American airline headed to Brazil.

Puerto Rico requested other related authorisations, including the ability for foreign airlines to transfer passengers and cargo to US-bound flights operated by US airlines.

It also concedes existing Open Skies air service agreements between the US and foreign countries already permit “many” of the types of transfers Puerto Rico envisions.

But many foreign airlines are not fully aware of their rights in those agreements, says Joanne Young, an attorney representing Puerto Rico with its application.

Puerto Rico therefore views a formal US sign-off as key to spreading the word and to promoting Puerto Rico as a stopover, she adds.

The DOT did not respond to a request for comment about Puerto Rico’s application or its review timeline.

Puerto Rico, which sits roughly between Europe and both Central America and parts of South America, views its location as perfect for capturing traffic flowing between those regions.

“There [are] a tremendous number of flights that go from Europe, particularly Northern Europe, to South America and Central America,” says Young, who is also counsel to Florida-based Spirit Airlines.

“Puerto Rico is smack in the middle,” she says.

Airlines operate an average of about 140 daily flights between Europe and Latin America, though flights to northern Latin America pass closest to Puerto Rico. 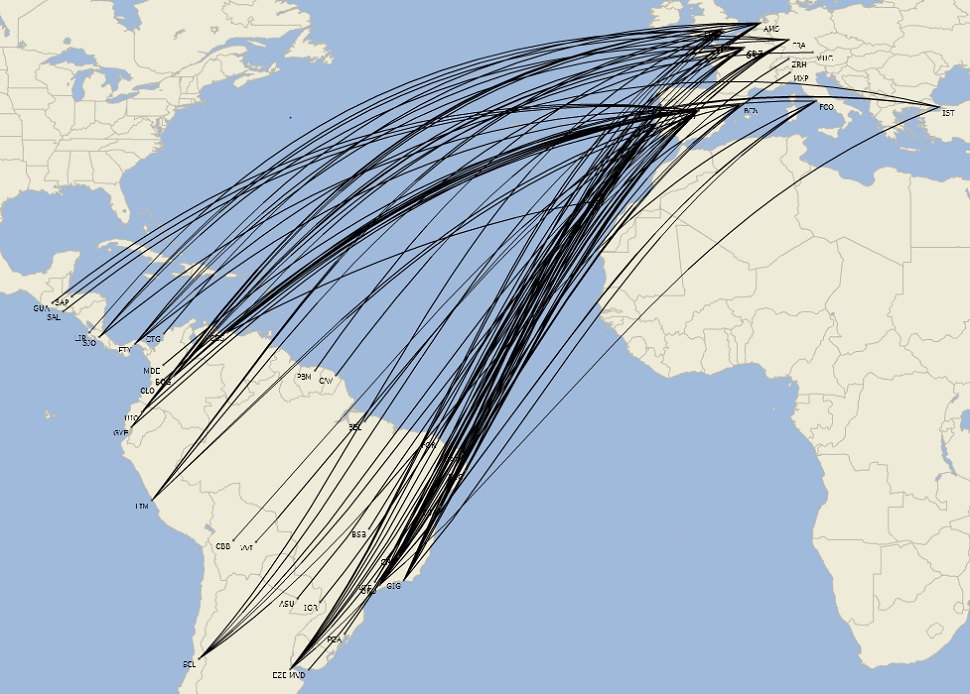 As a result, San Juan’s airport operates at less than half its capacity, Puerto Rico says.

ALPA came out early against Puerto Rico’s plan, filing an initial opposition letter in June followed by a second in mid-August.

The union argues Open Skies agreements make Puerto Rico’s application unnecessary. It dismisses the notion that foreign airlines do not understand their rights as provided by those deals.

“There is simply no need for the type of flexibility sought by Puerto Rico in its current application”, the union’s June filing says.

“ALPA believes that the true intent of the application is to provide a steppingstone to cabotage”, it adds.

The union notes the state of Alaska used a similar means to work toward legislation permitting foreign airlines to operate US-to-US flights from the state.

Other major US airlines did not respond to requests for comment, but Young says her client, Spirit, supports Puerto Rico’s application.

“They see it as a plus for them,” she says, noting Spirit could pick up travelers coming off international flights.