It could be the mid-2050s before there is an equal split between female and male incumbents in senior executive positions at airlines, according to FlightGlobal’s latest annual survey of the world’s biggest passenger operators.

Data for 2019 shows another minor year-on-year uptick in the proportion of women employed in such roles – at 13% this year versus 12% in 2018 and 11% in 2017 – but that the industry still significantly lags trends in the wider economy. 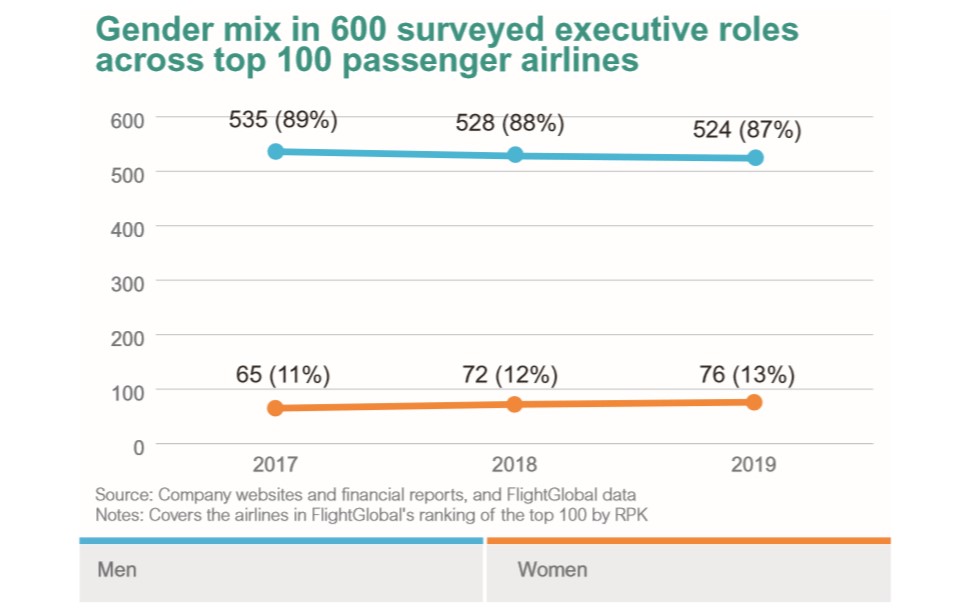 Extrapolating the average growth in female incumbents since 2017 – at six of the 600 surveyed roles per year – suggests it could be around 2057 before gender parity is achieved, illustrating the scale of the challenge ahead to address this imbalance.

The survey – of carriers and groups that feature in FlightGlobal’s top 100 World Airline Rankings by 2018 revenue passenger-kilometres – also shows that operators overwhelmingly look internally when appointing new chief executives, and generally towards candidates in positions that are dominated by men. This suggests a wholesale shift in the C-suite gender balance is only likely if airlines change those habits and/or become better at promoting female talent.

Splitting the results geographically demonstrates that North America continues to lead the other regions in terms of female incumbents among its senior executives, with 21% of surveyed roles taken by women – eight percentage points ahead of second-placed Europe. 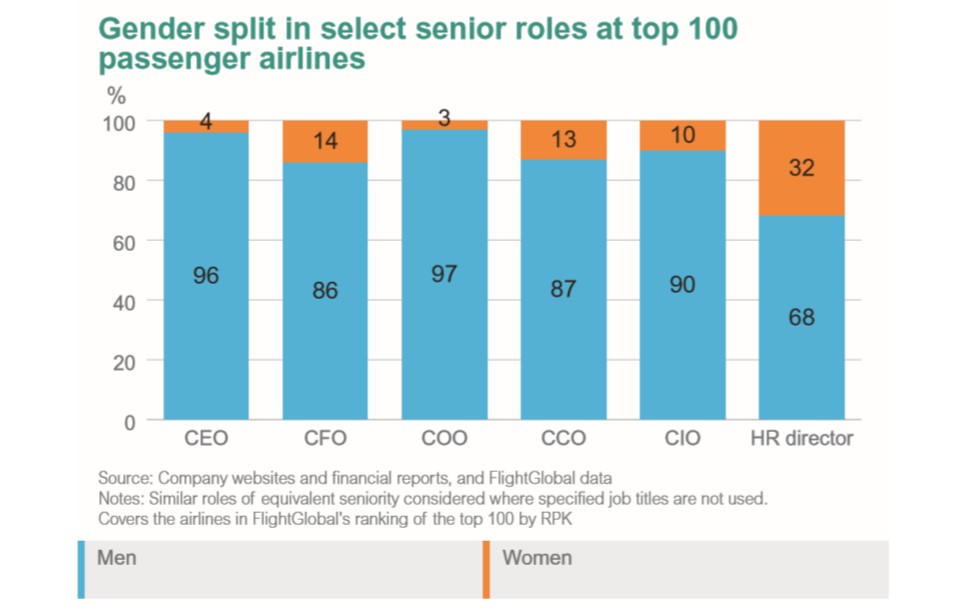 The number of female chief executives among the top 100 airlines has risen from two in 2018 to four this year. However, this only restores the total number of women in the top job to the level seen in 2017’s survey. Furthermore, South African Airways’ Zuks Ramasia is in the role on an acting basis and has stated that she does not wish to take the position permanently.

The three permanent chief executives across the top 100 airlines are: Air France’s Anne Rigail, who was appointed in December 2018 and is the survey’s only new entry this year; Air Europa’s Maria Jose Hidalgo; and VietJet Air’s Nguyen Thi Phuong Thao. 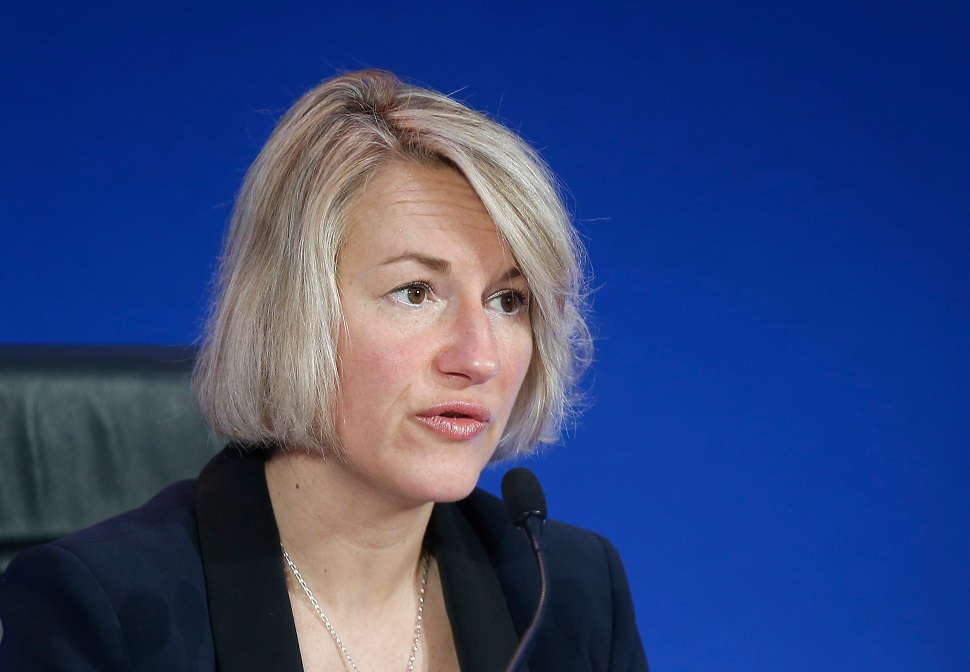 The careers of Hidaldo and Nguyen offer limited lessons in terms of women making their way through the ranks at airlines – the former being part of the family that owns Air Europa’s parent company and the latter being VietJet’s founder.

Rigail, however, is unique among her peers within the top 100 airlines in being the only chief executive to step into that role – female or male – from the position of vice-president for customers, or equivalent (such a role is not ubiquitous among airlines and was therefore not considered for the survey).

PATH TO THE TOP

The survey shows that other paths to the top job are much more common, however, favouring roles dominated by male incumbents.

Indeed, some 25 of the incumbent airline chief executives stepped into the position from a job with the same or equivalent title – the vast majority at another airline.

The second most common source for a chief executive – at 20 incumbents across the top 100 – was from the role of president or equivalent. This title is not ubiquitous among airlines and was therefore excluded from FlightGlobal’s survey, but a notable exception to the male-dominated roster in that position is JetBlue’s Joanna Geraghty. 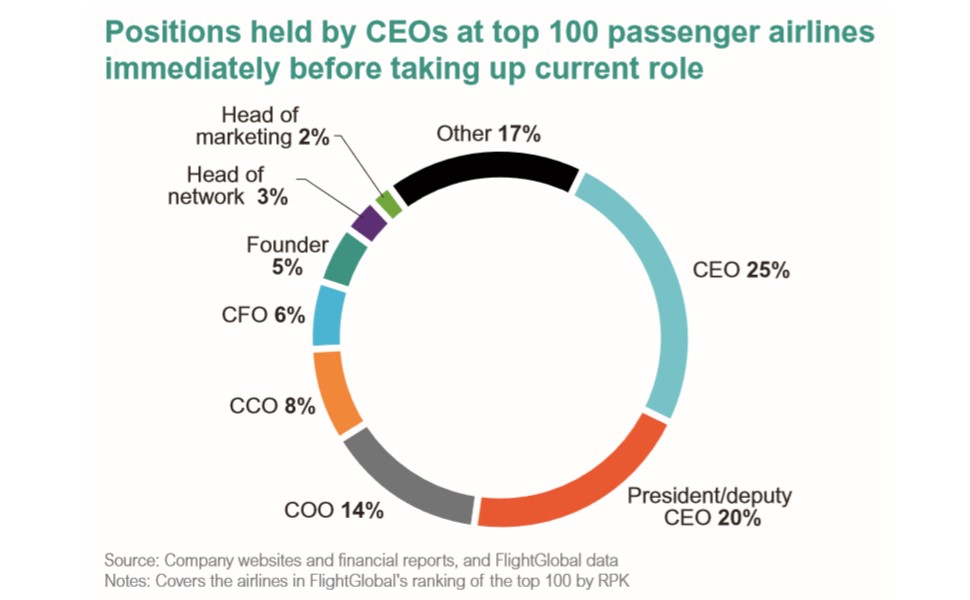 Elsewhere, some 14 current chief executives stepped into the role from a chief operating officer position or equivalent – the latter position being held by women at only three of the top 100 airlines in this year’s survey.

Meanwhile, some 79 of the incumbent chief executives at the top 100 airlines were internal appointments – which means they were promoted from within the same carrier or group.

That level of internal appointments appears to put the airline industry on a par with the wider economy – if on the higher side of trends. For example, a report published last year by executive search firm Heidrick & Struggles, entitled Route to the top 2018, showed that across the wider economy, 84% of chief executives in the USA had been promoted from within, while the average across a basket of 12 European countries was 64%.

Among the 21 airline chief executives in this year’s survey who are considered external appointments, many involve career executives switching between state-owned enterprises.

It is notable that one of the few genuine external appointments of an airline chief executive in recent years was that of a woman: former EasyJet chief executive Carolyn McCall, whose previous role was as head of Guardian Media Group. She has since moved back into the media industry, taking the top role at UK broadcaster ITV.

The preference for internal candidates shows why efforts to attract more women into less-senior positions – such as pilot or engineering careers – might be the key to eventually improving the gender mix at the top of carriers, unless an appetite emerges for external appointments.

One factor that may aid a shift towards female representation at the top of airlines is that the average chief executive tenure across the top 100 carriers is low compared with that in the wider economy – potentially meaning airlines will have more opportunities to appoint women.

The median term of current chief executives across the top 100 airlines is four years, while the overall average is around 6.5 years.

Research by Equilar, released in 2018, showed the median chief executive tenure at large-cap companies was five years at the end of 2017, and the average 7.2 years.

Across the top 100, no airlines have a majority of female incumbents in the surveyed positions. 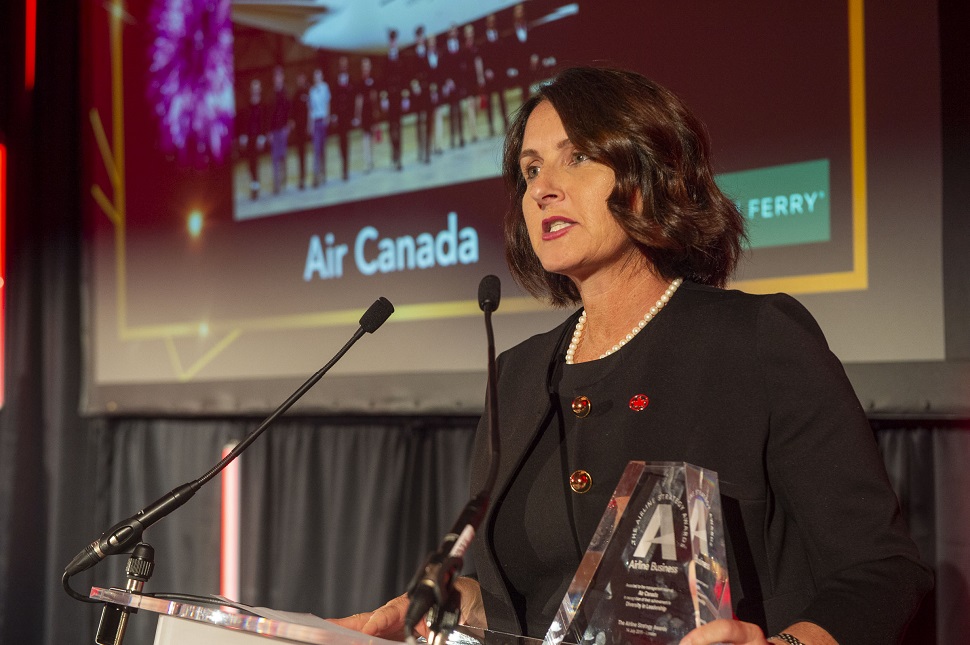 A further 20 carriers across the top 100 employ women in two of the six surveyed roles.

Some 52 operators employ men in all six surveyed roles.

In terms of performance by airline type, low-cost carriers again demonstrated a slightly better gender mix among senior employees than their network counterparts – albeit the gap is closing.

Across the 30 low-cost operators in the top 100 ranking, some 14% of surveyed roles were taken by women. This compares with 12% of roles across the remaining carriers. This year’s results reflect a narrowing of the gap between the business types; in 2018, low-cost operators saw 17% of surveyed positions held by women, with network carriers at 10%.

This year’s survey shows gender diversity in the C-suite of airlines continues to lag that seen in the wider economy.

For example, Grant Thornton’s survey of 8,000 leaders at mid-size businesses from 35 countries, released earlier this year, showed some 15% had a female chief executive or equivalent, versus 4% across the top 100 airlines. Some 34% had a female chief financial officer, versus 14% of airlines, while the split was 18% versus 3% respectively for chief operating officer; 17% versus 13% for chief commercial officer; 16% versus 10% for chief information officer; and 43% versus 32% for HR director. 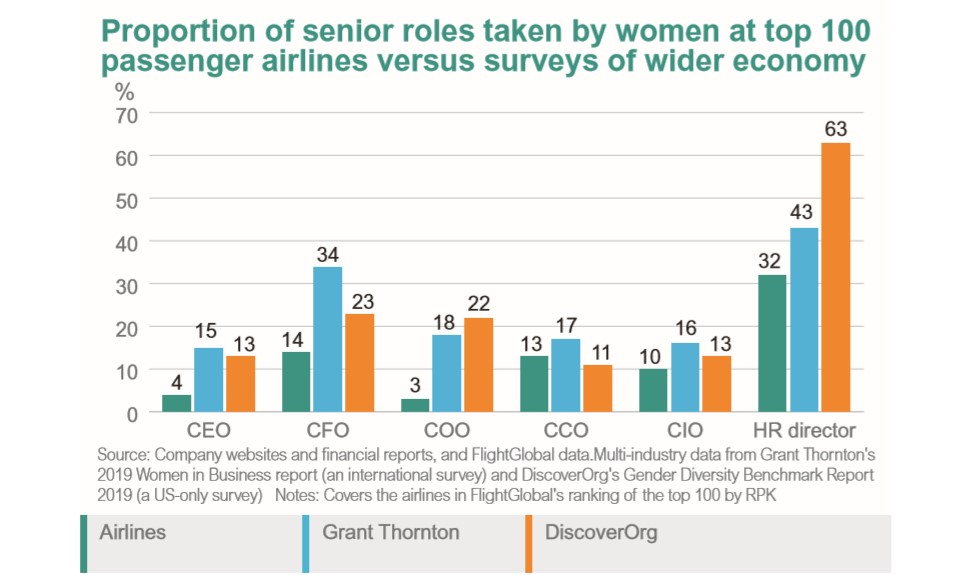 Meanwhile, in the USA, DiscoverOrg’s recent Gender representation in the C-suite report – published in May this year – surveys several roles at Fortune 1000 companies (essentially the largest US firms). It similarly shows airlines lagging the wider economy.

REST OF THE C-SUITE

There has, however, been an increase in female incumbents in three of the six surveyed airline roles over the past 12 months: chief executive, chief financial officer and chief commercial officer.

Indeed, the number of female chief financial officers among the top 100 carriers has risen from 10 in 2018 to 14 this year.

While the fluctuations in numbers can partly be explained by the churn of carriers that feature in the top 100 list, there have been some significant female appointments in the past 12 months.

The survey reflects the fact that, for example, Qantas announced in May that chief customer officer Vanessa Hudson is succeeding Tino La Spina as chief financial officer.

In the chief commercial officer position or equivalent, the number of female incumbents has risen from 10 last year to 13 in this year’s survey. Again this is in part explained by churn in the carriers included in the top 100, but there have also been some key appointments. 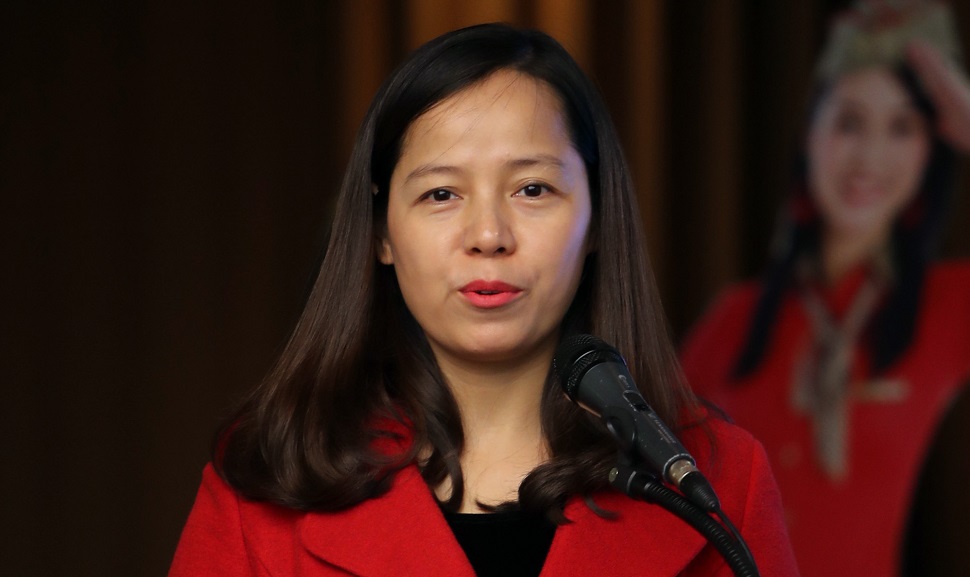 Meanwhile, the number of female chief information officers, or equivalent, is flat year-on-year at 10. The role remains an outlier, however, in that the female incumbents are weighted towards the biggest airlines in the top 100, largely in contrast to the other surveyed positions.

Indeed, the leading two carriers among the top 100 both have female chief information officers: Maya Leibman at American and Linda Jojo at United.

The number of female HR directors has dropped to 32 from 36 year-on-year in the latest survey.

North America continues to lead the way for gender diversity among the top 100 airlines, with Middle Eastern carriers at the other end of the scale.

This year, some 21% of C-suite roles considered in the survey were taken by women across the 14 North American operators in the top 100, which is flat with the level seen in 2018. Removing the HR director function from the survey sees this figure drop to 14% – but that still puts it ahead of carriers in the other major regions.

Among the 36 Asia-Pacific operators featured in the ranking, 11% of surveyed roles are taken by women – higher by one percentage point compared with 2018’s survey – dropping to 8% if the HR director function is not considered.

The eight Latin American operators across the top 100 meanwhile employ women in 10% of the senior roles surveyed – up from 9% in 2018 – or 8% when the HR director function is discounted.

The eight Middle Eastern carriers in the list employ women in just two roles, or 4% of positions – down from 6% in 2018 – dropping to one, or 2.5%, if the HR director function is not considered. El Al is responsible for both of these female incumbents: chief financial officer Dganit Palti and vice-president of human resources Yehudit Grisaro.

Just three African carriers feature in the top 100, with three of the 18 roles surveyed, or 17% – flat with 2018’s level – taken by women, dropping to two, or 13%, when the HR director function is discounted. All of those women are employed by South African Airways.

NOTES: FlightGlobal’s survey of gender diversity in the top 100 airlines is based on publicly available data. The primary sources are company websites, financial reports and FlightGlobal data. Research was undertaken in mid-June 2019. Given the fluid nature of employment, the survey can only give an indicative snapshot of the industry. The 100 airlines and groups surveyed are drawn from FlightGlobal’s 2019 ranking of carriers by revenue passenger-kilometres (RPKs). Similar roles of equivalent seniority are considered where the specified job titles are not used.