FlightGlobal schedules data shows that Thailand's top carriers generated 93 million seats in 2018, up 5.5% from 2017, but markedly slower than the 15% average annual growth seen between 2014 and 2017. 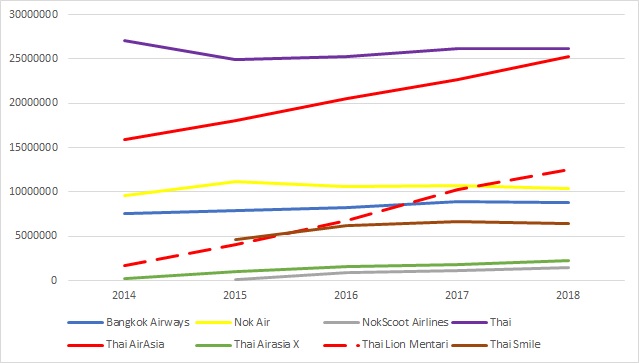 All data from FlightGlobal schedules

Domestic capacity among the leading airlines for 2018 declined by 1.2% to 46.7 million seats, a sharp reversal from average domestic seat capacity growth of 14% in the period 2014-2017.

Outbound international capacity, however, grew by 21% to 23 million seats, a massive increase compared with the 2.8% average growth in 2014-2017. 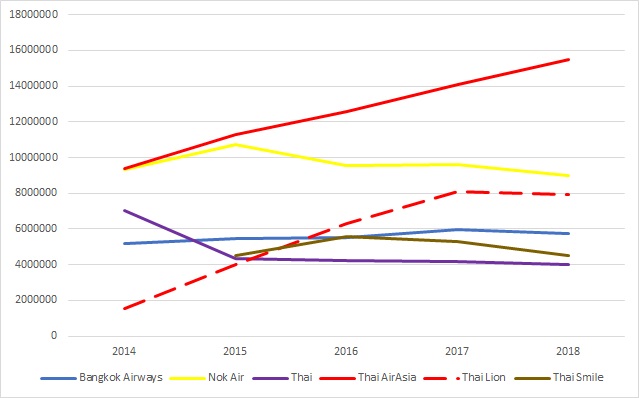 This improved international growth on the part of Thai carriers was largely due to ICAO's lifting of Thailand's red flag status in October 2017. This allowed low-cost carriers such as NokScoot, Thai AirAsia X, and Thai Lion to launch services to Japan. When the red flag was imposed in late 2015, it curtailed North Asian expansion plans on the part of Thailand carriers, namely NokScoot and Thai AirAsia X.

China accounts for half of international seats, amounting to 1 million during January 2019, followed by Japan, Singapore, India, and South Korea.

This year will see the Thai market remain among the most competitive in the region. Times will continue to be difficult for low-cost carrier Nok Air. The carrier’s losses in the three months to 30 September tripled to Bt1.52 billion ($48 million). The carrier has yet to name a permanent chief executive after Piya Yodmani quit in August 2018.

Thai Airways International swung to a loss of Bt3.93 million in the three months to 30 September. The main driver was higher fuel prices, but the carrier's competitive situation is growing more challenging, both domestically and internationally. Thai Airways International is in limbo, as it awaits approvals to obtain up to 23 new aircraft, of which two-thirds will be widebodies and one-third narrowbodies.

The problems for both carriers can be largely summarised in two names: Thai Lion and Thai AirAsia. Both budget carriers have steadily ratcheted up capacity, backed by the immense orderbooks of Lion and AirAsia. Flight Fleets Analyzer shows that Thai Lion operated 30 jets (27 Boeing 737s and three Airbus A330-300s) at the start of 2018, growing to 34 at the beginning of 2019, with the addition of four 737s.

Thai AirAsia added six A320-family jets during 2018, taking its fleet of the type to 62 aircraft.

Lion Air Group has 27 aircraft planned for delivery in 2019, and AirAsia 35. Given saturation in other markets such as Indonesia and Malaysia, a good number of those jets are likely to make their way to Thailand.

Though Thai AirAsia rules Thailand’s domestic market, it is far from immune from cut-throat competition. In its quarter to 30 September, it swung to an operating loss of Bt531 million, a sharp reversal from the Bt614 million profit in the same quarter during the previous year.

Thai Lion does not disclose numbers, but it is certainly affected by the same dynamics as its rivals.

While 2018 had its challenges in Thailand, 2019 could be worse, particularly if there is any softening in China's economy, which would have a detrimental impact on the pivotal Chinese tourist business. Even more important will be the price of fuel, the final arbiter in Thai airline profitability.