Reports that US president Donald Trump sided against the USA’s big three airlines during a mid-July “heated showdown” about Gulf carrier state-subsidy allegations do not mark the first time he has had tough words for American Airlines.

While the words in this case are unlikely to bring an end to the years-old Gulf spat, they do appear to leave American, Delta Air Lines and United Airlines without an important ally in their fight for action to be taken against Qatar Airways.

Citing interviews with 10 people who were at the White House meeting, NBC News reports that Trump appeared to be in agreement with Atlas Air, FedEx and JetBlue in believing that Air Italy – in which Qatar Airways has a 49% stake – is within its rights to operate US services.

According to one source’s account of the meeting, as quoted by NBC News: “There was a lot of yelling.”

In this context, it is noteworthy that Trump has a history with American. He made an ultimately unsuccessful bid for its parent company AMR in 1989.

The consequent dialogue between then-property tycoon Trump and AMR chairman Robert Crandall was covered in the 28 October 1989 issue of Flight International, in a story headlined ‘Trump and AA in war of words’. 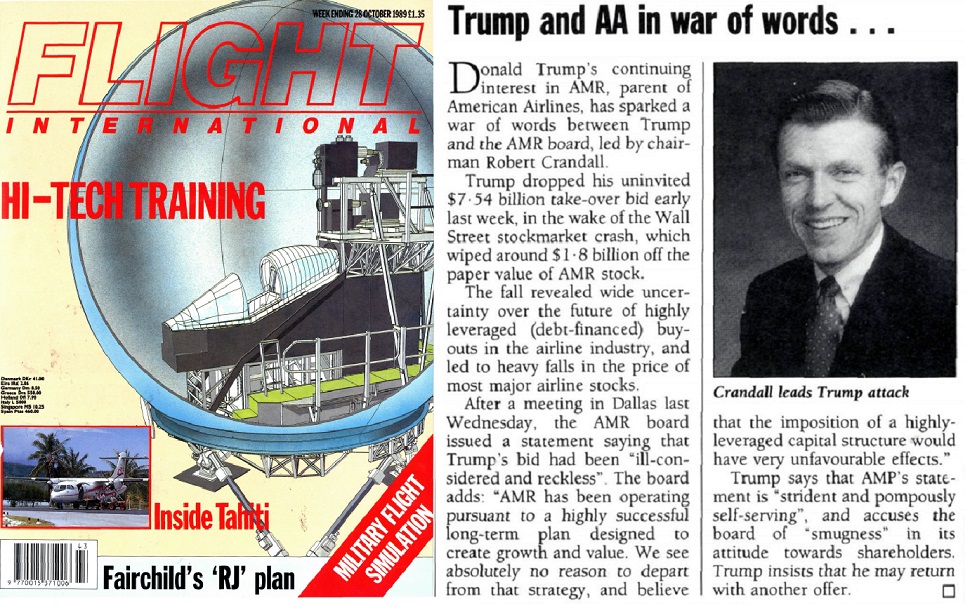 AMR described Trump’s bid as “ill-considered and reckless”, and argued that “the imposition of a highly leveraged capital structure would have very unfavourable effects”.

Trump hit back, dismissing AMR’s statement as “strident and pompously self-serving”, and accusing it of “smugness” in its attitude towards shareholders.

His interest in American’s fortunes appeared to endure.

Indeed, in February 2013, Trump tweeted: “I believe in free markets but allowing a merger of US Air & American Airlines is totally ridiculous! Will control most of US market.”

In his latest encounter with the American, Trump is said by NBC News to have pointedly asked the carrier’s chief executive Doug Parker why his airline’s share price had been dropping in a buoyant stock market.

The White House meeting brought the president together with a number of airline chief executives to discuss the latest iteration in the years-old spat between US majors and their Gulf counterparts.

Parker and United Airlines chief executive Oscar Munoz – working together under the Partnership for Open & Fair Skies banner, alongside Delta Air Lines – were lobbying Trump to take action against Qatar Airways. They allege that the Middle Eastern airline is using state aid to fund its investment in Air Italy and thereby undertake proxy fifth-freedom flights to the USA.

According to NBC News, the chief executives of Atlas Air, FedEx and JetBlue – through the US Airlines for Open Skies group – were at the meeting to argue that the big US network carriers are not considering the potential wider, negative impact of efforts to restrict Air Italy. They also consider the network carriers to have a history of attempts to restrict competition.

NBC News’s version of events was that Trump was persuaded by this view, during what it describes as a “heated showdown” that also involved Qatar Airways chief executive Akbar Al Baker.

Days earlier, there had been a clue that the US president might not lend a particularly sympathetic ear to the big three carriers’ complaints.

On 8 July, Qatar’s emir Tamim bin Hamad Al-Thani was at the White House, along with Al Baker and Trump, for a signing ceremony (pictured below) to firm the Qatari flag carrier’s order for five Boeing 777 Freighters.

Boeing Commercial Airplanes chief executive Kevin McAllister said at the event: “It is an honour to be signing this agreement today with Qatar Airways, who has been our long-haul partner for more than 20 years. As one of the world’s leading air cargo carriers, we are delighted that Qatar Airways continues to expand its freighter fleet with the 777 Freighter and we deeply appreciate their business and positive impact on Boeing, our employees, suppliers and communities.” 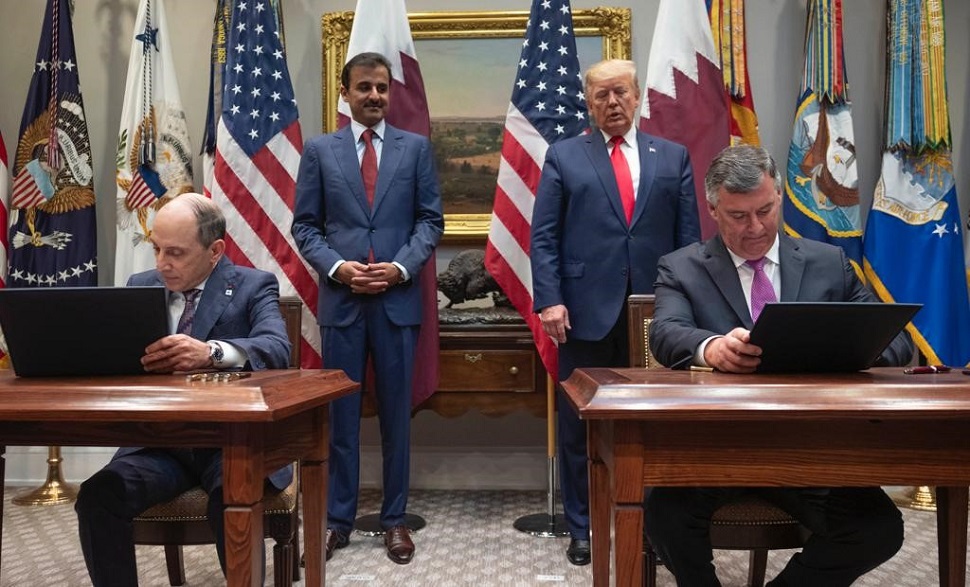 McAllister’s words reflect the importance of Qatar Airways’ business to the US airframer, and Qatar itself is seen by the US government as an important ally – particularly amid tensions with Iran.

Al Baker meanwhile has directly addressed his relationship with Trump in the past, acknowledging that he could not take the US president’s support for granted.

In February last year – mindful of an approaching storm over the launch of Air Italy – he described the Trump as a friend, but added: “I am not a big body builder so I cannot have fights with presidents of other countries… There will always be misunderstandings between friends.”

But it seems those misunderstandings might not extend to Qatar Airways’ investment in Air Italy.

A post-meeting statement from the Partnership for Open & Fair Skies suggests it has not lost hope, however, that Trump might support its cause: “The president shares our concerns and instructed us to keep working with the US Department of Transportation, which we plan to do,” the organisation states. “We thank the president for his time and attention, as well as his concern for the 1.2 million Americans who rely on a strong US airline industry.”

American’s statement on the meeting was equally philosophical. “Today, we met with President Trump to discuss Qatar’s continued violation of its 2018 agreement with the United States,” it states in reference to a 2018 US-Qatari accord which was meant to bring air-service disagreements to an end. “We asked President Trump personally to do everything he can to stand up for American workers and ensure that all airlines are playing by the rules. Our 130,000 extraordinary team members and the investments we are making in our business enable us to compete against any airline in the world, but we shouldn’t be forced to compete against governments that don’t play by the rules.”

None of carriers from the side that reportedly gained Trump’s favour at the meeting have publicly commented on the discussions.