WestJet's executives are describing 2018 as a year of rebuilding – a period during which the company's financial results suffered amid a wholesale transformation that was aimed at eventually making WestJet stronger.

That message is not new – WestJet's top brass for months have urged investors to be patient while they sought to transform WestJet into a global airline.

But chief executive Ed Sims says the plan is finally coming together.

During the company's 2018 earnings call on 5 February he notes WestJet will soon deploy new Boeing 787-9s, and he points to positive economic indicators, including slowing cost-creep and positive unit revenue trends.

"Throughout 2018, we faced compounding headwinds that resulted in our business delivering results well below where we could and should perform," Sims says, calling 2018 "a pivotal year of both transition and execution".

"We are pleased with the early results that provide… validation of this direction," he adds.

WestJet undertook several massive initiatives in 2018, chief among them the June launch and subsequent expansion of ultra-low-cost unit Swoop, which ended 2018 with a fleet of six 737-800s.

Most of those efforts were part of WestJet's broad strategy of transforming from a point-to-point low-cost carrier into what Sims calls a "high-value network carrier".

"We are incredibly conscious of the heavy lifting that we have ahead of us," Sims says on 5 February.

That heavy lifting includes WestJet's plan to launch 787-9 flights this spring from Calgary to Dublin, London (Gatwick) and Paris.

Those aircraft will have lie-flat seats, enabling WestJet to capture a slice of high-yielding business traveler traffic, executives say.

Bookings on its 787 flights are already hitting or exceeding targets, with "strength particularly evident in our premium cabins", Sims says. 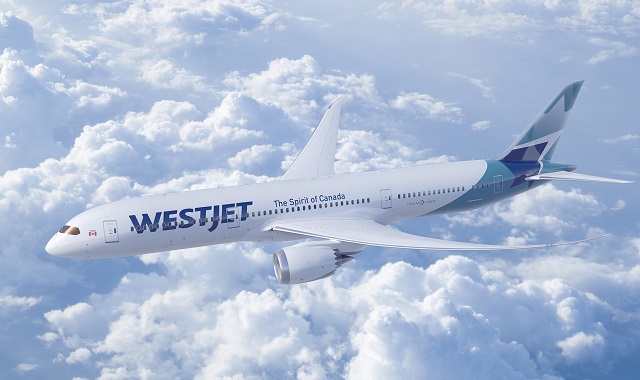 WestJet intends to launch its first 787-9 transatlantic flight on 28 April, to London (Gatwick)

Sims attributes the reversal to factors such as the rollout of so-called branded fares – fare groups that provide varying levels of extras, from fee-for-checked-bag-and-seat-assignment "Basic" to all-inclusive "PremiumFlex".

At the end of 2018, 36% of WestJet's customers were opting up to fares other than Basic, compared to a 6% uptake rate earlier in the year, Sims says.

"Through these initiatives we drove a significant shift in unit revenue performance," Sims says.

He attributes better-than-expected unit cost to mild weather and resulting solid operational performance, and to policy changes under which WestJet provides less generous compensation to customers affected by cancellations and delays.

"We expect this positive trend in unit revenue growth to continue," Taylor says.

WestJet announced on 5 February it trimmed its 2019 capacity growth to 6-8% ASMs, down from previously anticipated 6.5-8.5% growth.

Talyor calls the move a "tactical adjustment to our schedule in response to competitive and economic conditions".

"WestJet appears to be learning from past mistakes as they take a more conservative approach to capacity growth in the domestic market," says a 5 February report from financial services company Cowen.

WestJet expects it RASM will increase 0.5-2.5% year-on-year in the first quarter of 2019 and 2-4% for the full year, thanks largely to its multitude of revenue-boosting initiatives.

It predicts CASM (excluding fuel and profit sharing costs) will be flat to up 2% year-on-year in both the first quarter and for the full year. The unit cost jump reflects the anticipated expense of placing 787s into service and a bump in employee costs results from expected new labour contracts, the company says.